St. Paul’s is a community of faith. We serve Jesus Christ through worship, prayer, study, and service in the tradition of the Episcopal Church in the Anglican Communion. We warmly welcome all persons to join with us in Christian worship and fellowship. 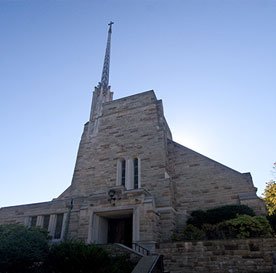 St. Paul’s has a long history of serving the community and the Diocese of New Jersey. Church services include two celebrations of the Eucharist on Sunday and a healing service on Thursdays. Holy days are celebrated together with additional liturgies throughout the year, such as sung Evensong and Festivals of Lessons and Carols. The parish also participates in numerous community activities, including a monthly Mission Kitchen at St. John’s Church in Elizabeth, bread deliveries, toy drives, and other outreach programs.

Music has been an integral part of the history of St. Paul’s including a choir of men and boys which existed for nearly a century. From the 1980s on, the choir has consisted of men and women supplemented by professional singers. There is also a hand bell choir, as well as children’s choir opportunities at special services during the year.

The creation of St. Paul’s Day School in the 1950s has been an important feature of the parish. The school’s preschool and kindergarten programs provide an enriching experience for children ranging in age from two-and-a-half through six years of age. The Day School strives to enhance children’s emotional, social, intellectual, spiritual and physical growth in a Christian setting of nurturing and love. Additionally, the church offers a Time for Twos preschool program for those children who are not quite old enough to start at the Day School.

Portions of the preceding material are taken from Highlights of the Episcopal Church in Westfield, New Jersey, by Arthur C. Kammerman.

Information about the Episcopal Church

The official website of the Episcopal Church of the United States.

News and information about the Episcopal church.

Anglicans Online is staffed by an unpaid group not affiliated officially with any church. The site is updated every week because of the belief that global communications can help foster global unity in faith. The issues that unite us are so much stronger and larger than the issues that might sometimes divide us.