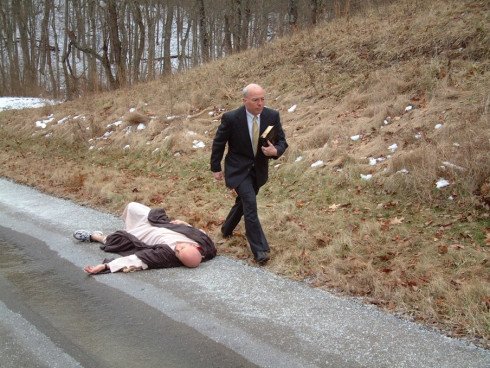 A Beautiful Day in the Neighborhood

Now, I’m not someone to begin a sermon with a gratuitous lawyer joke.  Actually, I am, but there are far too many lawyers in our parish to make that prudent.  So, no lawyer jokes, but did you notice the first six words of today’s Gospel reading.  “Just then a lawyer stood up.”  Now, you just know that nothing good is going to come of this.  It’s all downhill from here.  This is as good as it’s going get.  And the lawyer asks a short question, which is a mercy in a profession that calls a 10,000 word document a brief.  Sometimes the hardest questions to answer are the shortest; like ‘what is the meaning of life, why did the chicken cross the road, and which is the greatest commandment?’  And rather like a prosecutor attempting to tie a witness in an impossible-to-get-out-of knot, the lawyer hurls that last one at Christ.  But if there’s anyone who can sidestep a gotcha question it is Jesus, and with a flourish of his hand and a shimmy of his feet he not only escapes this trap, but transforms it into the birth of one of the greatest short stories in world literature.

The name we give to the hero of the story has become code for all that is kind and compassionate in the human spirit.  Down the centuries this parable has inspired millions to acts of mercy.  It has comforted the sorrowful, soothed the hurting, restored crushed souls.  It has given us a nice feeling.  It’s about being kind to people and doing good to others.  And it can make us all misty-eyed and sentimental.  Or not.  Because if we take the Parable of the Good Samaritan as a source of comfort then we’ve got it badly wrong.  Jesus didn’t tell it in order to make the lawyer feel comfortable.  It is not a pat on the back, but a poke in the ribs.  And if I do my job in the next few minutes you will never again go to the parable of the Good Samaritan for comfort, you will be driven to despair by it.  You will maybe even wish you had never heard of that wretched road to Jericho, that miserable victim of a mugging, those callous religious leaders, and that heathen with a heart.

Jews and Samaritans.  Hatfields and McCoys, Hutus and Tutsis, Palestinians and Israelis, North and South Koreans, Northern Irish Protestants and Catholics, or any other ethnic or cultural enemies you care to name.  Jews and Samaritans had important things in common, including a shared history, and a land that had been home to each, but was now separated by a violent enmity.  Let’s understand how much Jews and Samaritans hated each other.  Jews saw Samaritans as lawbreakers, heretics, and  heathens.  Around 700 years earlier the Hebrew land of Samaria was conquered by the Assyrian Empire, the people were taken into captivity, and ever since the Samaritans had been a mixture of cultures, races and religions.  They were not ‘pure’ according to the Hebrew definition of pure, and they did not observe much of the Old Testament law.  On the other hand, Samaritans saw Jews as self-righteous, arrogant hypocrites.  So, here is Jesus talking to a Jewish lawyer and a Jewish audience and he asks, “Who is the victim’s neighbor?”  Is it his fellow-Hebrew – the respectable leader of his own people?  Is it the man who is ‘one of us’, his brother, his compatriot?  Or is it the man who is not from our tradition, the man who isn’t welcome in his home, the man who would cause him to publicly disown his own daughter if she were to marry him, the man who wants him dead?  Jesus says, “That person whom you have every reason to despise – that is your neighbor.  That is the person you must love.”

We Christians can be so picky about which parts of the Bible we believe and act on.  And the parts we don’t agree with we like to interpret the meaning out of them.  So we read straightforward commands of Jesus like ‘love your enemies and pray for those who persecute you… love your enemies and do good to those who hate you’, and we can say ‘Well, whatever it was Jesus meant when he said love your enemies, pray for them and do good to them he surely didn’t mean love your enemies, pray for them and do good to them.’  He meant something else.  It’s a mistranslation of the Greek, or something.  He probably went on to state a lot of exceptions, caveats and conditions to this command but the Gospel writers didn’t have the space to list them.  But when we truly understand the parable of the Good Samaritan in its original context then we can’t fail to be shocked and even offended by it.

Now this is so challenging that we can end up feeling completely discouraged and think that the life Jesus calls us to is not even worth attempting because we’re bound to fail.  And that is an option.  We can write off the command to love our enemies as being hopelessly unrealistic and not even try to fulfil it.  It’s an idea that is nice in theory and maybe we can make some small gestures in its direction, but it’s not for real life – not something you can actually set your mind to and achieve.  Or, we can change the way we define love.  The love Jesus calls us to have is not the kind that is rooted in warm feelings – it is impossible to have that kind of love for your enemy.  You can’t grit your teeth and try very hard to produce affection for someone who has seriously wronged you.  And if you want those feelings to come before you love your enemy then you’ll be waiting for eternity.  No, this love is a different kind of love.  So, foreign is it to our sense of right and wrong, that it seems completely unnatural, contrary to logic and even fairness.  Unnatural?  Well, maybe supernatural is a better word.  Because it can only be born by the seed of God dropping into your heart.  This love for an enemy begins with a decision.  It is a choice to see the humanity of the other, the belovedness of the other, the true image of God stamped on the soul of the other.  How is this possible?  I’m not sure I know.  But it drives me to God, to the cross, to confess my weakness and powerlessness, to declare my utter inability to live the way Christ calls, and then to depend, somehow, on his grace to do for me what I can’t do for myself.  No excuses, no defenses, and definitely no lawyers.