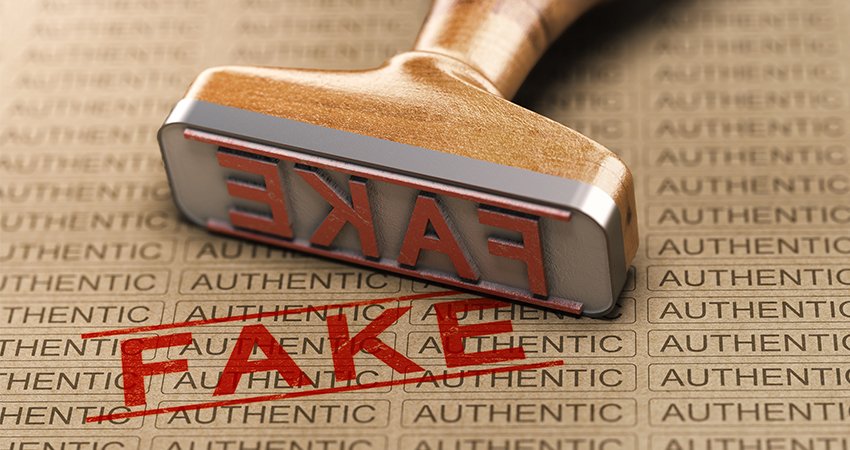 After church I want you to go around your home and check the Christmas presents you’ve bought, just to verify that you don’t have something counterfeit.  At Christmas you want the real thing, not a knock-off.  According to the International Chamber of Commerce, counterfeit goods make up 7% of world trade, maybe as much as $600 billion worth of goods.  Don’t have a knock-off Christmas.  Check those jeans, watches, DVDs, that wine, perfume, even food (did you know, for example, that a study by the University of North Carolina found that 77 percent of fish labeled as red snapper is actually tilapia).

I have a fake Canada Goose coat.  I bought it in Quebec.  Actually, it’s not strictly fake.  It’s perfectly legal because the makers are not trying to convince you that it is a Canada Goose.  The badge is on right sleeve and not the left, but the styling is the same and they have a picture of Canada and geese on the badge.  But it was about one-tenth of the cost and is really pretty toasty, so I’m happy.  But I’m not going to wear it at a convention of The Canada Goose Merchandize Supporters Club, because they will spot me as an imposter a mile away.  If you’re going to flaunt knocked off gear make sure you don’t do it around people who can tell the difference.  Don’t wear the fake Chanel Number 5 near the person who works at the perfume counter at Macy’s.  And before you buy that $10 Gucci handbag from that shifty looking guy in the pub check for the code on the reverse of the interior label.  That, apparently, is how you spot a genuine Gucci.

You don’t want a knock-off Christmas, and you don’t want a knock-off Jesus.  We want to make sure the Jesus we commit to is the real thing.  Mary got the real deal.  Here’s how she describes him in the Magnificat – the Canticle we read just now, and which is taken from Luke chapter 1.  “He has mercy on those who fear him in every generation.   He has shown the strength of his arm, he has scattered the proud in their conceit.  He has cast down the mighty from their thrones, and has lifted up the lowly.  He has filled the hungry with good things, and the rich he has sent away empty.  He has come to the help of his servant Israel, for he has remembered his promise of mercy.”  Listen to Mary’s most important words – having mercy, lifting the humble, filling the hungry, helping his servant, remembering his promise.

Mary’s song sets the stage for Jesus’ life.  Mary sings of God’s mercy, and Jesus embodies it; she sings of lifting the humble and Jesus does it; she shouts of filling the hungry and he completes it; she rejoices in God’s promise, and he fulfils it.

But this year there are quite a few knock-off Jesuses for sale.  There’s the harmless, inoffensive, powerless Jesus in a cattle trough.  This is the Jesus of the spoof NASCAR driver Ricky Bobby in Talladega Nights, where before meals he prays, “Dear 8 lb., 6 oz., newborn infant Jesus. Don’t even know a word yet. Just a little infant, so cuddly, but still omnipotent …. Thank you for all your power and your grace, dear baby God. Amen.”  This is a Jesus who can’t even change his socks let alone our lives; and who can’t even say “dada” let alone speak peace into our troubled souls.  You see, the baby of Bethlehem is easily controlled.  He doesn’t say a lot and certainly doesn’t challenge people in power; and he doesn’t ask questions of our attitudes and behavior.  So, yes this knock-off Jesus – the one who is always a baby and never grows up into the prophetic trouble-maker that we read about in the rest of the Gospel is very appealing.  And you’ll see him around a fair bit in the next 12 days. Then, in the New Year he’ll go away in the attic, and be forgotten about for eleven months.

There’s another knock-off Jesus you often find for sale.  He’s the exact opposite of the first one.  He’s a grown up.  And with his growth he has become a perfect specimen of a man’s man.  With his rippling muscles, he can bench press 300 pounds.  No obstacle is too big for him to overcome with his divine strength.  Feeding 5000 people with a kid’s brown bag lunch?  No problem.  Calming storms with a single word?  Awesome.  Raising the dead with but a breath?  You betcha.  It’s not that the genuine article didn’t do these things – he did.  It’s just that for the vendors of this knock-off Jesus, this is all he does – he blasts your problems out of the sky, torpedoes everything that can cause you to suffer, and bulldozes the things that get in the way of you being healthy, wealthy, and happy.  This knock-off Jesus can’t feel your pain, or empathize with you in your struggles and defeats.  He actually disapproves of you when you experience these things because he is for winners, and if you’re losing there’s something wrong with you.

Next up in the knock-off Jesus aisle at the store is a, serious, grim, holy looking man.  The word of judgment is never far from his lips. The disapproving shake of the head only ever a second away, the stern stare about to be unleashed at any moment.  This knock-off Jesus is watching you, and not in a good way.  His eyes pierce your soul and he sees the true state of your wretched heart.  There is no hiding from his laser vision.  Out of obligation he has forgiven you, but he hasn’t forgotten how you’ve messed up – the lies you have told, the impure thoughts you have entertained, the secret sins you’d hoped you had got away with.  This knock-off Jesus receives a perverse joy when people suffer, for they are getting what their sins deserve, whether they are the victims of disease, natural disasters, or human events.  This Jesus will constantly remind you of how he suffered for you, even though he did not deserve it and you were not worthy of his sacrifice.  The tools of his trade are guilt, fear, and shame.

The real Jesus is so much more than human beings can imagine or understand.  All those knock-offs are one-dimensional.  He’s a baby or a judge or a miracle-worker or a social worker.  But the genuine Jesus will not be reduced to a one-dimensional cut-out,  The real Jesus will not be owned by Liberals or Conservatives; he will not be defined by the Right or the Left; he will not be controlled by Protestants or Catholics or Charismatics or Mainliners or Evangelicals.  Jesus, the Genuine Jesus, is bigger than all that.  He shocks and offends all of us – left, right, and center.  He explodes our expectations of what God should do.  Jesus is bigger than our beliefs.  That can be unsettling for people who need to be right.  I used to be one of those.  Sometimes, when my insecurities get the better of me, I still am.  These folks have to be so right that they will only consume their news from media outlets that agree with them.  They will only belong to churches that preach what they like to hear.  They will leave those churches when the pastor says something they disagree with.  I’ve preached to congregations like that.  It’s like taking an exam every week.  There are people sitting in the pews not to hear God’s word, not to discover how much God loves them or how he wants them to live, but they are waiting.  Waiting for the thing they disagree with.  And when they hear it, as they definitely will, because no one’s theology is 100% identical to someone else’s, they will disapprove.  But not St Paul’s.  We have discovered a more liberating truth than the need to be right.  Because you believe in the Genuine Jesus, and not a knock-off, you don’t mind being wrong.  When God leads you into times of trial your faith is not crushed, your beliefs do not crumble.

In my early years as a Christian I followed the harsh, judgmental Jesus.  I don’t believe in him anymore.  The other day I took the cover off this Bible.  I have had this Bible for about 35 years, and I can’t remember the last time I took the cover off.  But as I did a piece of paper fell out of it.  It was a prayer that I wrote so many years ago I can’t even remember writing it, but I guess it was around the time when I was becoming disillusioned with the knock-off Jesus and was trying to break away from him.  This is my prayer, “Lord, help me to know deep down that I don’t have to be popular – you love me; I don’t have to be right – you respect me; I don’t have to succeed – you are proud of me.  You made me; I need feel no shame.  You redeemed me, I need feel no inadequacy, you live in me, I need feel no restlessness.”

Shirley Murray gets it.  She is a hymn writer, who in 2004 was working with Amnesty International, the organization devoted to promoting human rights.  And she penned the following hymn because as she read published hymnals she found very little about the God of Mary’s song that we’ve read this morning.

For everyone born, a place at the table,

for everyone born, clean water and bread,

a shelter, a space, a safe place for growing,

for everyone born, a star over head.

For woman and man, a place at the table,

with wisdom and grace, dividing the power,

for woman and man, a system that’s fair.

For young and for old, a place at the table,

a voice to be heard, a part in the song,

the hands of a child in hands that are wrinkled,

for young and for old, the right to belong.

For just and unjust, a place at the table.

abuser, abused, with need to forgive,

in anger, in hurt, a mind-set of mercy,

for just and unjust, a new way to live.

For everyone born, a place at the table,

to live without fear, and simply to be,

to work, to speak out, to witness and worship,

for everyone born, the right to be free.

And God will delight when we are creators

of justice and joy, compassion and peace;

yes, God will delight when we are creators

of justice, justice, and joy.

Mary’s soul magnified the Lord – her vision was made bigger – no more one-dimensional gods.  You don’t want a knock-off Jesus.  May we, this Christmas, meet and worship the real one.