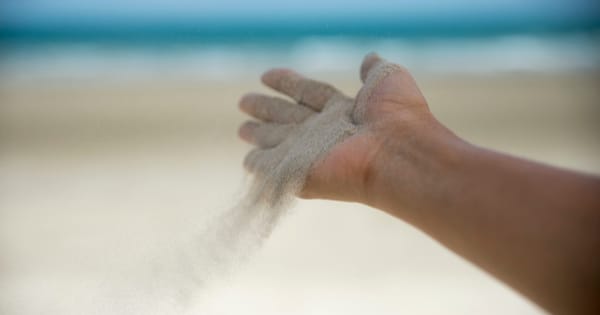 From Eden to Egypt 5: Accepting What We Cannot Change

From Eden to Egypt: 5

This morning I must tell you about Angus.  Angus the Monkey.  He is the mascot of the English professional soccer team, Hartlepool United; and Hartlepool, on the North-East coast, was the last town I lived in before I emigrated to this fair land.  Now, I completely understand if you’ve never heard of Hartlepool or their football team.  Even if you follow the Premier League, you will still not have heard of them because they’ve never been in the Premier League; in fact, they’ve never even been in the second tier of English professional football.  Now, Angus the Monkey serves as a testimony to the ability of the people of Hartlepool to laugh at themselves.

The legend of Angus dates from the Napoleonic Wars.  The story goes that a French warship ran aground at Hartlepool.  Deeply suspicious of what might be a French invasion, the good folk of the town rushed to the beach, where they found the only survivor, the ship’s monkey dressed in military uniform.  Now, most of the townsfolk had never met a French person.  Cartoons spewed out by the British propaganda machine often depicted the French as subhuman creatures with tails and claws, so the locals decided that the monkey must be a French spy.  So, they put the monkey on trial.  Not surprisingly the monkey was unable to answer any of the court’s questions and was found guilty.  (If you heard the Hartlepool accent you wouldn’t be able to answer their questions either.)  The townsfolk then dragged him into the square and hanged him.  And the people of Hartlepool are still affectionately called ‘monkey-hangers’ by the rest of the country; and many years later Angus the Monkey – get it?..  ‘Hang us the Monkey’ – was made the football team’s mascot.  It doesn’t end there, though.  In 2002 when I was a resident of that noble town, the guy who dresses in the monkey costume at game time ran for election to be the town’s mayor.  And won, defeating serious candidates from the main political parties.  His big election promise was that every child in Hartlepool would get a free banana if he were elected.  That was when I decided to emigrate.

The story of Angus is one of powerlessness.  The powerless French monkey, at the hands of frightened patriots; the powerless Hartlepudlians, victims of poor education and government propaganda; and the powerlessness of human beings to make it through life without providing fodder for humorous folklore.  And powerlessness is a strong theme we’ve been discovering in our summer sermon series – ‘From Eden to Egypt’.  Last week, we met a lad called Isaac.  You couldn’t get a more powerless character.  Trusting his father, while dad bound him with rope, placed him on altar and raised a sacrificial dagger high above his head.

And this morning, in Part Five, Isaac is still fairly powerless, the victim of cultural expectations that deny him something that we, in our culture consider a basic human right – the power to choose one’s spouse.  But if he’s powerless, how much more so is his future bride.  Rebekah is her name.  And in the elaborate story from Genesis she is not only powerless over whom to marry, she has the added powerlessness of being a woman in a patriarchal society.  She goes out to draw water at a well and is approached by a servant of Abraham, Isaac’s father.  And the servant asks her for a drink, which she provides, and then he asks her who she is, she tells him she is the daughter of Bethuel.  And with not so much as a proposal, the servant puts a ring in her nose and bracelets on her arms and claims her for Abraham’s son, Isaac, rather like a piece of livestock.  Her family ask her if this is what she wants, more out of politeness than as a serious question, and she dutifully says yes.  So she gets on her camel, with her maids, and goes to her new life to marry Isaac.

If you’re from a culture that does not feature arranged marriages, then you might struggle to make the mental leap to a society where that is the custom.  According to a 2012 study by Statistic Brain, 53 percent of marriages around the world are arranged. But the global divorce rate for arranged marriages is just 6 percent.  In so-called Love Marriages, the percentage is much much higher.  In fact, according to a 2013 IPSOS survey 74% of 18-35-year olds in India would prefer an arranged marriage over a love marriage.  If you are of European heritage you might find that hard to understand.  But let’s got off our cultural high horses.  I confess, I rejoice in that statistic.  And I think it points to a deep truth that in Western society we have lost sight of.  And it is this.  Who says choice is good?  Choice is something we can have too much of.  Does having 58 types of bread in the bakery section of the supermarket really make my life more fulfilled than if there only twenty?

When I set the topics for this sermon series, I identified Isaac as the character we’d focus on this morning.  But, as I lived with the passage last week, I shifted my attention from Isaac to Rebekah.  Because she is a picture of contentment in the midst of powerlessness.  She is our sister and our teacher.  We may wish to protest that her society should honor her human dignity and give her the right to make decisions for herself, and of course we’d be right to do so.  But her reality is that she has no choices, and so rather than trying to change things that cannot be changed, she accepts them.  She identifies God’s hand in her circumstances and sets out to live with faith, hope, and acceptance.

Human beings waste a lot of time and energy resisting the inevitable – ageing, sadness, loss, death.  The gift of accepting things you cannot change is one of the greatest and most elusive of God’s gifts.  When new have it we truly are free.  When we lack it we become small, bitter, joyless.  When I focus on what I lack and not what I have I become mean and envious.  Some time ago I read some research that showed that Christians die more quickly when they face terminal illness than do people of no faith.  It sounds odd, but the conclusion the researchers drew was that people with a living faith in God and an afterlife resist death less than people who believe death is the end of existence.  This helps them live more peacefully in the final days.  There’s a phrase you often read in obituaries or hear at funerals, “The deceased lost their battle with their illness.”  Well, for the Christian, there is no losing anything.  The terminally ill person of faith is not going to lose a thing – except a sick body and a failing mind.  Why resent and resist, when what you are going to gain is so much more than what you’ll lose.

Our patron Paul, knows all about this.  He tells us in Philippians, “I have learned to be content whatever the circumstances. I know what it is to be in need, and I know what it is to have plenty. I have learned the secret of being content in any and every situation, whether well fed or hungry, whether living in plenty or in want. I can do all this through him who gives me strength.”

Alexander Solzhenitsyn proved it for himself when, in prison he discovered that, whenever he tried to maintain some power over his own life by dealing with people to get food or clothing, he was at the mercy of the prison guards.  But when he accepted and even embraced his vulnerability, his jailers had no power over him. He says that he had actually become the powerful, they the powerless.

And thousands of years before him, our sister Rebekah showed this gracious acceptance of the way things really are, and not the way she wanted them to be, “And they called Rebekah, and said to her, “Will you go with this man?” She said, “I will.”  So they sent away their sister Rebekah and her nurse along with Abraham’s servant and his men.  And they blessed Rebekah and said to her, “May you, our sister, become thousands of myriads; may your offspring gain possession of the gates of their foes.”  You see, there are unspeakable riches when we give up control and go with God’s plan.

I started in Hartlepool.  Obscure, little Hartlepool, famous only for its folly.  Actually, that’s not quite true.  It is known for something else, even more somber than the hanging of a French monkey.  106 years ago, on December 16th, 1914, Hartlepool was the site of the first British casualty of the First World War.  27-year-old Private Theophilus Jones was manning a point on the Headland when he was picked off by a sniper on a ship.  To commemorate the 100th anniversary of the end of the ‘War to end all Wars’ on November 11th 2018, Private Jones’s portrait was etched into the sand on the beach of Hartlepool.  A skilled sand artist copied his likeness from a photo at low tide.  As the tide came relentlessly in, so the sea erased the image, but not the memory of Theophilus Jones.  Interesting name, that, Theophilus.  It means, ‘Friend of God’ in Greek.  I suspect he was, because why else would you be called that, unless you were.  In a way, Theophilus Jones is our Rebekah.  Unremarkable, unnoticed, growing up in obscurity.  And yet, the heir of The Promise.  She lives out her cultural obligations – she keeps her head down in deference to her parents and her heritage.  Yet, she is God’s chosen, playing out her part in an unseen and powerful drama – not a drama of evil like the First World War, but this Epic of Grace.  The Promise to Abraham – a people, a land, a legacy, a relationship with God, a covenant of love that would eventually be ratified on a cross and proven in an empty tomb.  When God has a plan it will happens.  Don’t push it away, deny its reality, resist its coming.  Rest and accept, and receive the Promise.