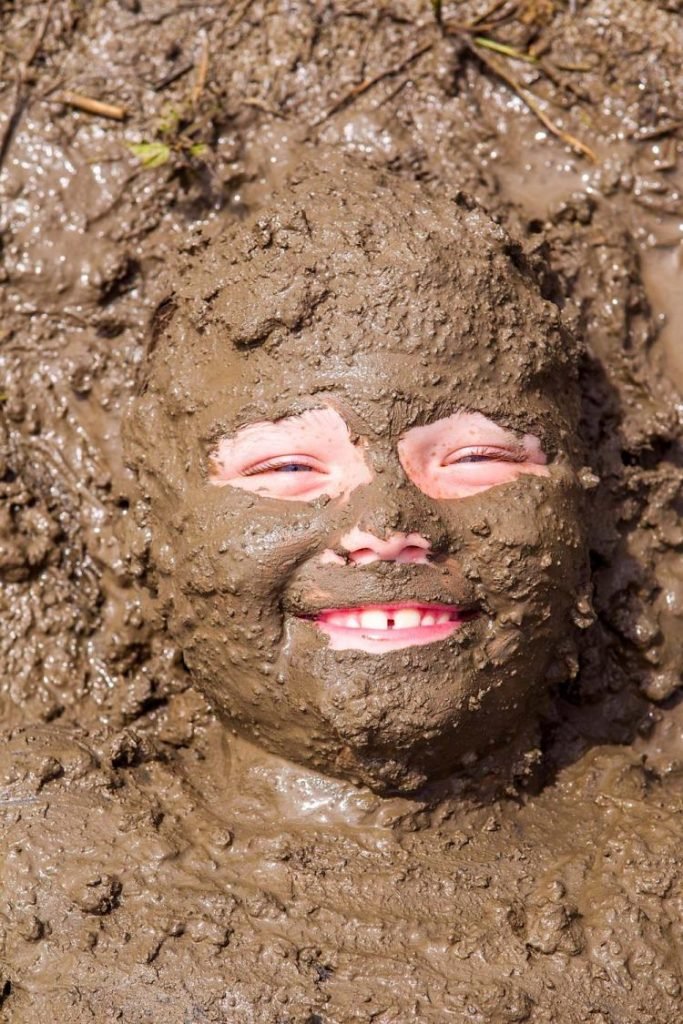 A while ago I was Southern California, in a chic and self-assured town built with mid-century glamor and style.  And while I was there I visited a street market that featured around fifty stalls selling all sorts of things I didn’t even know I needed.   Like glass pebbles that burn, without burning, making a cool-looking center-piece on your dinner table, and fashion accessories for your dog, like a $400 sweater.   But what really filled me with awe and wonder was a product that didn’t just take the biscuit of trivia, it stole the entire bakery.  Spray-on mud.  That’s fake mud that comes in an aerosol that you apply to your SUV to make it look like you take it off-road.  For $14.95 a can you will never again feel embarrassed by your spotless 4×4.  No longer will your self-righteous neighbors shake their heads disapprovingly because you only drive it down the shops.  Now you can make them think you take it up and down the Poconos every weekend.  What’s that saying about consumerism – buying things we don’t need, with money we don’t have, to impress people we don’t like?  At least in that swell SoCal town they could afford it.  (And, by the way, I’m sure it never crossed the minds of the inventors of spray-on mud that drivers could use their product to obscure their license plates when passing police speed traps.)  Baptizing your car in mud.

Have you seen pictures of the River Jordan?  It’s not a chlorine-enhanced swimming pool.  It’s not a font with clean, fresh water from a faucet.  It’s full of mud.  And not the kind you get from a can, either.  When we hear of Christ’s  Baptism in today’s Gospel reading it’s possible to form this sentimental image of Jesus being baptized in American Water’s finest.  But it wasn’t like that.  When Jesus emerged from the Jordan, he was probably dirty.  He had mud on his clothes and on his feet; gravel in his hair and his ears; sand between his toes.  If Jesus were to come to the exact same location today for his baptism, he’d need a tetanus shot.  Today that spot is little more than a bacteria-infested creek.  Christian pilgrims still plunge into the brown water despite the fact that it’s so infected with bacteria that the Israeli government has banned people from bathing.  (It is legal to enter from the Jordanian side, although the Jordanian government strongly advises against it.)

Environmentalist Gidon Bromberg of Friends of the Earth Middle East explains “If you drink the water, you’re likely to get very sick, and if you have a cut, you will probably get a rash.”

Baptizing in mud, washing in sewage, putting your clothes in the washer and instead of a Tide pod throwing in a shovel of dirt.  Maybe I’ve missed something, but if baptism is a sign of washing away your sins, the symbolism breaks down rather, if you end up dirtier than when you started.

In the 26 years I’ve been ordained I have never quoted a country song in a sermon, and I promise I will never do it again after today, but I now invite you to don your cowboy boots and let Trace Atkins take it away.

Eighteen-wheeler dropped me off at that city limits sign,

But there’s a man in me I need to drown.

Baptize me in that muddy water

Wash me clean in amazing grace

Baptize me in that muddy water.

What do Trace, John the Baptist, and Jesus know that I don’t?

Straight after his baptism, Jesus goes on retreat into the desert to pray, to fast, to endure the angry flame of temptation.  Forty days later he returns to society and the bewildering mess of human need – sickness, poverty, alienation, despair.  He begins to make his way to Jerusalem and the muck of betrayal, the trash of suffering, the grime of an unjust death.  But he goes there with a garbage sack.  And he loads it to the top with the worst of mankind’s mud – the hate, the violence, the lies, and he clings to it as his wrists are kissed by nails.  To be real you have to go where the muck is.  To follow Jesus you need to get in the mud.

When you look back at your baptism, what do you see?  It was a vital moment on a crucial day.  It made you who you are now – God’s chosen, God’s heir, God’s beloved adopted child.  But there was more to it than just passing from gloom to light, from death to life.  A call was placed on your soul.  A plan was hatched in the mind of God for who you would become, for what you would be, for how you would become a coworker with God in the renewal and salvation of the world.  You were set apart and given a noble and holy task, one that no one else can perform.  God is proud of you.  Those words of God proclaimed over Jesus at his baptism – This is my Son, the Beloved, with whom I am well pleased – God says those words over you – you are my daughter, my son, my beloved, with whom I am well pleased.  So let’s be clear what this job is that God called you to when you were baptized.  It was the call to get down and dirty.  To be deeply invested in the murky lives of men and women.  To be intimately involved with God in influencing the culture of your workplace, your family, your social network; changing lives, transforming society, cleaning the dirt.

I wish I could tell you that at your baptism God called you to life of comfort.  I wish that Alessandra, Noah, and Arthur are this morning being gifted lives that will be free of conflict and struggle.  I would love to reassure you that we can live in glorious isolation from broken dreams, broken hearts, and broken families – both ours and of those we love.  But I can’t.  Our task as God’s beloved children is get stuck in and get our hands dirty.

Take Aengus for example.  Aengus was a Fifth Century king.  King Aengus of Munster in Ireland.  At that time St Patrick was on his mission to take the Good News of Christ to the Irish people, and this day in 455 he visited Aengus’s kingdom.  News of Patrick had reached the King’s ears and warmed his heart.  He wanted to know more and to be baptized.  Patrick and the king stood before a pool beside the king’s castle.  Patrick gripped his shepherd’s crozier which was embedded with jade and emeralds.

“Do you believe in God the Father Almighty?” boomed Patrick.

“Christ Jesu was born of a virgin called Mary. He was murdered by Pontius Pilate. He died, was buried, and on the third day rose again. Then he ascended into heaven where he sits at the right hand of God the Father. Do you believe this?”

“And do you believe Christ Jesu is the Son of God?”

“I believe,” responded the king.

And in his excitement Patrick lifted his crozier and thrust it down into the ground next to him, sending its sharp end sinking into the moist soil.  Except he didn’t.  He actually missed the ground and thrust the spike through the center of Aengus’s foot.

The king stifled a cry of pain. Patrick kept on praying and when he finished, he passed the crozier to an acolyte, and stepped into the water up to his chest. Only then did he notice the king’s wound.  Patrick was horrified at what he’d done.  For some moments, he stared at the damage.  He lifted his eyes to Aengus and beckoned him to enter the water. The king limped into the pool and Patrick baptized him.  At the end of the ritual Patrick fell to his knees and begged the king’s forgiveness; and he asked why Aengus hadn’t said anything at the time. “I thought,” he replied, “that it was part of the ceremony.”  And maybe it kind-of is.

Maybe this initiation does pierce us and wound us because it sets us apart and marks us for life.  The Roman Catholic writer Richard Rohr has studied various initiation ceremonies around the world, especially those involving young men in ancient cultures.  And he says that the point of those ceremonies is to force the young man to experience five difficult truths:

You are not that important.

It is not about you.

You are not in control.

You are going to die.

Here is one of those moments when I realize just how poor modern Western culture is at helping young people become adults.  Our secular initiation ceremonies are usually only about celebration, parties, and consumption.  And, of course, initiation into the Christian Church – baptism – is most definitely an occasion for a party and a celebration.  But on this Feast of the Baptism of Christ let us remember our baptisms are a mark of mud, a call to get involved in the messiness of life, and a reminder of our deaths.