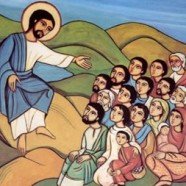 Blessed are the People You Don’t Want to be Like

I remember Nicholas’s sermon very well.  Because he preached it every Sunday.  The same one.  Week after week, month after month, for the full fifteen years he was vicar of that South London parish.  But that didn’t matter.  He was never one for scintillating stories, memorable metaphors, vibrant verbs, quality quotes, alluring alliteration or any of those devices that we preachers who are lesser people than Nicholas must employ if we’re to make people listen to us.  Nicholas didn’t need fancy rhetoric because his message oozed out of him in a way that convinced you you were in the presence of holiness.  You almost wanted to take your shoes off.  When you looked into the eyes of Nicholas you saw Jesus waving back.  He made you feel that you were the most important person in the world.

He didn’t need more than one sermon because he could read you the phone book and still God would reach down into your chest and give your heart a great big hug.  He had been to seminary, because this was the Church of England, and we don’t ordain just anyone, but you wouldn’t know it.  In seminary they fill your head with book knowledge and test you in academic disciplines.  But you knew that Nicholas didn’t get his accreditation from an institution, but from the Holy Spirit.  What he had could not be learned in a classroom, and what he shared was not gleaned from a book.

You could say Nicholas was born to be a shining star in the Established Church of the nation.  As a child he had attended one of the most aristocratic schools in England and then had a short but stellar career as a commissioned officer in the British Army, but Nicholas never thought that was worth mentioning.  He inherited the title of Baronet from his father – which made him minor nobility and allowed him to call himself ‘Sir’ Nicholas Rivet-Carnac, which he never ever did.  He also inherited some money, but it wasn’t obvious because he’d given it all away.  As vicar of the parish he was supposed to live in the five-bedroom vicarage, but he turned it into a community center and rented a one-bedroom apartment instead.

What he did think was worth mentioning was Jesus.  And he spoke about him all the time.  Not in a nauseating or false fashion, but in a way that made you know that the man he was talking about was a dear friend.  And so, the substance of his one and only sermon was how much God loved you, shown supremely in the cross of Christ.  And that was it.  And It was spellbinding.  You could not stop listening even if for some foolish reason you might want to.  Nicholas was the parish priest of the last church where I was a member in the 1980s, the parish which sent me off to be ordained.  I wouldn’t be standing here if it were not for him.

So, in the spirit of Nicholas I’m going to preach my sermon from two weeks ago and see if any of you notice.  No, I’m not.  It’s just that he’s been on my mind this week.  Because in today’s Gospel lesson Jesus steps down from a mountain where he had been praying, walks purposefully onto a level piece of ground, heals unnumbered people in need of a miracle, then sets up an easel, takes out his watercolors and a brush and paints a portrait of the people Nicholas loved – those to whom he had given his life in that deprived, urban parish.  “Blessed are you who are poor, for yours is the kingdom of God.  Blessed are you who are hungry now, for you will be filled.  Blessed are you who weep now, for you will laugh.  Blessed are you when people hate you, and when they exclude you, revile you, and defame you on account of the Son of Man. Rejoice in that day and leap for joy, for surely your reward is great in heaven.”

Blessed are the unfortunate, the disadvantaged, the despised, the victims, the people we don’t want to be like; blessed are the people who are the very opposite of  blessed.  Because poverty is not a blessing, is it?  Being blessed is having all your needs met.  Hunger is not a blessing, being full is a blessing.  And persecution?  Tell the Christians locked up for their faith that they are blessed.  Tears do not grow the seeds of blessing, they are the salt water from which nothing useful grows.  Aren’t they?

We’re used to Jesus and his upside-down world, aren’t we?  Where the last shall be first and first last, where the mighty will be humbled and the lowly exalted, where the hungry are fed and the rich sent empty away, where two copper coins are worth a million dollars, where the more you give the more you have, and now – get this – where the people I don’t want to be like are the very people I should aspire to be like.  This one hurts.  When Jesus stood on level ground and described the men and women who are blessed by God, he turned the whole of human wisdom upside down.  Or was that the right way up?

God used to speak on mountains.  Moses went up a mountain to receive the Ten Commandments.  Abraham went up a mountain to hear God’s call.  Jesus and some disciples went up a mountain to have an intense encounter with God that made his clothes turn shiny white (we’ll read about that In two weeks).  His most famous sermon was delivered on a Mount.  But today, Jesus comes down the mountain to speak the Word.  He stands on level ground and levels with us.  He comes to our place –to the place of the sick and marginalized whom he healed that day, and gives it to us straight.  This must be urgent, this must be vital, God is so bursting for us to know this that he suspends normal operating procedure and comes to us.  Like the Father running to meet his prodigal son when he sees him in the distance coming home, so God runs to us now, with this vital invitation.  And he does so with the same motive – it is love that brings Jesus down the mountain, it is love that breaks his heart for the sick when he gets there, and it is love that prompts him to speak these words of challenge.  Now I’m beginning sounding like Nicholas.

I get it, it may not sound like love.  For comfortable Western Christians this may sound like judgment.  Woe to the rich, woe to the full, woe to the happy, woe to the popular.  We can read these woes as the tirade of an angry God.  A deity who sees the suffering caused by great inequality and decides to reverse the roles so that the victims enjoy pleasant circumstances for a change and those who have experienced happy lives feel some pain.  But what if the good news is better than a crude reversal of roles?  What if the good news is – instead of judgment, grace; instead of anger, embrace; instead of dire warning, open-hearted invitation.

Because here’s the truth that Jesus saw so clearly and that we all know from our experience: The greatest riches in life, the most precious treasures in all this noble human experience cannot be bought with money.  The things we live for, the things we are willing to die for, aren’t measured in dollar signs.  ‘Some people are so poor all they have is money.’  I wish I’d said that, but it was Bob Marley.

This is not a word of despair to the well-resourced.  This is not a damning judgment against wealthy people.  Later in Luke’s gospel Jesus meets a wealthy but corrupt man named Zacchaeus.  And Zacchaeus’s life is transformed by this encounter, and as a sign of the new life he is going to lead, he gives away vast sums of his wealth as restitution and out of compassion for the poor.  So, it’s not wealth in itself that kills the spiritual life, but the things that often come with it – wealth can insulate people from the suffering of others, it can lead some to take their eyes off God and live as if they were self-sufficient, it can even make people worship themselves, as if their material possessions were a badge of their goodness or morality or favor in the eyes of God.

Jesus loves rich people, popular people, powerful people.  It’s just that he knows they are given responsibilities, temptations, pressures that other people do not face.  The wealthy man, the popular woman, the powerful person can do incredible good, but they can also do terrible harm – the kind of harm under-resourced people can’t inflict.  Above all, Jesus implies, they can use their influence and resources to advance the cause of God’s kingdom or obstruct it.

Elsewhere he says, “From everyone who has been given much, much will be demanded.”  There is crushing inequality in the world.  Billions of people are under-resourced in money, status, and power.  But it is not just the under-resourced who suffer from the inequality.  Those who are well-resourced also dwell in a dangerously vulnerable place because of them much is expected.  People who are well-resourced can literally change the world.  They have the power to transform lives.  What an incredible gift from God.  To be God’s instruments in the renewing of the world, in saving lives, in influencing society’s ideas and opinions.  And so, yes – woe to the wealthy, the full, the happy, and the popular because they can change people’s lives for good or for ill – and that is a heavy calling.

When you love someone you level with them.  Jesus stands on level ground and levels with us.  You see, this is a love story.  Nicholas is listening from heaven and approves.  He got it, and so must we.  If we want to live life that is truly life, we must use our resources – our money, our popularity, our minds, possessions, talents, and time as tools for God’s kingdom.  When we hold onto them lightly, use them for the blessing of others and the cause of God’s kingdom, we will enjoy life in a new dimension.  We will be truly blessed.