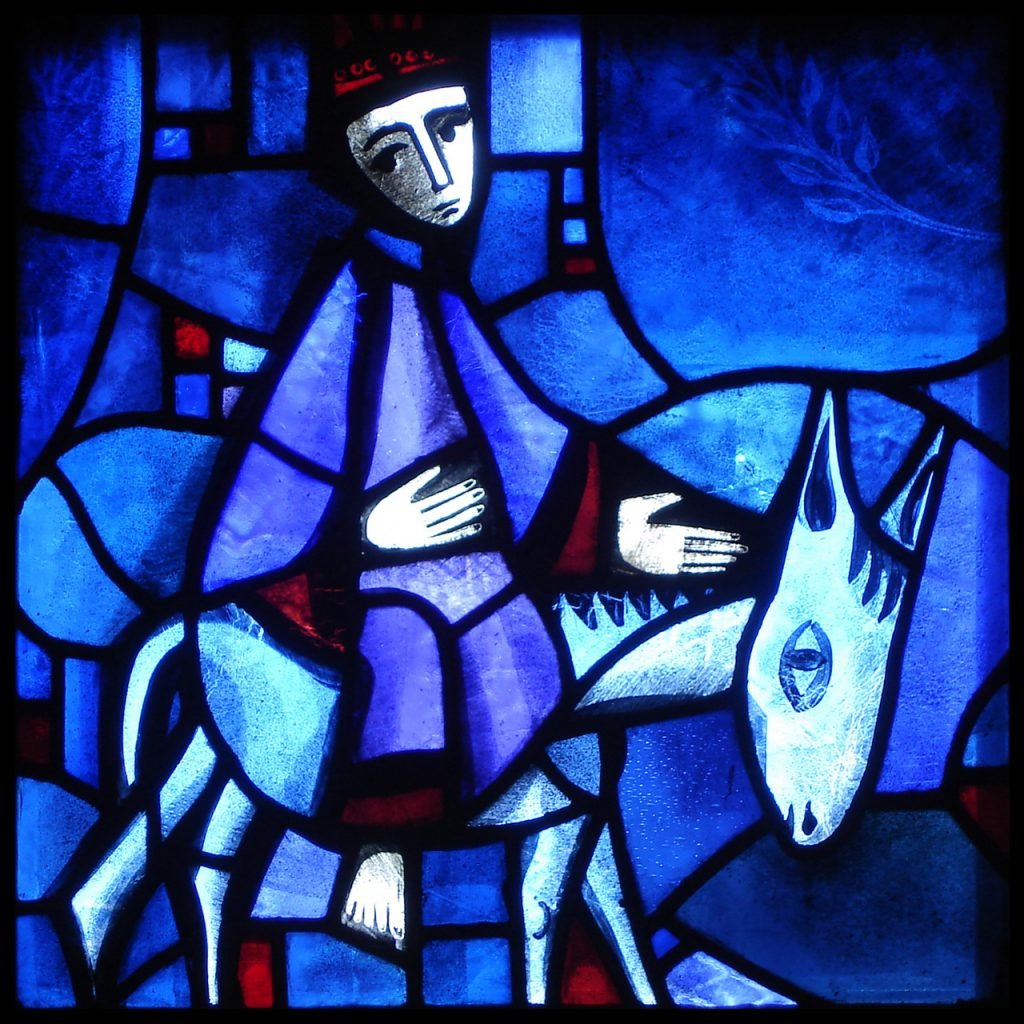 That day had started just as any other.  Ned was led out of his stable and was tied up outside an ordinary house in his small village.  There was nothing remarkable about the visit from those two men.  Sure, Ned had never seen them before, but he was confident that they knew what they were doing, and they had his owner’s permission to take Ned away for whatever task they had in mind.  But what happened next was a little unexpected.  They placed cloaks on him, and then the strangest feeling.  A man climbed onto Ned’s back. This had never happened before, and Ned didn’t know how to react.  He was afraid of what might happen, he didn’t like this extra weight, and he was anxious that his young legs might give way.  But there was something about this man that Ned found reassuring.  There was a gentleness about this rider, not like the impatience he had seen in the men and women who had ridden the members of his family.  This man now sitting on Ned’s back was different from the others.  He seemed to understand Ned, almost as if he had, in some way Ned could not understand, been a part of creating Ned.  He seemed to know how to handle him.  He even made him feel rather special.

But that was just the beginning of Ned’s big day out.  He did not know where he was going or who this man was on his back, but Ned noticed a crowd gathering.  There were the man’s friends who had been with him when he set out, but now as they made their way to the city, other people stopped what they were doing and looked up.  Some joined in this happy band of pilgrims until it became a procession, with Ned’s rider at the center of it.  The sight of these friends laughing and singing as they walked along the road intrigued passers-by and beckoned them to join in.  But maybe something deeper was going on, something that Ned’s donkey brain could not grasp.  Indeed, something that the human minds joining the procession could not comprehend either.  For here was a victory parade, a coronation, and a funeral cortege all rolled into one. All Ned knew was that his rider was special and that made him – this young colt – special too.  He had been chosen.  And his kind would be forever ennobled by the rider who sat on his back.

Donkeys have a bad reputation.  They’re known for being stupid, stubborn and a bit of joke.  Donkeys are not graceful or beautiful, they don’t fill you with awe, you are not inspired when you see one, unless it is to tell them to cheer up, put on a smile, and stop being sauch an Eeyore.  Why the long face?  (Because I’m a donkey.)  But according to the people who know these things, this is unfair and wrong.  Donkeys are, says archaeologist Fiona Marshall, “extremely intelligent.  Whole trade routes were built on donkeys, and the wealth of ancient Egypt depended on them.”   When it comes to steadiness, stamina, and heroic resistance to heat, cold and thirst, donkeys win the gold medal in the animal Olympics.

So, instead of stupid, stubborn, and a joke, let’s try intelligent, cooperative and noble.

Today, we honor the ministry of Ned.  It’s the feast of St Ned.  St Ned the Christ bearer.  How’s that for a noble name?  But I want to blow this day wide open.  Let’s make it the day for all Christ bearers.  And, yes, I’m looking at you.  You and I are bearers of Jesus.  We take him with us wherever we go, and just like Ned we receive nobility and purpose because we carry Christ.  And like Ned we carry him with intelligence, co-operation, and nobility.

Intelligence because he uses our minds as well as our hearts and hands.  Not that Christians know all the answers I’m not even sure of the questions, but we share a reasonable faith, in which the world’s finest intellects find a peaceful home.  Francis Collins, director of the National Institutes of Health, we’ve seen him a lot on TV in the last year, is a devout Christian who says, “I think of science as a gift from the Creator. The curiosity we have been instilled with to understand how the universe works can inspire even greater awe of the Creator. This gift could hardly be a threat to God, the author of it all. Celebrate what science can teach us. Think of science as a form of worship.”

We carry Christ with intelligence, and with a co-operative spirit.  In the right hands, donkeys are not stubborn, and all Christ-bearers need to be flexible and humble.  Flexibility is one of the great virtues we have been forced to grow in the last year.  A nineteenth century missionary named Andrew Murray wrote, “The humble person feels no jealousy or envy.  They can praise God when others are preferred before them.  They can bear to hear others praised while they are forgotten because they have received the spirit of Jesus, who pleased not himself, and who sought not his own honor.  Humility is perfect quietness of heart. It is for me to have no trouble; never to be fretted or vexed or irritated or sore or disappointed. It is to expect nothing, to wonder at nothing that is done to me, to feel nothing done against me. It is to be at rest when nobody praises me and when I am blamed or despised. It is to have a blessed home in the Lord where I can go in and shut the door and kneel to my Father in secret and be at peace as in a deep sea of calmness when all around is trouble.”

Did you know that there was another procession that day when Ned plodded into Jerusalem?  It happened across the city, at another gate.  It happened every Passover.   The Roman governor of Judea, Pilate, rode from his home in Caesarea to Jerusalem to make a grand show of power just in case the locals became restless and let their resentment of Rome bubble over into violence.  Passover was the most volatile of time of the year, and rather like lining all the streets with riot police, Pilate rode into town to instill fear in the people.  He came in power and pride to intimidate and threaten.  And of course, he rode a horse.  Jesus procession, on board Ned, proclaimed a different power and a different kingdom.  Justice, peace, an end to exploitation and domination,

The Feast of St Ned is a day rich in irony and pregnant with purpose.  For us, the irony is obvious.  The crowds call Jesus “The Lord” and “The King”.  And so, they should, because that is what he is.  And yet, we know they are calling those names out of misunderstanding.  They called Jesus ‘Lord’ because they thought he would lead a military conquest of Jerusalem and rid it of Roman control.  Names have power.  What we call someone shapes their future even in a small way.  The name Jorge Bergoglio doesn’t tell us much about the owner of that name, but the title Pope Francis tells us all we need to know about that man’s vision and character.  Who knows how many golf tournaments Eldrick Woods would have won if he had not been nicknamed ‘Tiger’ from early childhood?  If you’d ever seen Edison Arantes do Nascimento play soccer, you’ll understand why as a kid he was nicknamed ‘Miracle’ which in Hebrew is ‘Pele’.  The Palm Sunday crowds were right to call Jesus King and Lord.  But he is other things too – the Lamb of God who takes away the sins of the world.  The suffering servant, a Passover sacrifice, reconciling the world to God in the giving of himself.

By the end of that week, after Jesus had gone postal in the Temple and overturned the tables of moneychangers, had talked about destroying the Temple and rebuilding it in three days, crossed swords with the religious leaders, told the people to pay their taxes to the Romans, and made it abundantly clear that his Kingdom was not of this world, many of those Sunday revelers had lost faith in him.  Most washed their hands of his mission.  They wanted Jesus to fit in with their theology.  They expected God to want the things they wanted.  They demanded that Christ champion their causes.  Men and women still do the same thing today.  I think I know what is right and wrong, and I expect God to back me up.  God is on my side and he will make sure that I win the argument, that I have the last word, that my puny understanding of how the world should be matches God’s vision, that what I think should happen is part of God’s perfect plan.  But, friends, we can’t expect the Christ of Palm Sunday – the King who rides a donkey – to make sure that we get our own way.  The Jesus of Holy Week had an agenda, but it was not power and self-promotion.

A lowly animal is the perfect method of transport for Jesus’ entry into God’s earthly city.  In the same way, wherever you go this Holy Week may you be aware that you carry Christ.  You take him to the market, to the office, to the park.  If you are not going out just yet because of the pandemic, you are taking him online – to your social media pages, you’re taking him on your phone when you talk to friends or family or businesspeople.  So, may we bear Christ in the same way as Ned- with thoughtfulness, mindfulness, with co-operation and friendship, and with the nobility that comes through lowliness.