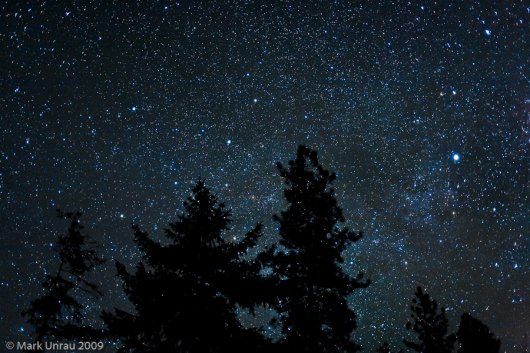 Count the stars, if you can.

You know the problem with stars?  Many of them may not actually be there.  It’s a crazy thought, isn’t it?  But it’s quite possible that some of those twinkling balls of fiery gas could have burned themselves out millions of years ago, and we don’t even know it yet.  It looks like they truly exist, but the light that will reach your eyes tonight when you gaze into the sky – that light left some of those stars millions of years ago.  There’s one star in particular.  It is romantically named MACS0647-JD, which is what you get when you ask a scientist to name something, rather than an English major.  MACS0647-JD is 13.3 billion light-years away, so in theory it could have died 13 billion years ago and it will be another 300 million years before we know it.  But there it is, shining away, maybe lying to us, possibly claiming to be something when it isn’t.

You know the problem with stars?  We wish upon them, we fall in love under them, they stir us to dream, we lie beneath their comforting blanket, plumbing the depth of our imaginations.  Yet all they are is balls of hydrogen.  Hardly the stuff of poetry.  Sailors tell the time by them; explorers steer a course by them.  Stars seduce mariners, reminding them of their loved ones at home, cheering them with thoughts of safe harbor, comforting them in the nostalgic night.  These astral friends are reliable, constant, dependable.  Even if they may not actually be there.

You know the problem with stars?  You can’t count them.  The people who know about these things reckon that there are about 10 billion visible galaxies, and the number of stars in each galaxy is probably about 100 billion.  That means there are 1 billion trillion stars in the universe – that is 1 with 21 zeroes after it.  And that is just the ones human beings can see.

So when God says to Abram in today’s Old Testament lesson, “Count the stars, if you can”, it is probably with a certain satisfaction that this task is beyond the mind of a pre-modern man with no telescope, and a counting system that probably didn’t go beyond a few thousand.  And that is the point.  God isn’t making fun of Abram; he is doing the opposite.  He is using stars – bodies that Abram knew better than we 21st century suburb-dwellers know – to reveal to Abram the magnificence of God’s love for him and for all humankind.  These stars that Abram first became familiar with in early childhood are signs, says God – signs of a promise.  A promise so vast, so beautiful, so beyond the mind of Abram that the best way God could tell him about it was to show him the night sky and say, “Count the stars, if you can.  Because just as you can’t even begin to number them, so you will not be able to count the descendants you will have.  Oh, and I’m giving you land too – a spacious and fertile land where your countless offspring will dwell securely.”

Offspring?  Land?  Is this some kind of sick joke?  Look at me, said Abram, and look at my wife Sarai.  We’re too old.  We cannot have children and we will not possess a land.  His actual words, according to Genesis 15 were, “Sovereign Lord, how can I know that I will gain possession of it?”  But that was the gist.  Abram, the man who is known as the father of our Faith, the Man of Faith, questions God.  He hears God’s promise – and it is too much.  It is too gracious, too huge, too overwhelming with kindness and miracle.  And he questions.

When we hear the promise of God, it is OK to question.  When we receive his words of welcome, his assurance of forgiveness, his pledge of acceptance, his guarantee of grace, it is only natural to question God.  In fact, it is not just acceptable, I think God kind of expects it.  Because just as Abram could not get his head around the stars in the sky, so we frail, limited human beings cannot comprehend the magnitude and brilliance of God’s grace.  We hear about God’s acceptance of people who have committed unspeakable acts of wickedness and we gasp, “How can this be?”  We hear a priest pronouncing absolution every Sunday and we shake our heads, “I don’t get it, Lord.  You forgive Me?  Even when I forget you, neglect you, disrespect you, even though I constantly fall down, act out, and mess up?”

So, hear the good news.  Abram’s story doesn’t end with a question, it concludes with acceptance.  Despite his doubts, he opens his hands and opens his heart and receives the promise – the gift of a child and the gift of land.  With a questioning “yes” Abram welcomes God’s call and takes his place in the unfolding of God’s plans for the salvation of the world.  His healthy, natural questioning did not disqualify him from the promise.  Maybe that is a definition of faith – Faith is where questions and trust live together.  Faith is the place where you wonder just how this can be true, but you believe it enough to act as if it were; where you may suspect that you are not good enough to receive anything from God, but you’re holding out our hands and receiving the gift anyway.

Count the stars, if you can.  Take out your telescope, dust off your abacus.  Receive my promise in all its brilliance.  My pledge to you is a life like no other.  A life of struggle, sure, of uncertainty, certainly, of seeing through a glass darkly, absolutely.  But a life in Christ and with God.  Companionship in the struggle, comfort in the questions, peace in the black hole.  Count the stars, if you can.

Like Abram we are called to a life of blessing and fruitfulness.  Count the stars, if you can.

To the schoolteacher, the fruit of young lives molded, sculpted, transformed into people who will make the world a better place.  Count the stars, if you can.

To the checkout operator, the fruit of customers who see your peace and spot the presence of Christ in your life.  Count the stars, if you can.

To the retired person whose service to God and the world is now prayer, count the stars, if you can.

To the stay-at-home parent investing hour after hour of time and energy into raising a child, who will grow to shape neighborhoods and communities, count the stars, if you can.

To the commuter wondering if the daily grind is worth it, count the stars if you can.

To you and me and all of the members of St Paul’s who sometimes wonder why we got out of bed this morning, and whether there is any point to our existence, count the stars, if you can.  These are the twinkling reminders of God’s presence in your life, the daily signs of blessing, the refreshing promise of glory.

We will – each of us – bear fruit in our lives.  How do I know?  Because that is why God has called you.  He has not called you to uselessness.  At the font, God placed upon you his call and within you his Spirit.  You have a task – given by God – unique to you and magnificent in its scope.  We will bear fruit.  Count the stars, because you can.

I remember my call to count stars.  I was 20 and was at a Christian conference.  There were thousands of us.  And that night we were in a massive marquee.  We were there to worship and to listen to a preacher.  It was cold.  It was April in the north of England.  We sat in the over-sized tent in our thick winter coats, wondering why we were not back in our warm chalets across the campus.  “This has better be worth it”, someone said.  I just mentioned there was a preacher.  I’m sure there was.  There must have been, because there always was – every evening of the conference.  But, to tell you the truth, he was irrelevant that night.  I can’t tell you the speaker’s name, I can’t recall a single thing he said, I don’t remember a anything about him.  All I recollect is that I sat spellbound.  Stargazing.  Of the five thousand people in that marquee, I was aware of only two – God and me.  I don’t recall what God said.  In fact, now I think about it, he didn’t say anything.  God sidled up and sat next to me, nudged me in the ribs, and gave me a shot of adrenaline that caused me to listen in a way that left me no choice.  God reached into my chest and poked the center of my being.  I felt alive in a way I had never experienced before.  I felt as small as an insect scurrying to find warmth on that dank English night, but also large enough to have a role in God’s plans.  Someone once asked Mother Theresa what she said when she prayed.  She replied, “Oh mostly I just listen.”  The interviewer then asked, “Well, what does God say?”, and she replied, “Oh mostly he just listens.”  And for those few minutes I was alone, with God, in a wordless conversation.  I felt special but also humble, hand-picked but ordinary, called yet sent.  By the time I left that big tent I knew I would one day be ordained, even though at that time in my life I had never preached a single sermon.  And it was OK.  I don’t recall struggling with God.  I don’t remember putting up a protest.  I’m glad God did not speak in words that night.  I’m grateful for his silence.  If he had uttered human language I would not have coped.  That night if God had whispered the words ‘Church of England’, I would probably have questioned like Abram.  If he had uttered, ‘New Jersey’ I’d have accused him of losing his mind.

How about you?  Because you too are called – maybe not to be ordained (but don’t rule it out) but to bear fruit, nonetheless.  The stars are shining today – the promises of God for you – the fruit of your labor.  So, go outside, and count the stars.  If you can.