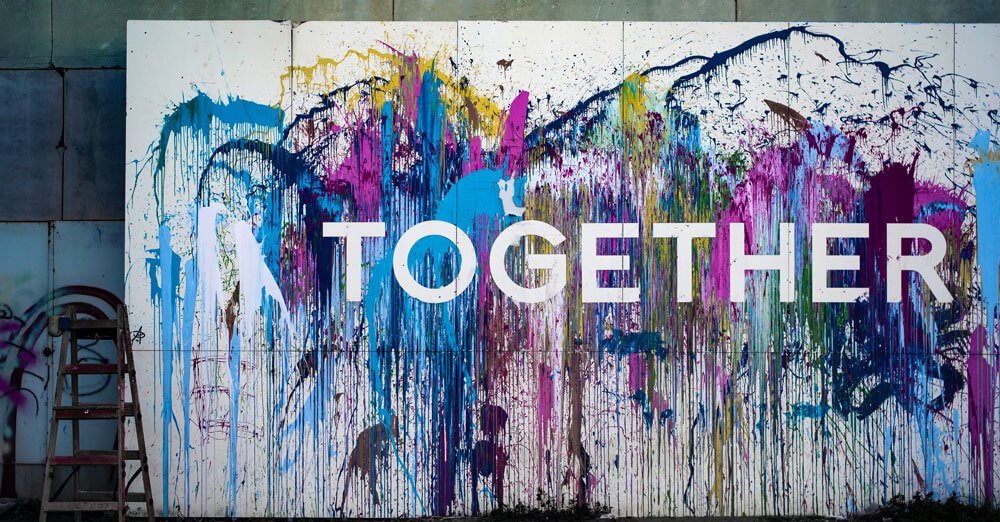 A man was shipwrecked and alone on a desert island on which no other human being had ever set foot. After many years of isolation, he at last saw a ship on the horizon which came closer and closer and, joy of joys, eventually anchored a few yards from shore. The crew of the ship waded onto the beach and the castaway ran out to embrace them. He then asked the captain and crew if they’d like him to show them around the island.  “Of course,” replied the captain.  And so, he pointed to a small log cabin in the middle of the beach, and proudly said, “This is my house. I built it with my own two hands.”  Then he showed them a second building nearby. “This is my workshop where I make things out of the rubbish washed ashore.”  Then he pointed to a statelier looking building a few yards down the beach.  “This”, he solemnly declared, “is the church I go to.”  And with that he told the captain that he’d now like to go aboard and begin his journey back to civilization.  But one of the crew noticed another wooden building that the castaway hadn’t mentioned, and he asked, “what’s that over there?” And the man replied, “Oh, that’s the Church I used to go to.”

That joke is funny, at least I think it’s funny, because we recognize the truth that we Christians have an unnerving ability to leave our churches and go somewhere else.  And the joke is also not funny, for the same reason – we Christians have an unnerving ability to leave our churches and go somewhere else.  According to Wikipedia there are 38,000 denominations in the world.  There are over 200 denominations in the United States.  That number sounds encouragingly small, until I tell you that it doesn’t include the 35,000 congregations that are independent of a denomination and are going it alone.  Tragically, not all the churches in America were started as a result of missionary enthusiasm, although some certainly were.  Most came about as a result of conflict.  Some of these were theological – “we can’t agree with your view on the sacraments, so we are leaving to start our own church”.  Some of them were over the decisions of leaders, “We think it is unacceptable that you should introduce chocolate cookies at coffee hour instead of the simple baked goods that are our tradition; so we’re off to start a new church that honors the Christian virtue of self-denial at coffee hour.”  And some of these conflicts were about the personalities or the frailties of the human beings that inhabit churches.  And as Episcopalians we must approach the subject of church unity with humility and penitence.  Don’t forget our church was started by a guy who wanted to divorce his wife and marry his mistress, against the teachings of the church he was a member of. (If that memory doesn’t sting, it probably should.)

And the tragedy of this is that of all the institutions in the world the Church should be the one least prone to splitting. The thought of leaving a congregation over a conflict should send chills down our spines, it should be totally against our deepest instincts as followers of Jesus.  The instinct to love each other, even when we disagree, should be the strongest urge we have. And yet, we live in a consumer society where the shopper is sovereign and where if we don’t like the supermarket we have been using or the product we’ve been buying or the organization we’ve been a member of then we have a duty to the free market, to go elsewhere where our self-interest will be satisfied. That might be all well and good for breakfast cereal, but if we are going to take seriously the teaching of Jesus and Paul, it is just not acceptable when it comes to Church.

So, I conjured up this vision of a triangle.  With Jesus at the top.  And people at the bottom corners – separated from each other by one side of the triangle.  But when the people down in the corners make their way up towards Christ at the top of the triangle, then something wonderful happens.  They come closer together.  When we focus on Christ and his death and resurrection, we become one.  When we get the perspective that he is the reason we’re doing this, that he is the beginning and the end, the cause and creator, the meaning and the story behind human history, the word behind the cosmos; when we focus on the eternal truth of one Lord, one faith, one baptism, then everything else fades away like the mist on a fresh October morning.  That triangle says when we are drawn to Christ, we will automatically, without us even having it as a goal, draw closer to each other.  Here’s the grand good news – this coming Holy Week and Good Friday, when we survey the wondrous cross, and not just survey it, which carries the meaning of a broad overview from a distance, no, when we study it, examine it, embrace it, feel it, we will be one with each other.  We won’t be able to help it.  It’ll just happen, because everything that divides us, those issues and actions that cause us friction and conflict,  those things that appear so huge when we are standing next to them, all of this looks pretty small beer compared to the passion and death of Jesus.

The scandal of Christian disunity.  If you say you’re becoming closer to God but at the same time you’re becoming more judgmental of other Christians and more isolated from them, then you are kidding yourself.  That’s not Jesus you’re getting closer to, but something else.  Maybe dogma, or self-righteousness, or self-justifying purity tests.  This is how people will know you are my disciples – if you love one another.

Now, let me say clearly – there are good reasons to leave a church – like death, or you’re re-locating, or because you can’t serve in that church – you want use the gifts God gave you at baptism but they are not welcome.  Or (the fourth good reason for leaving a church) your face doesn’t fit – you experience subtle or even blatant exclusion because of your color, gender, sexual orientation, education, class, or any other factor that people use to keep others at the margins of churches.

There.  That’s four good reasons.  My list of bad reasons for leaving a church is much longer.  But all of them can be summed in the word ‘conflict’ and the pride that stops us resolving it.

An angel appeared to a peasant farmer named Dmitri. “The Almighty has decided to bless you, Dmitri. Whatever you wish for will be granted.”

“There is one small condition,” the angel continued. “Whatever you wish for, your neighbor will be granted double.”

With this, Dmitri’s smile disappeared. You see, he had been at war with his neighbor for many years, ever since they had that dispute over the placement of a fence.  His neighbor insisted the new fence be placed ten yards onto Dmitri’s land.  But Dmitri had drawings his grandfather had produced which proved that the fence should be ten yards onto his neighbor’s land.  Wanting to make sure that he understood the angel correctly, Dmitri asked him, “So if I ask for a ton of gold, my neighbor will get two tons?”

“You have understood well.”

Dmitri thought in silence. Suddenly, his face brightened. “I’ve got it. O angel, make me blind in one eye.”

That’s a shocking story.  Who would ask for that?  Who would wish calamity on themselves as a way of causing double the pain for someone else?  Well, I suspect we don’t have to go to old Russian folk tales to find examples of it.  I think we see it when we hope for economic disaster or social unrest or a worsening of the pandemic if the political party we don’t support will be blamed.  We see it in countless less obvious but more personal times when I am willing to be known as a gossip in order to trash someone else’s reputation.  When I’m willing for people to view me as a jerk in order to get my own back on someone.  When I give up my peace, my joy, my conscience, my sleep in order to plot an action that will hurt my enemy.  When I do that, I am not just cutting off my nose to spite my face, I’m refusing the way of Christ.  I’m not elevating him. Because, when I elevate him, I come closer to others.   “When I am lifted up from the earth, I will draw all people to myself.”

I know that if I looked hard enough, I’d find examples of how factions in a church have been fought between themselves so bitterly that each side would willingly suffer if it meant making the other suffer more.  Those examples are out there, but I don’t want to disturb my own peace by trying to find them.  Instead, let me finish with my concern for the American church and its unity.  Because Christ’s church at this moment in history and in this country is living in dangerously polarized times, we can, as God’s people, find ourselves sucked into it.  The superiority our political tribe becomes so important that it takes the place of Jesus.  Our tribe follows Christ, theirs is pursuing evil.  And it breaks God’s heart.  Let us not be a part of demonizing other churches or different kinds of Christians because of their politics.  We’re better than that.  Let us raise up Christ and in so doing we will move towards our Christian sisters and brothers.