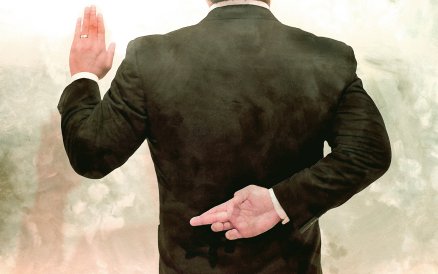 Don’t promise what you can’t deliver

A duck goes into a pub.  He waddles up to the bar, hauls himself onto a barstool and says to the barmaid, “Have you got any bread?”

And the barmaid says, “How many times do I have to tell you we do not have any bread?”

And barmaid says, “Look, I’ve had it with you.  If you ask once more If we have any bread, I will nail your beak to the bar.”

And the duck says, “Have you got any nails?”

The point being: don’t promise what you can’t deliver.

“I’m going to build a tower”, a man says to himself one day.  “I will recruit the best architect, hire the most skillful stonecutters, and I will create a tower so magnificent that all who pass will be inspired and moved.”  So, he begins his grand project, and within three months he has laid the foundations, within six he has built the base, but within twelve he runs out of money.  In all his excited ambition to make the world a better place he failed to count the cost, and his grand designs have resulted in a four-foot wall which mocks him and turns him into laughingstock.

Don’t promise what you can’t deliver.

“I’m going to fight for truth and goodness”, says the noble king.  I will mobilize my army, I will instruct my generals to devise a winning strategy, and I will lead my men into battle to execute justice and install a righteous peace.”  And so he sends a rallying cry throughout the kingdom, come and fight, come and be God’s weapons for righteousness.  And 10,000 men respond to the king’s call.  And out they go with hearts stirred and minds inspired to face the 20,000 men in the opposing army.  And the king sees a generation of young adults wiped out all because he didn’t count the cost.

Don’t promise what you can’t deliver.

“Come to Jesus”, he told me, “and everything will be fine.”  “Pray that your friend will be healed,”, she said, “and they will be.”  “Have faith”, they told me “and your life will be smooth.”  As a preacher I know the temptation to make promises that God won’t keep.  As someone whose dearest passion in ministry is helping to grow the church, I know the urge to exaggerate the benefits of the Christian life, downplay the challenges that come with being a follower of Christ, say and do anything that will make people turn to Christ and join the church.  And when I do that I am asking God to keep my promises.  And he won’t do that.  He’ll keep his own but won’t be forced into doing what I think he should do, in my puny wisdom.

And why should I want to make promises on God’s behalf, as if his weren’t amazing enough already.  What can I add to this: “I will never leave you nor forsake you”, despite the challenges you’re going through.  Or this: “No one will snatch you out of my hands” when you’re going through a time of doubt or failure.  Or this: “I go to prepare a place for you so that where I am going you will be also” when you’re questioning God’s love.  Or this when you’re struggling to overcome negative self-talk or harmful habits: “You will know the truth and the truth will set you free.”  Jesus does not promise what he doesn’t deliver.  He does not promise his followers a perfect life, free of suffering and challenge.  And the startling, sobering challenges we’ve just read prove it.

“You cannot become my disciple if you do not give up all your possessions… Whoever does not carry the cross cannot be my disciple… Unless you hate your family and your own life you cannot be my disciple.”  Now before you lose all hope and walk out of the church in despair let me reassure you.  Yes, this passage is full of challenge, but it is also full of hyperbole – that is a device that rabbis used to drive home their point.  They intentionally overstated their argument.  Everyone knew it, it wasn’t considered dishonest, they all knew not to take it literally.  So, when Rabbi Jesus says you must hate yourself and your family and give up all your possessions if you are to be his follower, he is trying to shock you into getting your priorities right, that’s the point; he’s not giving you a set of literal instructions.  Obviously he is not being literal, because hating your family is clearly at odds with everything that Jesus teaches us about love.  So, his intention is to shock, and I think you’ll agree he succeeds.

Don’t promise what you can’t deliver.  The tower builder got it wrong, the warrior king got it wrong, Jesus gets it right, what about you and me?  It forces me to consider my own promises.  How am I doing?  There’s one promise I’m feeling rueful about this morning.  Many years ago, when I was a young adult I was invited to be a godparent for a child, and I agreed.  So, at his baptism I made promises.  I regret to say that over the decades since, I’ve lost touch with that family and the child over whom I made the promises.  I don’t feel good about that.  I think, too, about my promises to Gelind, to my own children, to my bishop, to this parish, to God when I was confirmed, to the Queen when I was ordained, to the US Constitution when I became a citizen.  The naive tower builder and the foolish warrior king challenge me to make sure I deliver what I’ve promised.

During our trip to Florence last month, Gelind and I were blessed to visit the Uffizi – the art museum that houses a vast collection of Renaissance masterpieces.  Now, don’t judge me – please don’t think I’m a bad person, but when it comes to Renaissance art – I don’t really get it.  I’m sure there’s a very good reason why those artists painted their subjects looking completely free of emotion, even when they were experiencing extraordinary events, like miracles, angelic visitations, brutal murders, and vicious wars, but I don’t know what that reason is – I can’t read the clues.  Here’s an ancient saint being martyred, and he looks like … Here’s the Virgin Mary conceiving by the Holy Spirit and she’s like … Here’s Jesus being crucified and at the foot of the cross people are … But, I am pleased we battled the crowds of Renaissance groupies and toured the Uffizi because it was there we met seven young ladies.  They were Renaissance ladies, so they were all going … but they did catch my eye and capture my imagination.  They were painted by Botticelli and Pollaiolo and they are the Seven Virtues.  Faith, Hope, Charity, Temperance, Justice, Fortitude, and Prudence.  Did I hear anyone shout ‘bingo’?  Anyone got a full house?

And as I studied the seven women, each representing one of these beautiful Christian qualities, I was especially drawn to Prudence – we might call her wisdom in today’s language.  She was holding two things – a mirror and a snake.  Now, I could just about work out why she had a mirror – self-reflection.  Self-knowledge is a vital part of wisdom.  When we make foolish mistakes in life it is often because we don’t really know ourselves very well – we don’t know our weaknesses and vulnerabilities, we haven’t learned our purpose in life, we aren’t aware of what will make us truly fulfilled, and so on.  But a snake?  Why was Wisdom holding a snake?  And not a constrictor either, but a smaller, venomous looking one like a viper.  And she wasn’t holding it tightly around the neck so that it couldn’t bite her.  She was holding it somewhere in the middle about a foot from her neck.  Now, forgive me, Renaissance painters, I know I don’t understand your paintings, but surely, this is not an accurate representation of wisdom.  I mean, don’t promise what you can’t deliver, if you’re going to depict wisdom give her a book, or an owl sitting on her shoulder.  And then I remembered Jesus’ advice to his followers, “Be wise as serpents and innocent as doves.”

One possible response to Jesus’ warnings against making promises you can’t deliver is fear.  The kind of paralyzing fear that makes you decide never to make another promise in your life.  But there’s another response you can make.  Hear the Word of the Lord: Sometimes prudence grasps a snake.  Wisdom may take the risk.  Virtue assesses the danger, anticipates the pain, counts the cost, and walks the way of the cross.  Fear of not delivering doesn’t stop wisdom from making promises.  The truly wise know that often the easy way is not the way to prosperity; usually the path to growth, the road to contentment, the track to fruitfulness is steep, rugged, and littered with obstacles.  We have a higher calling that transcends the pain.  But we make that choice.  We stand at a font and make promises, we kneel before a bishop and make promises, we get out of bed and tell God that today in his strength and with his comfort, we will endeavor to live as his disciple – because we know we were made to male that promise.  And we do it basing our confidence not on our own ability to keep our promise, but because God is faithful to keep his.

Got any bread?  Yes, we have the bread of life, and the promise of God.