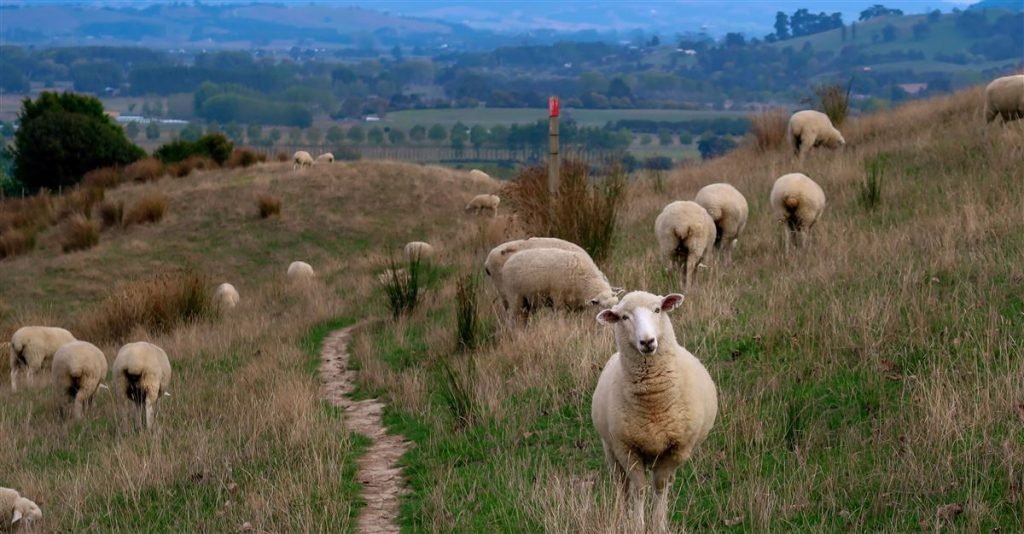 Well, it’s May 3rd, and so may I be the first person to wish you a Happy National Garden Meditation Day, or if you prefer a Happy National Specially-Able Pets Day, or maybe Happy National Two Different Colored Shoes Day, or Happy National Chocolate Custard Day, now we’re talking, or if you’re really desperate for something to celebrate today, how about National Lumpy Rug Day.  Face it, you’ve been sitting in your living room now for seven weeks, looking at the lump in the rug, telling yourself that you really should walk over and stand on it, but you’ve never had the motivation to actually do it (quarantine will do that to you), so this is the perfect moment.  If you can’t be bothered to flatten the lump in the rug on National Lumpy Rug day, then you never will be.

It’s Good Shepherd Day, too.  The fourth Sunday of Easter always is.  So, this is the day when we read some part of John chapter 10 where Jesus declares that he is the Good Shepherd.  And preachers, especially those who have never lived in the English countryside, struggle to find something to say about sheep.  Fortunately, I have lived in the English countryside, we  even owned a border collie at the time, but I’m afraid the border collie knew much more about sheep than I did.  In fact, he knew more about every subject than I did.  Cars, computers, the Dewey Decimal System.  Well, it is National Specially-Able Pets Day.

But I have read about sheep-farming in the Middle East at the time of Christ.  Now, shepherds kept their sheep in one of two ways, depending on whether they were in the village or out in the country.  Now work with me here, this gets a pit technical.  Villages had large, communal corrals.  At night, all the shepherds brought their flocks into the pen and left them in the care of a hired attendant.  A bit like valet parking.  So, in this sheep pen there’d be lots of sheep belonging to different farmers, and the attendant would close the gate and keep watch over the sheep, and in the morning each farmer would return and call his flock and lead them back into the fields.  Now that image is probably the one Jesus is thinking of in the first 6 verses of the Gospel lesson we just read.  “The one who enters by the gate is the shepherd of the sheep. The gatekeeper opens the gate for him, and the sheep hear his voice. He calls his own sheep by name and leads them out. When he has brought out all his own, he goes ahead of them, and the sheep follow him because they know his voice. They will not follow a stranger, but they will run from him because they do not know the voice of strangers.”

So that’s how village shepherds kept their sheep safe.  But out in open country there was another way.  There a shepherd would herd his sheep into a low walled enclosure made of rocks.  And this pen would have a small opening.  But interestingly, there was no gate to this enclosure.  There was just this small gap of 2-3 feet, just enough for a sheep to get through, and not much more.  Now, at night, since there was no gate, the shepherd would lie across the opening.  This would keep the sheep in and the wolves out.  No predator would dare step over the body of the shepherd to get into the pen, and no sheep would dream of hopping over him to get out.  So, here’s the point – the farmer literally became the door to the sheep pen.   “I am the gate for the sheep. All who came before me are thieves and bandits; but the sheep did not listen to them. I am the gate. Whoever enters by me will be saved, and will come in and go out and find pasture. The thief comes only to steal and kill and destroy. I came that they may have life, and have it abundantly.”

So, our Good Shepherd is also our door to the sheep pen – he keeps us safe, but he also leads us out into rich fields.  Safety.  Security.  Abundant life.  It’s a hard thing to say and it’s a hard thing to believe in the time of Covid when many thousands of people have not been kept safe.  In the NYC Metro area we may soon be at a point where every one of us knows someone who has died of the virus.  So what is the word of the Good Shepherd to a region ravaged by Covid?  Many Christian preachers point to verses like John 10:10 and interpret it as a financial and material thing.  I have come to give you life in all its fulness means, to them, wealth and health.  Pleasant circumstances are, they believe, the fruit of this promise of Jesus.  And by implication, the reverse – poverty and ill-health are sign that God is not, for some reason, blessing and protecting those sheep.

But in the face of massive human suffering we can’t agree with that, can we?  What we know of God’s heart, what we experience of the Good Shepherd won’t let us take such a view of this promise.  There must be something more to this pledge of abundant life from Good Shepherd to sheep that goes way beyond such small and temporary things as physical health and material wealth.  No, this is a dimension of human existence that the poets dreamt of and the prophets imagined.  An abundance that can’t be measured in dollars and youth.  This is abundance that exists even when we are sick and scared and broke.  Even when we have conflict.  Even when there’s still too much of the month left when the money runs out.   These are the moments when the Good Shepherd draws even closer to us.  It’s in those moments of fear and worry and pain that he calls us, in the words of the Psalm, to rest by the cool stream, to lie down in the soft grass, to receive from the Good Shepherd the comfort, the peace, and the courage we need to go on.

When the door to the sheep pen lies down and blocks the entrance he dares our predators to step over him and snatch us.  He won’t let the worry overwhelm us, the fear choke us and the division fracture our unity.  Covid entered the sheep pen, and so the enemy cannot be Covid – or the death and poverty that resulted.  No, the enemy in the bundle of things that want to come with it – the despair, the hopelessness, the fear, the crippling anxiety, the negligence towards our neighbors, the selfishness, and the fragmentation of society into two hostile groups along ideological lines that we are increasingly experiencing.  The Good Shepherd taunts these things because they don’t have that power.  Sure, we may get sick, of course, we may suffer in debilitating and devastating ways, but we  can never be snatched away from the love and the ultimate protection of the Good Shepherd.

In Australia they have a lot of sheep.  72 million of the bleaters.  There are only 25 million humans.  Now like every industry today, Australian sheep farming is being transformed by technology.  Ranchers attach tiny electronic tracking devices to the ears of their sheep.  It doesn’t harm the sheep at all, but lets them move freely around from the grazing area to the drinking area to the sleeping area unaware that they are being monitored by Big Brother.  Bill Murray (no, not that Bill Murray, this is sheep not groundhogs, I mean the Bill Murray who is spokesperson for the Australian Sheep Industry) says, “We can keep tabs on a single sheep for its entire life.  The transponders allow the sheep to make their own decisions, without being hassled by people or dogs.”  I suppose this computer screen it’s a kind ‘ewe-tube’.

Now this is not the kind of shepherding that Jesus was talking about.  The Good Shepherd does not sit at a monitor with his feet on the desk, drinking coffee, flicking through a copy of Sheep-shearing Monthly.  No, the Good Shepherd gets his hands dirty.  He has close relationships with his sheep.  His sheep, he says, listen to his voice, and he knows them.  He goes with them into the open hillside, and he stands watch when they face the danger.  He goes to great risk to protect them; in fact ultimately he dies for them.  We don’t need a computer tracking device in our ears.  We have a Shepherd who is with us.  And he promises that no one will snatch us out of his hands.

Tim Laniak, the academic dean of Gordon-Conwell Seminary, has interviewed a number of shepherds about their work, and in particular one burning question: “Do you know your sheep?”  And the replies shocked him.  Almost without exception, every shepherd assured him that, yes they knew every one of their sheep.  One movingly said, “I know the year the sheep was born, the circumstances of its birth. I know if it has broken any bones. I know which diseases it’s susceptible to, which foods it doesn’t digest well. I know which animals it doesn’t get along with. And I know its temperament—if it tends to wander or fight or follow.”

Now if your regular modern American shepherd knows her sheep that well, then how much more do you think the Good Shepherd knows you and me.  Being fully known by God and still being loved and accepted is so personal it’s almost frightening.  It can even make us want to hide.  God knows you.  I mean the real you and me – not the one I present in polite company.  I mean the other one.  The one that practically no one sees.  A woman once got into an elevator and looked around to notice she was standing next to Robert Redford.  She stared at him and eventually jabbered, “Are you the real Robert Redford”.  And he replied, “Only when I’m alone.”  I mean that you – the one when you’re alone.  That complicated, inconsistent, occasionally illogical, frequently infuriating, often unreasonable, broken, yet beautiful, unique, priceless apple of God’s eye they call ‘you’.  The Good Shepherd knows us better than we know ourselves.  He knows who we are deep down in those places where no one else sees and where even we are afraid to look.  The Good Shepherd knows us and calls us by name.

And so, this week, in the time of Covid, may you experience the Good Shepherd of Psalm 23.  May you lack nothing.  May you lie down in green pastures, be led by still waters.  Even though you walk through the valley of the shadow of death, may you fear no evil, for he is with you.  Surely his  goodness and love will follow you all the days of your life, and you will dwell in the house of the Lord forever.