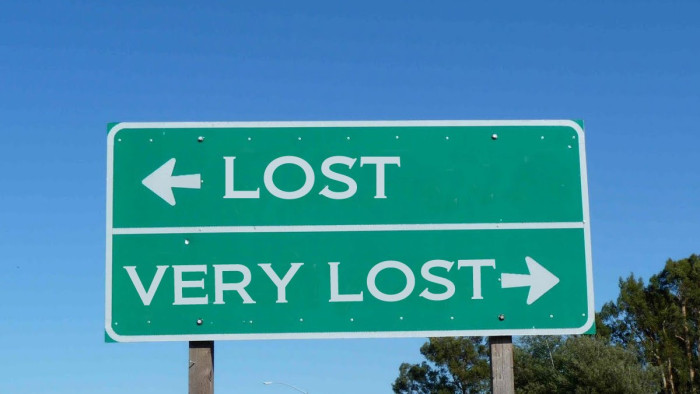 Finding Yourself When You’re Lost

One afternoon when I was nine I took the bus into town with my eleven-year-old brother, Keith.  We lived about four miles from the city center, and we’d often take the bus to look in the shops and stay out of mischief.  Keith was mature and responsible, at least he was in my eyes.  But somewhere during that afternoon we became separated and I was lost.  I wandered around the city center retracing our steps hoping to find him.  The town had never looked so big, its buildings never so strange, the people never so threatening.  After what seemed like hours I concluded that just wandering around wasn’t working, and I followed my father’s advice that if I ever got lost I should go to the place where the journey began and stay there.

So I went to the bus stop and waited, hoping that Keith would go there too.  Well, he didn’t and by now it was beginning to get dark and so I thought I should get on a bus and go home on my own.  The problem was I didn’t know which bus to take, or what stop it left from – there were three bus stops right next to each other.  Suddenly, I heard the voice a man from behind me, “Excuse me, son”.  I shot round to see a policeman.  “Are you Duncan?” he asked.  “Yes”, I said.  And instantly my day brightened.  Because I got to ride in a police car.  All the way home.  This would win me huge bragging rights at school.  When we got back to the house, there was Keith looking sheepish.  Mr Responsible had caught a bus hours earlier and left me to fend for myself.  But he was not the only person standing by the door waiting.  There was my mother – exhibiting all sorts of strong emotions, some my nine-year-old vocabulary couldn’t even name.  Anger was one, I recognized that.  But there were signs of other emotions, too.  She gave a huge sigh and her face relaxed.  Then she smiled, not at me, mind you, but at the copper standing in the doorway.  And then she gave me a very tight hug.  But of all those emotions it was the anger I had a vested interest in.  So I braced myself for the inevitable, “Where were you?  I’ve been worried sick.  How can you be so thoughtless?  Don’t you ever do that to me again.  Now go to your room until I say you can come out!”  So I plodded upstairs, thinking, “this is what she does when she’s pleased to see me?”  Parents are sometimes irrational.  But then, being rational is sometimes not all it’s cracked up to be.  Sometimes sheer, passionate, obstinate, unreasonable love will make human beings do odd things.  What a joyless place the world would be if we only ever behaved rationally.

So, how good it is to read the reaction of Mary, the mother of Jesus, to her son’s disappearance in the Gospel lesson today?  Jesus is twelve years old, and he and his parents have been in Jerusalem for the Passover.  This has been a pilgrimage.  As the festival is closing Mary, Joseph and a great crowd of people, including extended family and perhaps even their whole village, begin their journey home.  There are so many people that after a full day of walking, Mary and Joseph don’t realize that their boy is not with them.  They think he must be somewhere in the caravan, walking with his friends or relatives.  So imagine their fear when they realize he is not there.  Imagine their terror when they hurry back to the city and spend the next three days looking for him.  Three days.  So, where in a city of 40,000 people which has possibly grown to a quarter of a million during Passover … where do you look for a twelve-year-old boy?  Well, you probably don’t look in churches.  I’ve raised boys, and church is not the first place I’d look if one of them got lost.  Maybe that’s why Mary and Joseph don’t find him for three days.  Maybe they try everywhere except the Temple.  So, they finally go there, and there he is.

And Jesus’ response is a mix of puzzlement and innocence.  He is completely unperturbed, unaware even that his family had left days earlier.  The fact that his parents have been worried sick does not concern him.  In fact, he doesn’t get why they should have been worried.  Surely they should have known he’d be in God’s Temple.  What else would a 12-year-old boy be doing in the big city if not debating theology with the clergy?

I love this story because it shows us the only glimpse we have of Jesus as a child.  This is a story of conflict.  Two people are wrestling.  Not, so much, with each other, but with themselves, with their sense of identity and destiny.  One is Mary.  There she is, feeling the most intense emotions.  Three days of your child being lost.  And then finding him.  And she “cherished every word in her heart.”  What mother doesn’t cherish every word that her beloved says, and store them away, taking them out occasionally and dwelling on them, chewing them over, nourishing her soul?  Mary had known since his conception that this boy was going to be unique.  He was to be the Messiah, although she surely had no real understanding of what that would entail.  So there she is, puzzled, confused, questioning.  Who is this boy – flesh of my flesh, yet somehow more than that – somehow seed of God?  Who will he be, what will he do?  This experience of losing Jesus on the journey home surely causes her great pain, especially his apparent disregard for her feelings.  But she’d better get used to that.  Later he would tell her that the work of his Father was more important to him than his relationship with her.  Oh yes, it must have been hard to be the mother of God’s Son.  He is yours, but in another way he most certainly is not.

And then Luke says, “Jesus matured in wisdom and years, and in favor with God and with people.”  A regular child, growing in knowledge and maturity.  That’s a challenge, isn’t it?  We can think, well if Jesus was fully God, then he knew everything.  But, if he was fully human then he had to learn things the same way we do.  So Jesus was not born with a knowledge of 16th century French or the workings of the internal combustion engine.  He did not automatically get 100% in his math tests.  He had to learn to talk, to walk, to read and write.  If Jesus grew in wisdom then there were times when his wisdom was limited – when he did things that were maybe foolish, like any child.

I like these thoughts because if Jesus and Mary had to withdraw and ponder, and wrestle with who they were and who God was calling them to be, then that is Good News.  It means that when I am wrestling with who I am, then I am in good company.

Being who you are in God.  Finding your voice in God’s world.  Being God’s instrument in whatever way you are called you to function.  This is the perfect Bible passage for the start of a new year – at the end of an old year that was challenging beyond imagination.

I used to have a thing about Rob Bell.  Rob Bell is a preacher from Michigan who started a church of a handful of people until it became a megachurch of many thousands meeting in a converted shopping mall.  He is an extraordinarily gifted communicator, and I have tried to learn some of his techniques.  It’s tempting to look at Rob Bell and kind-of wish I could be him.  But here’s the truth: one day I’m going to stand before God and he is not to ask me, “Why were you not Rob Bell?”  He is going ask me, “Why were you not Duncan?”  We know what clergy are supposed to be, don’t we – strong in their faith, confident in their calling, mature in their dealings with other people, morally beyond reproach, resilient in the face of challenges, full of wise words for just the right occasion, living in happy families and doing everything with love and grace and in the power of the Holy Spirit.  But I will not be asked by God why I was not some fictional,  fake, faultless cardboard cutout of what society thinks a priest should be?  He going to ask me “Why were you not Duncan?” with my unique gifts and personality, and my unique failures, sins, and weaknesses.

A writer named Steve Wiens says that we all want to be happy, successful, and important.  We want jobs that provide personal meaning and financial security.  We want relationships where we’re loved and admired.  And on our journey to obtain these things we learn to hide who we are and play the role of who we should be, carefully following a script written for us to get what we want.

In 2021, let’s make a covenant with God.  An agreement to discover who we are in God, and then shamelessly to be that person.  That is all God asks of you.  As we grow in our relationship with God we become more fully who we are.  Growing in Christ means becoming our true selves in all our uniqueness and beauty.

I know because I hear your stories, that many of us are going through transitions.  In fact, if, after 2020, you are NOT going through some kind of transition, you are probably a hermit and you need to get out more.  God has drawn to a close one chapter of your life and is guiding you to discover who you are now.  All transition involves pain and disorientation, but it heralds new life.  May that be our 2021.