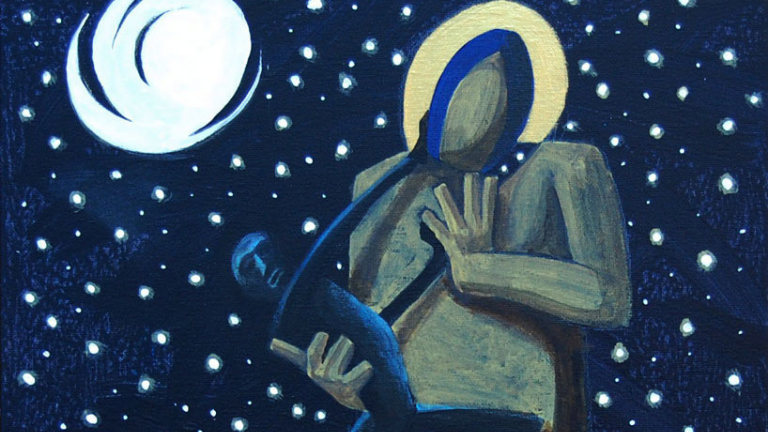 From Eden to Egypt Part 9: The God-wrestler

From Eden to Egypt: 9

The other day Gelind and I were watching TV and some character in the show started reciting a poem that was familiar to me.  So familiar was it, that even though I haven’t heard it for decades, I joined in.  The poem is actually a hymn, written in the 17th century by the Puritan John Bunyan.  And dropped into this TV show, it stuck out like a sore thumb, because this wasn’t a program with a Christian theme; far from it – it was the usual kind of show that Gelind and I watch, full of crime, murder, serial killers, and the like.  If I’ve just destroyed your fantasy of what clergy watch for entertainment, then I’m sorry.  Wake up and smell the forensic evidence.  Now the reason I was able to recite this poem is that it was my school hymn, and it perfectly sums up the view of Christianity that my school promoted:

Who would true valour see,

One here will constant be,

Shall make him once relent

Whoso beset him round

Do but themselves confound;

His strength the more is.

No lion can him fright,

He’ll with a giant fight,

But he will have a right

Can daunt his spirit:

He knows, he at the end

Then fancies fly away,

He’ll fear not what men say,

It’s a wonder that I or any other kid in my school ever wanted to be a Christian, given this terrifying vision of the life in Christ.  Hobgoblins, giants, foul fiends.  Fighting, struggling, labouring night and day?  Thanks, Bunyan, but I’m not attracted by your Puritan vision of being a Christian.  We Anglicans prefer armchairs to hobgoblins, Yorkshire terriers to lions, and a nice cup of tea to fighting giants.

Fighting and the language of warfare are a bit distasteful when applied to the Christian life, don’t you think?   And yet, embarrassing though it might be for 21st century, Christians, the language of warfare is all over the Bible.  The disturbing truth is that there is a cosmic conflict waging, even as we meet today.  Of course, it’s not people we are in conflict with, but unseen forces of evil that are intent on opposing God and destroying the apple of his eye – human beings.  And actually, I think if you ask most people, even those who don’t believe in God, they will tell you they do believe in good and evil, and that there is something powerful and malevolent in the universe that at times inflicts human beings with such dreadful suffering and cruelty that it transcends reason, that is truly evil.

Conflict.  Can’t live with it, and you can’t live without it.  Perhaps one of the worst kinds of conflict is that within families.  Welcome to this morning’s episode in our summer drama series “From Eden to Egypt.”  If you were here last week you’ll remember that Jacob had married his sweetheart Rachel.  He’d also been tricked into marrying her sister Leah.  And as we pick up the story Jacob has left the home of his uncle and set off towards the Land of Promise.  But to get there he needs to travel through the area occupied by his twin brother Esau – the brother he had tricked out of his birthright.  And, not surprisingly, Jacob is nervous.  So much so that he does what any sane person would do in the circumstances – he sends Esau a bribe.  He tries to pacify him with gifts.  220 goats, 220 sheep, 30 camels, 50 head of cattle, and 30 donkeys.  And he sends with them his two wives, Rachel and Leah, and his eleven sons.  I’m not sure what I think about that.  Is this cowardly or courageous?  Is it a failure of love that makes him send his wives and kids to a potentially dangerous place, or is it a strength that he strips himself of all he has and all he is and remains, alone, without props, possessions, and people, waiting for some sign that Esau is willing to reconcile.

When you strip yourself of all the props you open yourself to God.  When you discard all the badges of honor, the symbols of achievement, the sources of happiness and comfort, you give God a chance to speak.  That has been one of the lessons of the pandemic, hasn’t it?  As we have isolated we have given God the opportunity to teach us, train us, shape us, re-form us.  How has it been for you?  What have you been stripped of these last four months, and how have you met with God?

But in his lonely, anxious waiting, conflict occurs.  War breaks out.  Not between Jacob and his brother, but between Jacob and his friend.  A man came and wrestled with him until daybreak.  They battle all night.  And at dawn the man needs to leave, but Jacob won’t let him go until the man agrees to bless him.  And he does.  Not only that, but he gives Jacob a new name – ‘Israel’, which means ‘struggles with God’.  And Jacob concludes that the man is none other than God himself.

Wrestling with God.  I think you know what that means, because I believe you’ve done it too.  You’ve wrestled with God.  Sometimes I’ve looked at my circumstances, and they have been  unpleasant.  And so I’ve fought with God.  I grit my teeth, summon up all my might and I lock horns with the Almighty.  I have resisted the life he has called me to.  It has seemed to make no sense.  It looks like it’s all suffering, and for no good reason.  Suffering when you know there’s a purpose is bad enough, but pain that has no meaning can be almost unbearable.  Wrestling with God.

One of my favorite stories growing up was A Christmas Carol.  I love the part where Scrooge is visited by the ghost of Christmas Yet To Come.  Scrooge knows it, and so do I, that this spirit holds deep and terrible secrets about his future.  His miserable and tragic future.  A bitter destiny for a small-hearted man.  Both of us, Scrooge and I, know that he has lived a life of greed and cruel negligence, and we both know that if there is any justice in the mind of Dickens, the universe Ebenezer has turned his nose up at will treat him with similar damnation.  So, as Scrooge cowers under his bedclothes waiting for the clock to strike, both our hearts grow fearful.

“The Phantom slowly, gravely, silently approached. When it came, Scrooge bent down upon his knee; for in the very air through which this Spirit moved it seemed to scatter gloom and mystery.

“I am in the presence of the Ghost of Christmas Yet To Come?” said Scrooge.

The Spirit answered not, but pointed downward with its hand.

“You are about to show me shadows of the things that have not happened, but will happen in the time before us, is that so, Spirit?  Ghost of the Future!” he exclaimed, “I fear you more than any specter I have seen. But as I know your purpose is to do me good, and as I hope to live to be another man from what I was, I am prepared to bear you company, and do it with a thankful heart.  Lead on.”

I know how it feels to be Ebenezer.  Not that I dread divine judgment, because in Christ we are free from that fear.  No, it is this life that causes my knees to knock and my heart to sink.  I wait in dread for the ghost.  I find myself secretly, silently pleading with God.  Please God don’t call me to perform that task, don’t give me that cross to bear.  The ghost passes images before my eyes – a debilitating disability, a painful terminal illness, the tragic death of a close loved one.  And I wrestle with God about those things, and what if, one day, he calls me to live through these pains.

And then I think of my friend John.  John was born with spina bifida.  His legs did not develop in his mother’s womb.  John will never run down a beach, or walk up a hill and enjoy the view.  He will never kick a ball around with his son, stroll hand in hand with his lover through a meadow, feel the exhilarating buzz in his legs after a bike ride.  He’ll never stand under a waterfall.  I’ve known John for nearly thirty years, and I’ve seen him wrestle with God over several things, but never over God’s plan for him to live with spina bifida.  Able-bodied people often look at him with pity and wonder why God saw fit to allow this to happen to an unborn baby.  But John doesn’t ask that question.  He certainly does not court pity, and anyone who offers him it will have it thrown back in their face.  John doesn’t ask God why he was born with useless legs.  Instead he embraces his calling and lives it to the full.  He took up wheelchair sport and competed in the Boston marathon and represented Britain in wheelchair basketball.    About twenty years ago he was ordained.  He has a son.

John is one of my heroes because he shows me that when I’m hiding under the bedclothes with Scrooge, the things I fear can be faced.  John tells me that wrestling with God is OK, that it’s all right to have questions, doubts, fears; it’s OK to wrestle with the intellectual problems of being a Christian; that it’s perfectly acceptable to want to resist God’s will for me if it involves suffering,  But John also tells me that when the wrestling is over, when I’m just too tired to go on, when God has got me face-down on the canvass and in my exhaustion I smack the mat and voice my surrender, that there is a new life.

This summer, this week we are living with loss, and it hurts.  But it heralds something new.  We resist illness, we fight with God over becoming a widow or widower, we struggle with the call to singleness, wrestle with God over the loss of a job or a friendship or our youth.  But wrestling with God is good.  So go on, feel your resistance, ask God to take this cup from you.  And go on until it’s time to stop.  And then, dare you do something else?  Dare you do like Jacob?  Dare you ask for God’s blessing and all that might entail?  Spirit, lead on.