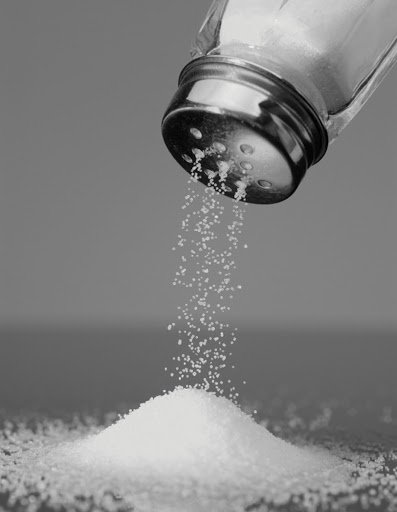 Get out of the Saltshaker

We eat on average 3,400 mg of it every day, but the American Heart Association says we should only consume about two-thirds of that, or about one teaspoon of the stuff.

I’m talking, of course, about salt, and I don’t wish to belittle this serious health warning or the potentially harmful consequences of consuming too much of it.  It’s a real thing.  But I’m British, and I don’t know what I’d do without salt.  The British have many faults, but eating tasty food is not one of them.  I remember the first time my children and I went to an American supermarket, and standing bewildered as we surveyed 85 different types of breakfast cereal.  Why, we asked ourselves, would anyone want brown sugar in their baked beans, or cheese in an aerosol.  No, when it comes to food, the British are truly the bland leading the bland.

We get around this by heaping salt onto our uninspiring dinners.  Salt, you see, can cover a multitude of culinary mediocrity.  Gordon Ramsey won’t tell you this, and you won’t see it on the Great British Bake Off, but salt for regular British cooks is completely indispensable.  Sauces and dressings have their place, of course – they add to the flavor, and a spoonful of sugar does help the medicine go down, but salt is different.  Salt brings out the flavor of the food.  It doesn’t mask it, take it away, minimize it, add to it, or disguise it.  It finds what is already there, hiding in your lunch, and draws it out to dance on your taste buds.

In the ancient world salt was extremely valuable.  For the Greeks, it was a medium of exchange – people traded things using salt, including human beings.  You know that phrase “she is worth her salt”?  Well, that is where it comes from – a slave is worth the salt that you paid for him.  In Rome, too, they knew the importance of salt.  The Latin word for it forms the basis of our word ‘salary’, and as you’d guess from this fun fact, part of a Roman soldier’s wages was paid in salt.

This place needs us – it needs you.  We are to season this world that is often bland and frequently tasteless.   You are the seasoning in your workplace, your school, your social circles, your online communities.  Get out of the saltshaker and into the world.

Because, every human being is made in God’s image; and every human activity is a search for the beauty, the joy, the perfection that we know as God, even if the authors of the project don’t realize it.  Yes, of course, human beings are fatally flawed, and yes all human enterprises are shot through with mixed motives, all human endeavors are marbled with sin.  We see it every day, and it hurts.  We don’t need to be told it – we weep over it.  But, because this is still God’s universe and humans are still made in his likeness, even though the whole order of things is messed up, there is still goodness in there – in every woman, man, boy, and girl.  Get out of the saltshaker, says Jesus, and bring out that goodness – spot the holy, the just, the good in people’s words, actions and motives.  Sprinkle the salt.  Encourage and coax out the good things that lie in all humanity.  How much better would the reputation of the Christian Church be if we brought the good out of people and institutions, rather than simply condemning the bad.  Jesus did not tell us we are the flamethrowers of the earth, the grenade-chuckers, the judges and critics and chaos-bringers of the earth, but the salt.  Everyone has good in them, and you can usually spot it if you look hard enough.  Even a broken clock is right twice a day.

There’s one place where I especially want to encourage you to shake the salt.  Online communities.  Your Facebook page, your Twitter feed.  These things are great and wonderful gifts.  Through them we share good news, inspire love, build relationships, learn useful and important facts, we listen to others and reflect thoughtfully on their perspectives.  We watch videos of baby goats wearing pyjamas.  But the dark side of human nature also uses social media to pursue the opposite of these things.  According to divorce attorney Howard Iken, 30 to 40 percent of divorce cases cite behavior on Facebook as a factor in a couple separating.  I can’t think there’s anyone with a Facebook account that has not been offended, hurt, or enraged by a post they have read.  With great power comes great responsibility, and social media gives us all a powerful platform to communicate things that will cause suffering and foster false beliefs.

In the autumn, Fr John Francis and I attended some anti-racism training in the Diocese and during the introduction to the course, one of the facilitators outlined the rules, including the need to ask ourselves a question before we spoke – an acronym – WAIT.  W-A-I-T.  Why am I talking?  So before we spoke we had to ask ourselves that question – am I speaking because my opinions are so magnificent that the world must hear them, or because I want recognition from the group, or because I want to prove that I’m not a racist, or what?  And now I want to challenge you, before you post something on social media, or repost someone else’s item, ask yourself WAIP – why am I posting?  If it is to slander someone, sow suspicion or misunderstanding of a person I disagree with, or is in any way unloving to my neighbor, then I must think again.  I am the salt of the earth.  In Luke’s version of today’s Gospel lesson Jesus says that salt that loses its saltiness is useless and is not even worthy of being thrown on the dung heap.  Make sure that the seasoning you drop into a conversation – whether online in in person, is from the saltshaker, not the dung heap.

Salt seasons.  Get out of the saltshaker and season your online community.

Salt also preserves things.  It was rubbed into meat to keep out insects and bacteria.  Salt literally stops the rot.  So, Jesus calls his followers to preserve the world we find ourselves in – Get out of the saltshaker and stop the rot.  Leonardo da Vinci got it.

In his world-famous painting “The last Supper” he depicts the twelve disciples sitting around the table with Jesus in the middle.  But there’s one little detail that casual viewers of the masterpiece can overlook.  There, on the table, by the arm of Judas is a salt cellar – an overturned salt cellar, with its contents cascading over the table.  Leonardo is telling us a deep truth – Judas had the power to preserve the life of Jesus but, carelessly, negligently, he knocked over the salt cellar and wasted his power.

Get out of the saltshaker and stop the rot.  Businessman, Malcolm Claydon writes about the pressure to go along with the rot in the workplace.  He writes, “Being salt involves a constant struggle to maintain standards of honesty and integrity in an environment where lies and deceit are commonplace.  What do you do, for example, when a customer pays an invoice twice in error and your company decides to say nothing; or when a supplier demands payment on an overdue account and your cash flow means he won’t be paid for some time yet?  Tell him the check is in the post?  Issues like these are commonplace for many of us and they are often not that clear cut.  A steadfast refusal to get involved with office politics has been a further issue that I have had to address.  I know several Christians whose careers have suffered because they have abstained from such activities.”

There is, of course, a fourth quality of salt, but this one is a bit of cheat.  Jesus definitely did not have this one in mind when he told his disciples that they were salt.  But it is one we in New Jersey in February are familiar with.  Salt melts ice.  And even though Jesus never had to sprinkle it on his driveway, I hope he’ll excuse me taking liberties by reading into his words something that he did not intend.  So, get out of the saltshaker and be the warmth that thaws the hearts of icy people.  Love transforms.  All it takes is for one person to make a difference.  Just one voice that will forgive or will defend the weak, or promote justice, or speak out for what is right.  Icy atmospheres gently melt when you and I take the love of Christ with us into a situation of conflict or hurt.