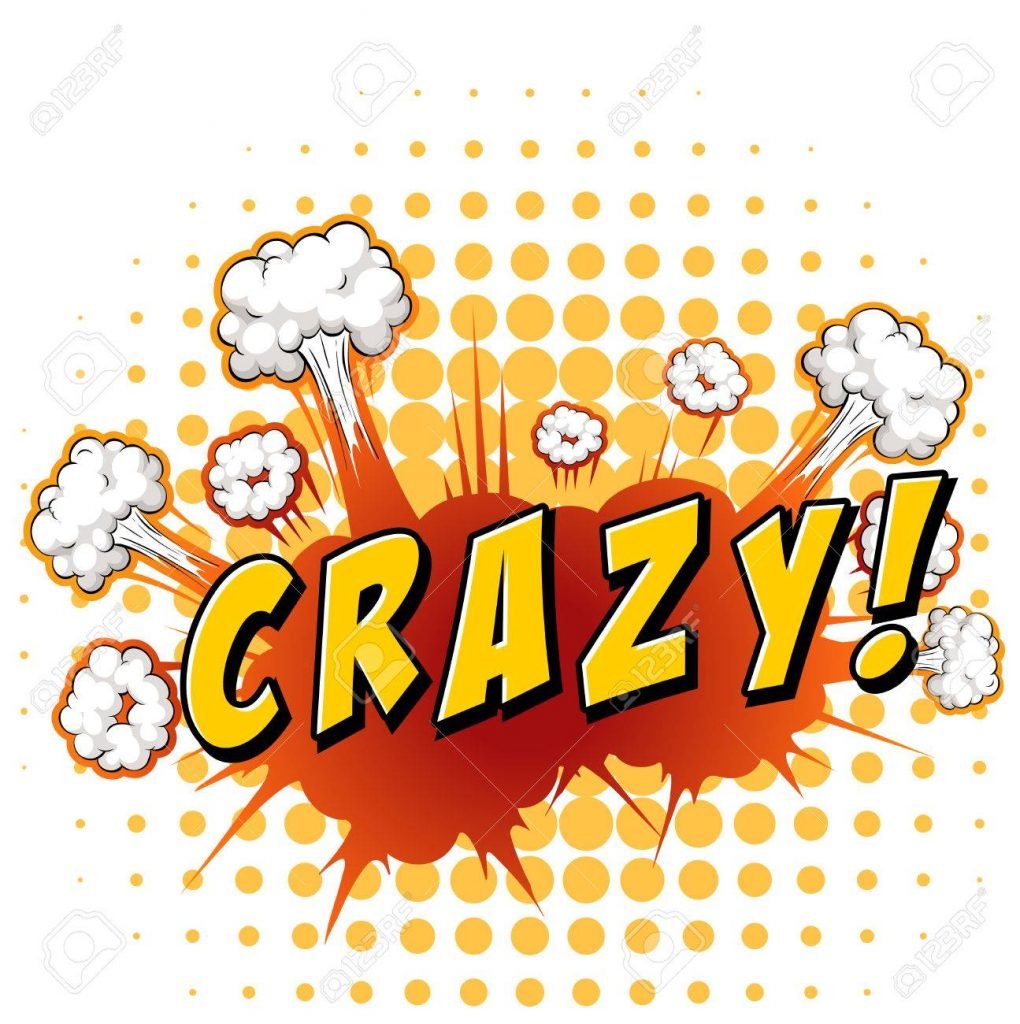 If they don’t call you mad, you’re doing it wrong.

North Jersey is my third home since I immigrated 18 years ago.  I started out in Michigan, then moved to Pennsylvania, and now to just a few miles from the Atlantic Ocean.  I’m creeping east.  My next home will be a boat moored 200 miles out at sea.  As you move from a small town in the Midwest, to the New York Suburbs you notice things changing.  There’s the traffic for one.  And not in a good way.  There’s the diversity of people, in a very good way.  And there’s the general way of approaching life.  In a very mixed way.  The further east you go, the less you care what others think of you, it seems.  Slapping your hands on the hood of a car and screaming at the driver because it looked for a moment like they weren’t going to stop for you, would never happen in the Midwest, but is commonplace around here.  I have found this very challenging.  But, after nearly four years  living in Westfield, I have come to a peaceful place with it, because I know there’s a refreshing authenticity about it.  When you bang on the hood of someone’s car and yell at them, it shows that you just don’t care what people think of you.  Those of us watching your outburst may think you are a complete jerk who maybe deserves to be hit by a car, but at that moment you don’t care.  You just boldly proclaim your truth – that the driver of the car is an even bigger jerk than you.

What troubles, is not that I think there is no place for smacking cars about and shouting at drivers.  No, it’s because I wish I could be that liberated.  I envy someone who just doesn’t care what people think of them, and I wish I enjoyed the same freedom.

“I’m just a soul whose intentions are good

If there were an anthem to my life, it would be that song by the Animals from the 1960s.  So often I find myself praying these or words like them  I’d take anything rather than being misunderstood.  I’m quite happy to be thought of as a sinner, just as long as long as people know I’m a well-intentioned sinner.  You know, I may do something that appears to be selfish or spiteful or unloving, but please understand those were not my motives.  I’m actually a really good person.  So, when I grab the last cookie at coffee hour, please don’t misunderstand – I’m not being greedy and disrespectful, there must be another reason, my motives must be pure, even if a foolish person might misunderstand them.  “I’m just a soul whose intentions are good.  Oh Lord, please don’t let me be misunderstood.”

I wish I were more like the famous trial lawyer Clarence Darrow who once said, “I have suffered from being misunderstood, but I would have suffered a lot more if I had been understood.”  I wish I could be more like Rudyard Kipling who wrote “If you can bear to hear the truth you’ve spoken twisted by knaves to make a trap for fools.”  I wish, well, I wish I could be more like Jesus.  “Then Jesus entered a house, and again a crowd gathered, so that he and his disciples were not even able to eat. When his family heard about this, they went to take charge of him, for they said, “He is out of his mind.”

“Wait, wait,” I hear you thinking.  “Did this Gospel lesson really start with the family of Jesus making an intervention with him because they thought he was crazy?”  Talk about being misunderstood.  “When his family heard about this, they went to take charge of him, for they said, “He is out of his mind.””

But it gets worse.  His family think he’s insane, but the religious leaders think he’s possessed by the devil.  “The teachers of the law who came down from Jerusalem said, “He is possessed by Beelzebul! By the prince of demons, he is driving out demons.”  The two groups of people who should be your biggest fans have become your fiercest opponents.  Your own flesh and blood think you’re certifiable and try to whisk you away from polite company, and the clergy call your work satanic.

Admitting you have tensions and conflicts in your family is extremely hard, especially for Christians.  Tragically.  The place where we should feel most able to be honest and open, and be accepted for who we are – the Christian Church – is often the place where we feel under most scrutiny and judgment, particularly when you live in a family that is the wrong size or the wrong shape according to the accepted norms of the Christian subculture.

Now, what I find so amazing about Jesus in this lesson – or in fact, everywhere in the Gospels, is that he doesn’t let the disapproval of the clergy and the misunderstanding of his family stop him doing what he knows is his mission from God.  What a gift, what assurance of God’s love, to be able to think so little of your popularity that you are able to shrug off the judgment of religious leaders and the misunderstanding of your family.  In fact, Jesus seems to accept the rejection of those he’s closest to with great calm.  “A crowd was sitting around Jesus, and they told him, “Your mother and brothers are outside looking for you.”  “Who are my mother and my brothers?” he asked.  Then he looked at those seated in a circle around him and said, “Here are my mother and my brothers! Whoever does God’s will is my brother and sister and mother.”

If his birth family are going to prevent him from going God’s way, then he will take his eyes off his birth family and focus on his spiritual family.  So much for “family values.”  For Jesus, DNA is less important than his devotion to God’s mission.

Feeling uncomfortable yet?  Well, you are not alone.  The people who compiled the King James Version of the Bible two hundred years ago, left out the part about Jesus’ family.  In that version it simply says: “And when his friends heard of it, they went out to lay hold on him: for they said, ‘He is beside himself.’”  Just left out the word ‘family’ completely!  In the version we use, the New Revised Standard Version, there’s similar queasiness about the idea that Jesus’ family could think him mad.  The translators put this accusation into the minds of others, not the family itself.  This is what we read just now: “When his family heard it, they went out to restrain him, for people were saying, ‘He has gone out of his mind.’”  But, in the Greek the word ‘people’ isn’t there – it is just the word ‘they’; so it is likely that the family of Jesus are not merely acting on what other people are thinking.  It is they who think Jesus is mad.

Jesus doesn’t care what people think.  If doing the work of God leads to being judged and dismissed, then he is willing to accept it.  If following God’s call leads to his family thinking him mad, he doesn’t want to be sane.

Some years ago, Apple ran a commercial on TV.  In it they showed a collage of photographs and film footage of people who have invented and inspired, created and sacrificed to improve the world. Bob Dylan, Amelia Earhart, Frank Lloyd Wright, Maria Callas, Muhammad Ali, Martin Luther King, Jim Henson, Einstein, Picasso, Gandhi and so on.  As the images rolled by, a voice read this poem:

Here’s to the crazy ones. The misfits. The rebels.

The troublemakers. The round pegs in the square holes.

The ones who see things differently.

They’re not fond of rules.

And they have no respect for the status quo.

You can quote them, disagree with them, glorify or vilify them.

About the only thing you can’t do is ignore them.

Because they change things.

They push the human race forward.

While some may see them as the crazy ones, we see genius.

Because the people who are crazy enough

to think they can change the world,

are the ones who do.

It makes me wonder – if I’ve never been thought of as mad, am I really following Christ?  If people don’t think I’m a bit unhinged, is it because I am actually just going with the flow, copying the values of the society around me, aping the patterns of our wayward culture?  If people don’t see how I respond to aggravation, or the way I talk to people when I’m having a bad day, or when I give or speak, or when I post on social media and think, “There’s something not quite right about him.  He’s different; he’s not right in the head”, then why are they not thinking that?

– The world worships logic, but God’s people live by faith,

– The world demands answers, God’s people are content with mystery.

– The world exploits the weak; God’s people exalt the lowly.

– The world rewards the strongest; we confess our struggles.

– The world relishes power; we glory in our weakness.

– The world says, “You are entitled to hate those that hurt you.” Yet, we love our enemies, and pray for our persecutors.

– The world grabs and hoards.  We seek to give it away because that is more blessed than receiving.

Hear the word of the Lord this morning: If they call you crazy because you are focused on God, then ‘welcome to my world.’  Let your freak flag fly.  There’s only one opinion of you that matters – God’s.  And he is crazy about you.  He’s proud of you.  You’re the apple of his eye.  Even when you’re not behaving perfectly.  If we know this, then what more do we need?