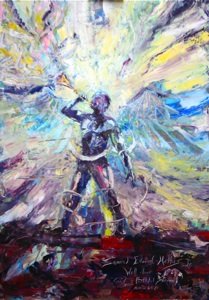 Dear God.  I thank you that I’m not like one of those Christians who thinks they’re always right.  You know the kind I mean, Lord.  The ones who stand on street corners condemning people because of their atheism, or their belief in evolution.  Thank you, God, that I am not like those Christians who take joy in telling people that their sins deserve your anger and judgment.  Thank you that I’m not one of those church leaders that deny the sacraments to people on the basis of their personal circumstances.  Thank you, God, that I’m open-minded, gracious, accepting of others – not like him over there.

Thank you, also, God, that I’m not like those Christians at the other end of the scale – the ones who are so open-minded that their brains are falling out.  Thank you that I’m not like them – with their belief that it doesn’t matter what you believe as long as your sincere; who see your Son as just another human being – no more divine than any other man or woman.  Thank you, Lord that that you are my number one priority – not like her over there.

What’s that, Lord?  Pharisee?  Me?  Surely, you’re confusing me, Lord, with those dangerous Fundamentalists like him.  They’re the Pharisees – pointing out other people’s faults, all the time failing to realize their own.  And those far-out theologians or whatever they are, like her – so smug in their own intellectual superiority.  They’re the Pharisees.  But not me, Lord.  Really?  Oh.  I see.  Amen.

Thank you for sitting in on my prayer-time.  And thank you for not judging me.  I hope you didn’t find it too shocking.  I’m ashamed to say that was only partly tongue-in-cheek, because sometimes I put on my thick winter coat, buckle on my skates and venture onto some very thin ice.  I glide along the surface of the frozen lake, spinning, jumping, full of bravado and self-assurance, surveying the behavior of other Christians and thanking God that I’m not like them.  Who here has NOT felt that urge rise within you when you have witnessed Westboro Baptist Church demonstrating at a military funeral?  Or when Christians have misused scripture and healthy Christian doctrines to exclude, condemn, judge or generally behave like jerks.  While you’re performing your double axel, you may say to yourself, ‘Well, they’re not real Christians, because real Christians don’t do that.”  But, be careful.  Hear that creaking sound?  That’s the ice breaking under your feet, as you triple toe-loop to the center of the lake. The moment I say, ‘That person who says they’re a Christian is not a true follower of Christ’, is the moment the weight of my judgmentalism becomes too much for the thin ice I’m skating on and I plunge to a freezing death.  The same frigid demise experienced by the Pharisee in Jesus’ parable today.

Dave Barry says, “The one thing that unites all human beings, regardless of age, gender, religion, economic status or ethnic background, is that deep down inside, we all believe that we are above average drivers.  (It’s true, isn’t it?  I don’t think I’ve met anyone who thinks they a bad driver.  I know I’m not.)  But there’s another frustrating, damning truth that remains a constant poison in the human soul – humans tend to think that our moral character is better than average.

The Pharisee goes to the Temple to pray.  Now, as soon as we read that we think we know what’s coming.  We’ve read the gospels, we’ve heard hundreds of sermons, and we know that the Pharisees are bad.  They are self-righteous and judgmental.  But try to suspend that belief for a moment, and see this pharisee the way the hearers of Jesus would have viewed him – a devout, holy leader, who does religion the right way, and is worthy of respect and obedience.

As he stands there, hands raised, and head tilted the Pharisee gives thanks to God.  Never a bad thing.  Except that what he gives thanks for is the fact that God made him holy and righteous and moral and decent.  “Thank you, God, that I’m like that, and not a moral delinquent.  In fact, God, thank you that you didn’t make me like that tax collector over there.”

Now again, forget our images of tax collectors.  This was not the guy from the IRS.  Biblical tax collectors were not regular citizens who pushed pens and operated calculators for a living.  Tax collectors in New Testament times were really hated.  Remember the political climate.  Israel was an occupied country.  The imperialist power was Rome, and Rome charged a tax to all residents.  It was a flat-rate tax and didn’t vary according to a person’s ability to pay.  So, it was unpopular and unfair because those with little or no income were charged the same dollar amount as the wealthy.  There was another reason why the tax was unpopular, and that is what it was used for.  It didn’t go to provide essential public services but to pay for the occupying Roman forces.  It paid the wages of the Roman soldier who stood on the street corner, sneering at you.  So, this tax was understandably despised.  But there’s more.  You don’t get to conquer half the world without a bit of savvy.  And instead of collecting the taxes themselves, risking civil unrest, the Romans paid local citizens to collect it.  So, the tax collector was not only charging this unjust and despicable tax, he was also a collaborator with the imperial forces.

So, going back to the parable, if you’re there that day, listening to Jesus you think: ‘Pharisee good guy, tax collector scum.’   And when the Pharisee prays, “God thank you that I’m not like him,” you think, “Yes.”

Now the tax collector prays.  And he doesn’t stride up to the place of prayer with the confidence of the Pharisee.  Instead he stands a long way back.  He slinks in slowly, nervously, with his head to the ground.  He doesn’t raise his eyes to God or hold his hands up, but beats his chest and prays, “God, be merciful to me, a sinner.”  And here’s the sting in the scorpion’s tale.  It was this man, says Jesus, who went home right before God.  “For all who exalt themselves will be humbled, and all who humble themselves will be exalted.”  Just another example of the topsy-turvy world of Jesus, where the last will be first, the first last, where the poor are blessed, where the rich are in danger, where the hungry are full-up, where those who love their lives will lose them, and where those who give up their lives find them.

George Whitefield and John Wesley were two of the greatest preachers and evangelists in the history of the English church.  At one point, Wesley and Whitefield had been good friends and close colleagues. But over time they had some serious and very public arguments over doctrine, and they decided they could no longer work together.  Some time later Whitefield was asked,  “Do you expect to see Wesley in Heaven?”  Whitefield replied, “No.  John Wesley will be so close to the Throne of Glory, and I will be so far away, I will hardly get a glimpse of him.”

I love that story because it tells us how to live as faithful Christians, in polarized days.  Like now.  Across the Western world, societies are fragmenting at distressing speed.  Fault lines are opening up and swallowing our communities.  The old days when people could disagree but respect their opponents for their public service and their worthy motives are gone.  Now, fueled by 24-hour news channels and online outlets, we can’t just respectfully listen, disagree, and go and have a coffee together; we are instructed to believe that the motives of our opponents are evil.  It’s not just that we have honest, well-intentioned differences of opinion on how society should be run to minimize suffering and promote peace and justice, it’s that the we have been told that those who disagree with us are inspired by evil and seeking wickedness.

As you know from my prayer at the start of this sermon, I would be the Pharisee in this story.  I look out at the world and see greed in business, scandal in Hollywood, crushing cynicism in the media, self-righteousness in Christ’s Church, self-promotion in places of power, violence, racism, and exclusion everywhere, and I pray, “Thank you God that I’m not like them – those power-hungry politicians, those greedy businesspeople, those scandalous celebrities, those judgmental Christians.  Thank you that I’m better than them.”  I pride myself that I hate no one, except people who hate; I’m not prejudiced against anyone, except people who are prejudiced; I’m not judgmental against anyone, except people I judge to be judgmental.  Do you see what I mean?  Even when I’m thinking like Jesus – when I’m spotting hypocrisy, I’m only a nanosecond away from committing the same sins I am judging the other person of.  And I’m left open-mouthed and wide-eyed as I contemplate the grace of God.  That somehow Christ sees the sins of others but loves them anyway, wants the best for them, can see past the bravado, the hate, the prejudice, the self-righteousness, to the vulnerable and often damaged soul that dwells behind the mask.  That is love divine, all loves excelling, and it silences me.

I don’t want to be the Pharisee thanking God that I’m not like those terrible sinners.  I  want to stand before God arm in arm with the tax collector.  He’s the hero.  He’s the one who looks only at himself and says, “God have mercy on me, a sinner.”  When we look down on other people’s behavior or criticize their spirituality, or disapprove of their lifestyles we’re standing shoulder to shoulder with the Pharisee on very creaky ice.  When we examine another church and declare them to be too rigid in their dogma or too flexible in their doctrine, then we’re heading for a cold swim.  No.  We want to be the tax-collector because it was the tax collector who went home right with God.

And so, fellow skaters, let us glide only on the thick ice.  Take a right-minded, sober attitude towards ourselves, and a generous one towards others.  And even when we’re right don’t allow that to make us think we’re better than other people.  Thank God for who you are – no better and no worse than anyone else – but all of us equally needing God’s forgiveness and grace.  Get your skates on and have fun out there.