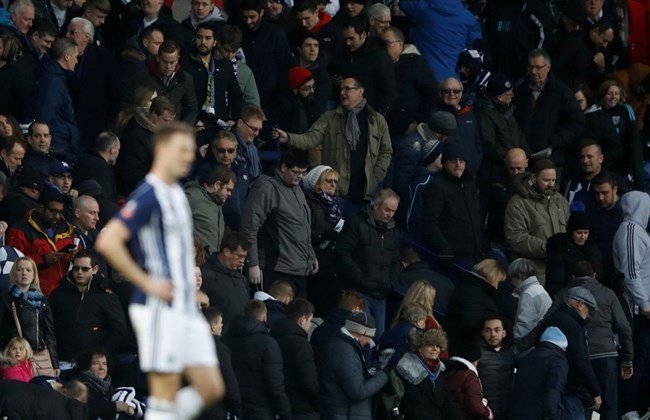 It’s not just tomayto or tomato.  There is a legion of differences between the British and the Americans.  Some of them are as trivial as how to pronounce that red fruit that forms the basis of ketchup.  (And yes, as every gardener knows, it is a fruit, but please don’t put it in your fruit salad.)  There are some subtle differences (such as one of us says ‘different from’ and the other says ‘different than’) and some differences that are really quite important and even, spiritual.  One of these big and important differences between the Brits and the Americans is how we watch sport.

In the US people watch sport to enjoy themselves.  They go to the game to have a good time.  It’s a fun night out.  Get together with friends, eat a hotdog, have a laugh, sing at the seventh inning strength, and occasionally glance at what’s happening on the field of play.  The other day I saw a commercial from Major League Baseball encouraging people to come back into stadiums.  And they showed a montage of happy fans dancing, laughing, drinking, eating, wearing the replica jerseys of their team, but also sitting next to each other in a sea of harmony despite one wearing red and the other blue.  No images of actual games, just fans being happy.  It’s clear the advertising company believed the experience of having fun was going to sell more tickets than the baseball.

To a Brit this is deeply unsettling.  The idea that you go a sports game to enjoy yourself is as foreign as grits and scrapple.  Any Brit will tell you don’t watch sport to have fun.  No, you watch in order to suffer.  The national game, soccer, is a winter sport and fans stand (yes, stand) in the rain and the cold, complaining, angry, and deeply miserable.  Not with a beer and a hot dog, but a polystyrene cup of tea and a steak and kidney pie.  The national summer game, cricket, takes over thirty hours to play, spread over five days.  Clearly, entertainment was never on the radar of the people who invented these games.  Enjoyment just isn’t the point.  The point is winning.  Your tribe beating the tribe from the other side of the valley and gaining  grazing rights over a piece of land.  Tribal survival.  It’s not a matter of fun, but of life of death.  These two approaches to sport are miles apart – ‘come and have a great time’ and ‘come and be miserable’.  I get the feeling that the average fan of US sport would rather see an exciting game which their team loses 10 runs to 9 than a boring game which they win one to nothing.  The exact opposite of the British sports fan.

I don’t know how many Americans were at the Feeding of the 5,000 – that is one of those details the Gospel writers are silent about.  But I think some in that crowd were motivated by the same lure that draws fans to Yankee Stadium or the Meadowlands.  If you were here a couple of weeks ago, you’ll remember that we read that extraordinary story of a boy and his lunch and a Messiah and a hungry crowd.   And in today’s Gospel lesson we’re still there, listening to a conversation between Jesus and some of the diners.  Jesus, you remember, declares he is the Bread of Life.  Something we read last week is that Jesus and his disciples have withdrawn to get some peace and rest, but some of the 5,000 come looking for him.  This crowd is pursuing Jesus.  But actually, they aren’t.  Not really.  They’re chasing what Jesus can do for them.  It’s not God they’re after, it’s more food or maybe more miracles.  They have feasted on bread and fish, and now they want dessert.  ‘Very truly, I tell you, you are looking for me, not because you saw signs, but because you ate your fill of the loaves.  Do not work for the food that perishes, but for the food that endures for eternal life, which the Son of Man will give you. For it is on him that God the Father has set his seal.’  This is a story about motives.  And it stings.  It really does, because it asks us a question that goes to the heart of our faith life.  Why are we doing this?  Who is it for?  Why are we here?  Why do we even call ourselves Christians?

Outwardly the crowd seemed to be on the right lines.  They were looking for Jesus.  You can’t knock that.  And yet, Jesus does, because he exposes their motives.  They’ve come to the right place, but they’re seeking the wrong thing.  The food, the miracle, the spectacular.  They seek Jesus for what they can get out of him.

As a pastor I find this incredibly challenging.  I want people to come to faith in Christ and be added to the Christian church.  That is why I was called to ordination.  But, in my desire to attract people to St Paul’s, am I in danger of preaching a brand of Christianity that turns Jesus from the Son of God into a self-help guru, and his religion into a lifestyle class, designed to make you feel good about yourself?  Is the Gospel I preach really the one of the Cross, or is it a comfortable therapeutic Gospel.  Does the Christ I present demand costly discipleship, or does he just want us to feel good about who we are, and boost our self-esteem.  In my urgency to attract people to the Christian life, am I offering them food that lasts for ever, or food that perishes.  The religion of Christ or a religion of convenience.

A priest was attending a meeting of clergy at a neighboring parish, and as she was early, she popped into the worship area for a few minutes to pray and collect her thoughts before the meeting.  She sat near the back, glanced around the nave, and was surprised to see that she was not alone.  Up at the front of the worship area there was the most exquisite statue of St John, after whom the church was named, and in front of the statue an elderly man was kneeling, apparently in deep and anguished prayer.  His mouth moved silently, and tears rolled down his face, as he stared intensely at the statue.  This had a very profound effect on the visiting priest, and as she made her way into the meeting, she told the host what she had seen.  “I have just witnessed a beautiful thing,” she said.  “Such passion, such devotion.  What is that dear man’s story.  What experience has led to him to offer his worship with such heartfelt love.”  “Oh”, replied the host priest.  That is Ted and he is a tragic man.  Don’t be misled by his emotion.  You see, fifty years ago Ted was a great athlete.  His physique was finely chiselled and perfectly honed.  He was strong, lithe, and muscular.  His hair was thick and wavy, his face the most handsome you could imagine.  Ted was famous for his athletic prowess and his looks.  As a recognition of his sporting achievement, the town commissioned this statue of St John, and Ted himself was the model.  You see,” the priest continued, “those tears are not ones of devotion or of love for God.  They are the tears of self-pity and nostalgia – Ted is not worshiping God; he is mourning the loss of his own youth and good looks.  He is worshiping himself.”

It is possible to come to church for the wrong reasons.  There is a danger for Christians to do the same thing with God.  When we pray or worship it is possible to be thinking, ‘What can God do for me?’, rather than ‘what can I do for God?’  A Twelfth century Christian called Meister Eckhardt said, “Some people want to see God as they see a cow, and to love him as they love their cow.  They love their cow for the milk and cheese it makes them.  This is how it is with people who love God for the sake of outward wealth and inward comfort.  They do not rightly love.”

When I was a young Christian at college, I was earnest, sincere, keen, genuinely desiring God.  But I was also impressionable, and I often chased spiritual food that Jesus would call the perishable kind.  I made judgments about what was nutritious and what would do me good based on external things, how things appeared.  I joined a Pentecostal Church because of the attractive outward signs of God’s work in the lives of the members.  An enticing dish.  Spectacular, supernatural signs of God.  And no doubt for those dear Christians they were genuine signs.  This, for them, was the true and living bread.  But for me they were not.  I was looking for certainty instead of faith, experience instead of perseverance, outward signs, but not the inner reality.  I was searching for the living bread, but I couldn’t see it because I was so smitten with the bread that perishes.  I was like the 5,000 who had experienced the miracle of the bread and fish, had enjoyed a supernatural feast, Jesus’ big picnic, and now wanted more.  They failed to see that the true, imperishable bread of life was the man who performed the miracle, and not the miracle itself.

John saw Jesus’ miracles as signs – signs of Christ’s true identity as God’s son.  But a sign is not important – well, not as important as the thing it points to.  A sign is just a sign – what it signifies is the real thing.  It’s like a red traffic light.  It’s a sign.  It has no value it itself.  The crowd at the feeding of the five thousand were a bit like a driver who sees the red light and focuses on it, while driving straight through the junction and crashing.  The red light is not there to be stared at; the red light should not be the focus of attention.  It is merely a sign.  The spiritually mature crowd, the truly alive gathering would have seen the miracles and then looked through them to the living bread.

Even in our Episcopal tradition we can confuse the eternal bread with the bread that perishes.  We are keen to experience the signs of God’s presence in our worship.  But sometimes we may be tempted to fix our eyes so much on the outward sign of God’s grace that we fail to look through it to what it points to.  Because, ultimately, we’re not doing this for our own enjoyment but for the love of God.  So, stand in the rain, shiver in the cold, cradle your polystyrene cup of tea, and remember who we’re doing this for.  We’re not in this Christian life for our pleasure and entertainment.  We’re in it because the love of God compels us.