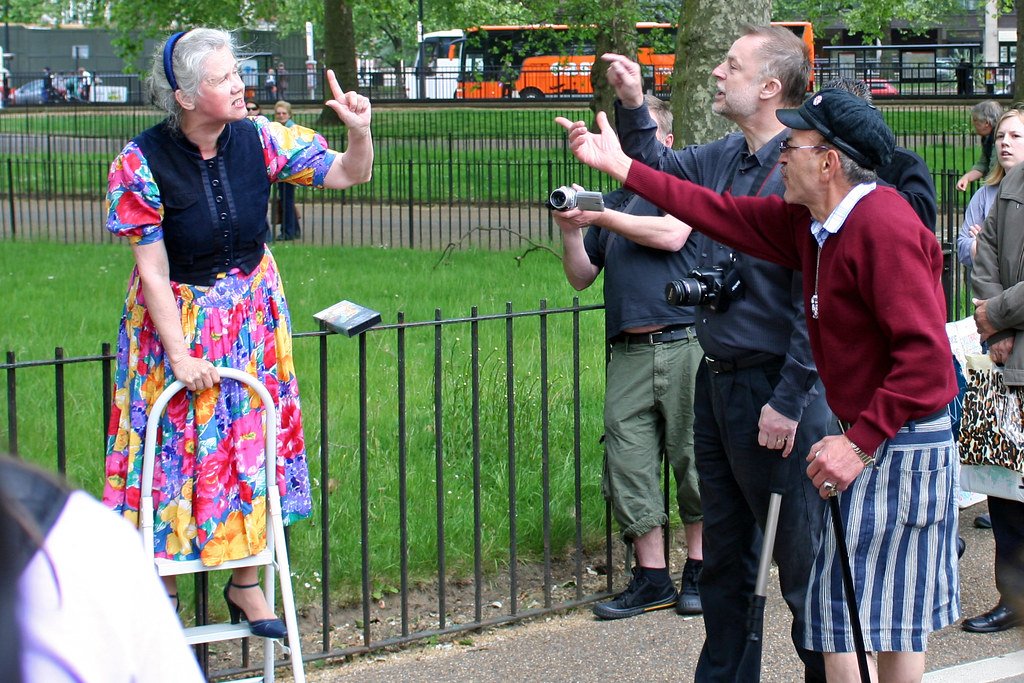 Tucked away in a corner of one of London’s parks is a place of conflict.  I’ve been there a couple of times, the second one being about ten years ago.  Depending on how you’re feeling when you visit, this small parcel of greenery in the center of London’s West End, is either a beacon of democracy (a symbol of the right to free speech; an ancient acre of liberty that proclaims the dignity of human beings); or it is a place of anger, divisiveness, and cruelty.  It’s called Speakers’ Corner.  Now, as you know from your High School history lessons, in the UK there is no constitutional right to free speech, because there is, you know, no actual constitution.  But for hundreds of years, people have shown up at Speakers’ Corner, carrying their soapboxes and their megaphones, to shout whatever is burning in their hearts.  If you like this sort of thing, it’s great fun.  But, be warned – you need a thick skin if you are going to visit Speakers Corner.  If you think that this free place of yelling whatever’s on your mind would attract, shall we say, alternative thinkers and unusual characters you’re totally right.  But among the eccentrics and the jokers there are always sincere and reasonable speakers – some Christian, some Muslim, some Marxist – some, well, it can be difficult to work out what they are.  Most speakers, though, are pretty dogmatic.  I mean you’ve got to have the courage of your convictions if you’re going to stand on a set of stepladders and bellow to one of the world’s great cities what you think.  As you’d expect, no one gets an easy ride from the audience.

Now I’m sorry to say that the last time I was there, the worst examples of arrogance came from Christians.  I was really rather embarrassed.  There was one preacher in particular.  He caught my eye and my ear, and purely because I was looking for good sermon material, I thought I would debate with him, but it was very clear that he had no respect for anyone who disagreed with him.  So, before I’d even really said anything he proclaimed that I was speaking the words of Satan.  And I thought, ‘Who told you?  Is it that obvious?’  My cover was blown.  And I replied, ‘with respect, sir, we’ve never met, and you can’t judge a person like that’.  And he replied that God had given him a supernatural ability to identify followers of the devil.  And like the bad guy in Scooby Doo cartoons, I thought I’d gotten away with it.

I wondered where Jesus would be that Sunday afternoon if he landed at Heathrow and taken the tube into the city.  I suspect he would not be at Speakers’ Corner, preaching to a crowd.  I reckon he’d be in another part of town – maybe a seedier, needier part, spending time with people who know their lives are broken and who are desperate for the love of God.  He would be looking for the lost, not debating with the self-righteous.  But, when it comes to John the Baptist, I’m not so sure.  I suspect he’d be at Speakers’ Corner.  The John the Baptist we read about in the Gospel would have been the first one there – not just with his soapbox, but with his portable sound system too.  And if I were in that crowd, maybe I’d dismiss him as one of the embarrassing Christians.  Maybe I’d cringe as I thought to myself, “John, look mate, you’re not doing our cause any favors here.  Talk about God’s love, stop condemning people’s behavior – don’t spout judgment – show them God’s grace.  Then they’ll maybe listen to you.  Oh, and while you’re at it, mate, get a haircut.  Look – that’s Oxford Street; go and get some nice clothes, lose the camel hair.  It’s so 1970s.  And stop eating locusts.  Burgers, not bugs.  How do you hope to win any converts looking and preaching like that?

“You brood of vipers”, he thunders to the self-righteous.  “Who warned you to flee from the coming wrath?  Produce fruit in keeping with repentance.  And don’t begin to say, ‘we have Abraham as our father’.  For I tell you, out of these stones God can raise up children for Abraham.  The axe is already at the root of the trees, and every tree that does not bear fruit will be cut down and thrown into the fire.”

God sent John on a mission; to get things smooth and level and flat for the Messiah.  And for that to happen John had to tap down the bumps of people’s greed, demolish their hills of corruption, and bulldoze their egos.  His task was to call people to change – to point out their moral failings and beckon them to a better life.  Because if people’s souls are full of potholes and rocks, and twists and turns, and hills and debris, they won’t notice the Savior when he comes.  The mountains and sinkholes will hide their Rescuer.  If you think you don’t need saving, then you’re not going to respond to the Savior.

In a nutshell, John’s message was this: Repent and bear the fruit of repentance. Because we can all say ‘sorry’ can’t we?  But John makes it a bit tougher than that.  True repentance is more than an apology.  It involves changing the way we live.  Repentance is not actually about the past, what we have done, but about the future – how we will live.  We may fail again in the same way, maybe hundreds of times, but we need to have that intention to live right from now on.  That’s what John means by the fruit of repentance.  The fruit of repentance is a changed life.  Twelve Steps programs call it ‘making amends’ – not just being sorry for how you’ve hurt someone but doing something about it.

In the Oscar-winning film The Mission there’s a vivid and inspiring picture of a man who repents and bears the fruit of that repentance.  The film is about a Spanish slave trader in the eighteenth century, Mendoza, played by Robert de Niro, who has no regard for human beings and no respect for God.  He hits rock bottom when he kills his own brother in a dual over a lover.  But, as he retreats into isolation, Gabriel a Jesuit priest visits him, and Mendoza confesses his life of sin.  And Gabriel sets him a task as a sign that his repentance is genuine.  He takes him to the Amazon rainforest, where there is a Jesuit mission high in the jungle above a waterfall.  Gabriel instructs Mendoza to gather together all the symbols of his sins – the crimes, the cruelty, the violence – and place them in a sack, and carry them up the mountain, high above the falls.  This is not Santa’s sack.  Far from it.  Mendoza’s is loaded with maybe 200 pounds of the tools of Empire, the hardware of brutality – swords, armor, pistols, gold.  And with this burden on his back, he climbs.  It is a great moment in the history of cinema.  But here’s the truly moving thing.  He doesn’t climb alone.  Next to him, sharing every foothold, feeling every splash of water that cascades from the mountain, labors Gabriel.  The priest never speaks to the prodigal.  He never lends a hand.  Not once does he even reach out to grab him when the load gets too much, and Mendoza loses his footing.  He just climbs quietly next to him, knowing that Mendoza alone must take responsibility for the weight of sin in his soul and the weight of the baggage on his back.  For only that is true repentance.  Finally, exhausted beyond imagining Mendoza reaches the top of the waterfall, where he’s met by the members of the tribe he had subjugated and exploited.  They are now Christians and members of the mission.  And Mendoza frees himself from the symbols of empire on his back, and hurls them into the waterfall.  And as the trophies of his power, ego, and depravity crash into the pool below, the broken sinner is made whole and begins a life of service to the people he has so grievously harmed.

Let’s leave the waterfall and return to the desert, where John gets specific.  He says to the crowds: “Whoever has two coats must share with anyone who has none; and whoever has food must do likewise.”  To tax collectors he says, “Collect no more than the amount prescribed for you.”  To soldiers he commands, “Do not extort money from anyone by threats or false accusation, and be satisfied with your wages.”

To regular folks – Share your stuff.  Compassion for the poor.

To people who handle money – don’t commit fraud.  Be honest.

When you think about it – this is not that high a bar.  On my very best days I can possibly make it through without committing fraud, using my power corruptly, or greedily hording all my belongings.  Actually, maybe not.  But you get my point – compare this with Jesus’ command to love God with all you’ve got and love your neighbor as yourself, and John’s instructions are almost achievable.  Have compassion, show integrity, and be content.  Er.

In the New Testament there are three kinds of moral teaching:

There’s the idealistic kind – Jesus says, “Be perfect as your Father in heave is perfect.”, “love your enemies and do not resist the evildoer.”  “Forgive as you have been forgiven.”  Challenges that inspire us and motivate us to try to live right, but they are ideals – all we can do is aim at them.  We will never fully achieve them.

Then there are cryptic commands – Jesus says, “If your eye causes you to sin, pluck it  out.”  Jesus sets us a puzzle – we have to figure out what this actually looks like in real life.

Then there are those down to earth instructions – like John’s today – share your stuff, don’t fiddle the books, don’t be a bully, don’t be greedy.

You know where you stand with John.  You grow the fruit of repentance – you don’t merely confess, you change.  You make a new start; you do a U-turn.  But in every other way, you stay where you are.  Jesus calls people to follow him – to fishermen: leave your boats; to tax-collectors: leave your office.  But John’s strategy is very different.  People come out to see him in the desert, he tells them to shape up and live right – and then sends them back to their old lives.  ‘Go home, do what you’ve been doing, but do it better, more ethically, more lovingly.  Be a better person while you’re doing it – compassion, integrity, contentment.  Compassion, integrity, contentment.  It doesn’t matter how many times you say it – it always sounds beautiful.  As we approach Christmas, let’s get our hearts ready for Christ.  Let’s do what we always do but do it with compassion, integrity, contentment.  Let’s bear the fruit of repentance.