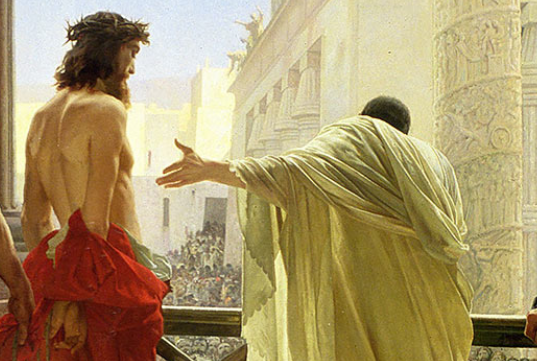 According to Martin Copenhaver, who clearly has too much time on his hands, in the four Gospels Jesus asks 307 questions.  He is asked 183 questions, and he answers only 3.  One of those 180 questions that Jesus did not answer is right at the end of today’s lesson from John.  “What is Truth?”  I’m glad he didn’t answer, because in this way I am like Jesus.  I wouldn’t answer that question either.  That is actually the only way I’m like Jesus.  But unlike Jesus, I wouldn’t answer it because I don’t know the answer.  Can you ask me one on soccer please, Pilate?  Jesus did know the answer but kept quiet.

“What is truth?” asks Pilate.  Can there be a more relevant question for 2021?  And I’m not just talking about how the digital revolution has allowed all of us to believe whatever we want about an event and find pages of authority to support that belief.  We are all experts on what happened, and we can all write it for the world to read.  ‘The democratization of news’ it has been called.  We’ve always had the right to consume whatever news we want, but now we all have the power to write it too.  We don’t have to pick up a newspaper or turn to a TV news channel to get the facts.  We can make them up; and the more divisive and antisocial they are, the more clicks or likes they will get.  Truth is whatever I want it to be.

Over the summer I watched a documentary called Fake Famous about three young adults who sought fame and all that comes with it.  The show set them up with a host of digital technicians, PR gurus, and image consultants to fake, yes fake, fame.  These consultants bought likes from a robot for their clients’ Instagram posts.  The young people posed for photos drinking champagne that wasn’t champagne, eating truffles that weren’t truffles, in exotic places that were actually their back yards or a mansion they rented for an hour.  Did you know that holding up a white toilet seat with a sky blue  background will make it look like you are on a plane, flying down to Cancun for a long weekend?  And, of course, the more money paid to the robots, the more fake likes they bought; the more fake likes they bought, the more real likes they received; the more real likes they received the more famous they became; the more famous they became, the more glamorous the lies grew; and the more glamorous the lies grew, the more companies sent them products to advertise.  It was beyond scary.  Not just for what this house of deceit did to the souls of those three young people, two of whom became deeply and negatively affected by the experiment; that was painful enough; but worse was imagining the countless number of young people who every day look at social media posts and feel crushing unhappiness with their own lives.  They’re not as attractive, or rich, or interesting, or popular as others.  “What is truth?”, asks Pilate.  “Well, don’t go looking for it on social media,” we reply.

And I’m not even going to mention the political posts on social media.  I know I don’t need to – you’ve already made that leap as I’ve been talking.  Many of you are anxious about Thanksgiving because you will share a table with people who believe different facts from you.  And you’re dreading someone mentioning politics and it descending into an argument in which everyone is totally convinced that what their facts are true.  “What is truth?”, asks Pilate.  “Well, don’t go looking for it in political arguments,” we reply.

I’ve said it before, but Pilate fascinates me.  I try to picture this scene.  There’s Jesus on Pilate’s Pavement – the prisoner before the prefect.  Pilate is the judge.  Or is he?  Because although it is he who is, literally, in the seat of power, posing the questions, trying to discover the truth, you get the feeling that it is the prisoner who is directing this conversation.  Pilate asks five questions in this passage: ‘Are you the King of the Jews?’  ‘I am not a Jew, am I?’  ‘What have you done?’  ‘So, you are a king?’  And that final ‘What is truth?’  And Jesus responds true to form – one he answers with another question, three he gives indirect answers, not really dealing with the questions Pilate has asked, and then the last one he doesn’t answer at all, but allows a silence so deafening and so long that even now 2,000 years later people are asking it.  What is truth?

Now, play with me here.  What do you think Jesus would have said if he had answered that question – what is truth?  Actually, we don’t need to guess.  A few chapters earlier he made a stunning statement about truth.  He tells his disciples “I am the Truth.”  Not religion is the truth, or his teachings are the truth, or the word about him on the street was the truth, or even that Law and Prophets are the truth, but he – the man Jesus of Nazareth – is the truth.

You see, like most people, Pilate is not interested in theology.  He doesn’t care about religious debates.  He wants truth.  THE Truth.  He wants the solution to his own deep hunger, the healing of his sense of alienation, the stilling of his internal troubled waters that tell him that he is missing out on the purpose of his life – he’s searching for the thing he was created for.  In that way, I’m Pilate’s brother.  Pilate has put into words the question at the heart of the human story.  And the answer of Jesus, a few chapters earlier, is simple but profoundly mystifying.  Jesus is the truth.  The second person of the Trinity is the truth.  The living Word that came down from heaven is the truth.  The Son of Man, the Son God, the son of Mary is the truth, the prisoner on Pilate’s Pavement is King of Kings, Lord of Lords, and the truth.

Truth, you see, is not a statement or an equation or a formula.  It’s not a dissertation, a newspaper article, or an Act of Congress.  Truth is bigger than words, bigger than ideas.  Truth is a quality of life.  The life integrity, transparency, honesty, purity, that we strive to live for the sake of God.  One person who preaches and practices truth is Desmond Tutu, the retired Anglican Archbishop of Cape Town.  In the aftermath of one of the greatest evils in modern world history – the demonic regime of apartheid, Tutu created, along with President Mandela, the Truth and Reconciliation Commission.  Because it is one thing to establish the truth, but quite another to be liberated by it.  Tutu believes that the glory of a new start is freely available – even for the perpetrators of gross evil.  But first, they must speak the truth.  The Rev. Maake Masango, former moderator of the Presbyterian Church in South Africa witnessed this.

A frail black woman stands slowly to her feet. She is about 70 years of age. Facing her from across the room are several white police officers, one of whom, Mr. van den Broek, has just been tried and found implicated in the murders of both the woman’s son and her husband some years before.

It was indeed Mr. Van den Broek who had come to the woman’s home, taken her son, shot him at point-blank range and then burned the his body on a fire while he and his officers partied nearby.

Several years later, Van den Broek returned to take away her husband as well. Then, almost two years after that, Van den Broek came back to fetch the woman herself. How vividly she remembers that evening, going to a place beside a river where she was shown her husband, bound and beaten, lying on a pile of wood. The last words she heard from his lips as the officers poured gasoline over his body and set him aflame were, “Father, forgive them.”

And now the woman stands in the courtroom and listens to the confessions offered by Van den Broek. A member of South Africa’s Truth and Reconciliation Commission turns to her and asks, “So, what do you want? How should justice be done to this man who has so brutally destroyed your family?” “I want three things,” begins the old woman, calmly. “I want first to be taken to the place where my husband’s body was burned so that I can gather up the dust and give his remains a decent burial.”

She pauses, then continues. “My husband and son were my only family. I want, secondly, for Mr. Van den Broek to become my son. I would like for him to come twice a month to the township and spend a day with me so that I can pour out on him whatever love I still have remaining in me.”

“And, finally, I would like Mr. Van den Broek to know that I offer him my forgiveness because Jesus Christ died to forgive. This was also the wish of my husband. And so, I would kindly ask someone to come to my side and lead me across the courtroom so that I can take Mr. van den Broek in my arms, embrace him, and let him know that he is truly forgiven.”

Jesus says his kingdom is not of this world.  Ain’t that the truth?  We may mistake it for weakness, because the Kingdom of God is not violent or coercive.

We may mistake it for softness because the Kingdom of God doesn’t threaten or manipulate.

We may mistake it for foolishness because the Kingdom of God does not demand attention or push itself forward.

The Kingdom of God doesn’t come through violence, it isn’t born in strength.

It isn’t maintained by terror; it isn’t sustained by fear.

It isn’t energized by revenge; it isn’t served by human anger.

Jesus stands on Pilate’s pavement and shows the truth.  God’s kingship is not demonstrated in flourishes of power and displays of might, but in the abject failure and utter powerlessness of a cross.