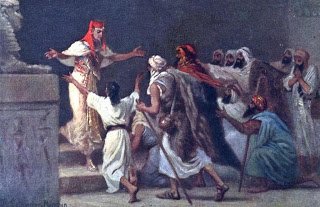 Pedestal to Pit to Prison to Palace

It’s Budapest, between the wars, and Ivan is frustrated. He has struggled too long to provide for his family, but all those years of backbreaking labor and soul-sapping sacrifice have taken their toll. All this blood, sweat, and tears and still there is no respite from the poverty that grinds his family slowly to dust. Ivan has had enough, and so he marches, like a man possessed, to the home of Rabbi Moshe. He pushes his way past the housekeeper and barges into the wise man’s office. “Life is unbearable,” he blurts out. The venerable teacher looks up from his writing and calmly tells Ivan to take a seat. He then rises from his desk, shuffles to a chair by the fire and sits opposite the seething young man. “There are nine of us living in one room. I can’t take it anymore. Since we had our fifth baby and my fife’s parents moved in, I am at my wit’s end. Rabbi, what can I do?”

Old Moshe rubs his chin, stares into the fire, and calmly responds. “Go to your shed, untie the goat, and bring it into the room with you.” Ivan’s jaw drops and he looks incredulously at the Rabbi. Moshe sees his consternation and continues, “Do as I say and come back in a week.”

A week later Ivan returns to Moshe’s study looking even more distraught. “I cannot go on,” he shouts at the rabbi. “That goat stinks to high heaven. It is dirty, noisy, it chews on the furniture and head-butts my children if they get in its way.”

The rabbi peacefully replies, “Go home and let the goat out. And come back in a week.” Seven days later Ivan floats into the rabbi’s office beaming from ear to ear. “I can’t thank you enough”, he chuckles to the old scholar. “Life is beautiful. Every minute is a wonderful gift from God now that smelly old goat is back in its shed and there are only the nine of us in our one room.”

Because perspective is everything. And usually in life there is more than one to choose from. And it is a choice. Something happens and we have two perspectives to pick from. Either this is an utter disaster; it is the end of something wonderful and the start of never-ending misery. Or it is a painful event, which God has under control and from which, in time, good things will grow. Disaster or opportunity, the end or a new phase, a sign that I’m cursed and fated to be unhappy or a brief spell of painful challenge which will transform me into a better Christian and happier person.

Of all the stories in the Hebrew scriptures I love Joseph’s the best. We pick it up at the very end, in this morning’s first lesson. It is such a good story that I feel in my bones that one Saturday night in the next couple of years we will have an Amazing Technicolor Dreamcoat Mass. Get to work on that, will you, Mark?

This is a stunning conclusion to a phenomenal life. You know it well…

Joseph is the eleventh of Jacob’s twelve sons, and daddy’s favourite. Jacob spoils him and gives him that coat. Not surprisingly, Joseph becomes a conceited brat. He thinks himself superior not just to his brothers, but even to his own parents. Joseph and his amazing Technicolor ego.

Not surprisingly the eleven brothers are not feeling warm and fuzzy towards Joseph and conspire to kill him. They beat him up, throw him into a pit, and leave him to die before having a pang of conscious and selling him to some wandering tribesmen instead. Because if you’re going to get rid of your brother you should at least make some cash from it. These nomads then sell Joseph to the Egyptians, and Joseph ends up becoming a successful manager in the house of the army officer, Potiphar. Potiphar’s wife, however, maliciously accuses him of rape and he is thrown into prison. To cut a long story short, some people have some dreams, Joseph interprets them, national disaster is averted, and our hero is made Prime Minister.

And there, on the throne of the second most powerful man in the Ancient Near East, sits Joseph, contemplating his hero to zero to even bigger hero journey – from pedestal to pit to prison to palace. But he misses home. He longs for the land and the customs of his people. He wonders how his parents are – are they still living? He forces himself to dwell painfully, penitently, on his youthful arrogance. How he regrets his pride. He’s had many years to ponder his brothers’ violence against him. If only he could see them once more, to somehow reconcile, to experience life together as a family, which his narcissism and their resentment prevented them from enjoying before.

Beaten up, thrown into a pit, sold into slavery, wrongly accused, and unjustly imprisoned. And now as our reading begins, kneeling in front of him, completely at his mercy, but unable to recognize him, are the men who started it all when they assaulted and sold him. What would you do? Your answer depends on your perspective. If Joseph sees himself as a victim of his brothers’ cruelty, he will use his great power to exact revenge. If he believes his life has been one disaster after another, he will punish them. If he thinks God has been unjust sending all his suffering, he will execute his own brand of justice. At the very least he will reveal his true identity and give them first class passage on the world’s most lavish guilt trip.

But what if Joseph’s perspective on his life is none of those things? What if he sees this extraordinary chain of events as being, somehow, for good? What if he is focusing on living fully today, without obsessing about the suffering of yesterday? What if he understands that God’s plans for him are for his benefit and growth, as well as that of others? What if he’s content to surrender to God’s will, even though he can’t understand it and even though it has involved terrible personal suffering?

Because that is the perspective of Joseph. Somewhere in a pit, or in chains, or in a prison cell the arrogant young man had learned humility. The brat had developed compassion. Daddy’s favourite had tasted the sobering truth of his equality with the rest of the world. In a verse we didn’t read this morning, Joseph says to his brothers, “You planned to do me harm, but God intended it for good.”

What a stunning perspective. To be on the receiving end of injustice, the sharp end of undeserved suffering and to say, “it’s OK. God has a plan – and it is a plan for good.” Now you may say, well it was fine for him to say that at the end of the story – when everything has turned out well for him. He’s now Prime Minister. Of course, he can see that God had a compassionate plan – to save not just Joseph but many thousands of people who were victims

of the famine that Joseph was managing. But what did he think at other times – in that dark, smelly prison cell as he contemplated the possibility of his execution? Was he so confident then that God had planned this for good? Or in that pit bruised and bloodied and then sold into slavery like a sheep in a market. Was he then so convinced that “my brothers meant to do me harm, but God has intended this for good?” We don’t know, but I know how it is for me. It’s only when my seasons of suffering are over and I’m enjoying new circumstances that I reach that mature perspective. We learn not all at once, but over a lifetime of little lessons, mini miracles, and gradual grace.

Forgiveness – the forgiveness that Joseph grew, is a process. Sometimes it has taken me many years before I have let go of the suffering someone has caused me. I nurse morsels of resentment. I jealously guard the right to blame someone for my circumstances. I cling on to the injustice I’ve suffered, as if doing so will make the perpetrator feel bad. The truth, of course, is that the only person to suffer from that is me. St Paul’s, hear the word of the Lord today – The last step on the path of forgiveness is when you can give thanks for the pain, because you know that unless you had gone through the betrayal you would not be in the better place you now occupy. That is the perspective – yes what was done to me was wrong, it caused me great suffering, but even though they meant it for harm, God planned it for good. Why blame someone when their actions have led to my life becoming happier? Why resent something that has brought me blessings? Why hold onto bitterness when if I had not been hurt, I would not be in the beautiful place I am now? Instead of being bitter I should be grateful that God turned a pain into profound blessing. When we can give thanks for the hurts in our lives because of the good that has resulted – then we have perspective.

Three masons were hard at work chipping chunks of granite from large blocks. The first was unhappy at his job, constantly looking at his watch and muttering to himself. A passer-by asked what he was doing. “I’m hammering this stupid rock, can’t you see?”

As the passer-by walked on, she saw the second mason, who was hammering with diligence and care. She asked him what he was doing. “Well, I’m moulding this block of granite so that it can be used in a wall. It’s not bad work, but I’ll be glad when it’s done.”

And so, she came to the third mason who was completely absorbed in his chiselling. Occasionally he would step back and admire what he’d done. He chipped and chipped. Even tiny pieces that no one would even notice because he wanted to do the best he could. When the passer-by asked him what he was doing, he stopped, gazed into the sky and uttered, “I am building a cathedral!”

Are you hammering a stupid rock, putting a stone in a wall, or building a cathedral? What is your perspective?

God has your life in his hands. He has your future carved out. Will it involve suffering? You bet it will. But his plans are for good – yours and those around you. Trust, forgive, move on, and live in the glory of his plans.