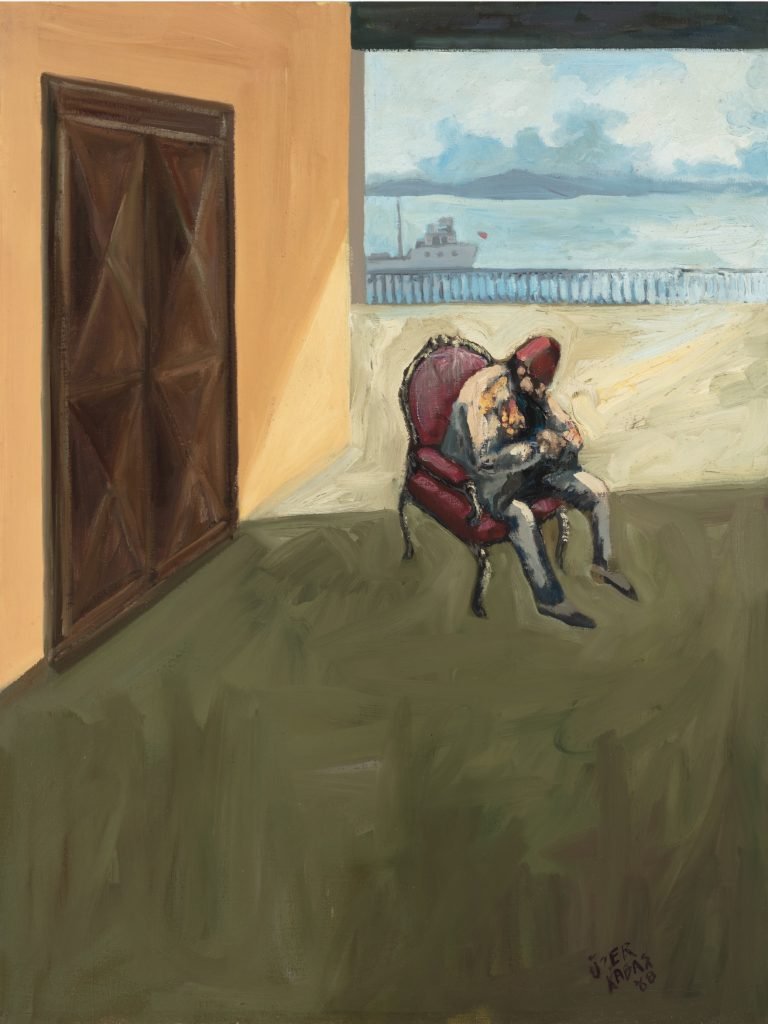 “There’s everything I want in my life, and it’s there. It’s a mile and quarter away. And yet I can’t get to it.” Those are the words of inmate 586. I heard the story of inmate 586 a few years ago when I was touring California. I was in San Francisco, wondering just why it was that for the few days I was there the city was under a permanent cloud, when I could see bright sunshine bathing land and sea in every direction I looked. I was also talking to the sealions, walking the Golden Gate Bridge (but not looking down – you know me and heights), eating delicious Chinese food, drooling over the boats competing in the America’s Cup sailing event; and I visited the Rock. Alcatraz.

Prisoner 586, or Jim Quillen, to give him the dignity that everyone is worthy of, lived on Alcatraz in the 1940s, when it was a federal penitentiary. And here I was, decades later, listening to his voice, recorded for posterity, describing his experience of incarceration.

“The yacht club, which was directly across from the island, would always have a big New Year’s party,” said Quillen. “If the wind was blowing from that direction to the Rock, you could actually hear people laughing, you could hear music. You know, you could hear all the sounds coming from the free world, at the Rock. And New Year’s was always the night we heard it. There was never a day you didn’t see what you were losing, and what you were missing, you know, it was all there for you to see. There’s life. There’s everything I want in my life, and it’s there. It’s a mile and a quarter away. And yet I can’t get to it.” For 34 men, the sound of parties was too powerful to resist. That’s how many prisoners tried to escape Alcatraz and swim the 2,000 yards to the mainland. None of them survived.

Meet another captive in another time and another place. This one we’ll call Prisoner 14,000, because that is how many mornings he had awoken to indignity, how many afternoons he had waited for God, how many nights he’d been longing for healing. Prisoner 14,000. There he is – lying just feet away from health and salvation, but always it is just out of reach. 38 years. 456 new moons. 1,976 Sabbaths he had waited and watched as someone else – there was always someone else – entered the healing waters before he could. You’d think he’d have given up hope by now. I would have. But not Prisoner 14,000. After 38 years of frustration he’s still there, pleading with God, hoping with all his might that this day, Day 14,001, God would smile on him, a kind stranger would help him into the pool, and this time the party would be for him. Oh those parties, those detestable parties. How many sick and disabled people had been washed by the healing water and emerged to family, friends, and celebration. Prisoner 14,000 would watch them run and jump and embrace their loved ones – at first, he felt some joy for them. They had been touched by God, and soon, it would be his turn to celebrate. But over time that joy turned to resentment, then shame, then anger, until his soul was bitter and shriveled – why them and not me? Why does God show up for her over there and leave me in my misery? What have I done to deserve God’s punishment? Why do my prayers go unanswered?

But, beneath his frustration there’s a tiny spark of hope. A small shoot of green life, stretching up to the sunlight. There must be – because he’s still there. 38 Passovers came and went, 38 harvests were gathered, and still Prisoner 14,000 keeps the faith, still he lies by the pool, and still he suffers his exile. You see there’s more to this man’s tragedy than physical disability. 38 years of being immobile will inflict an agony to your mind that can be even greater than the pain in your body.

When I heard Jim Quillen’s story, I was struck by its similarity to another form of incarceration – the exile of mental illness. Just as the inmates of Alcatraz could hear the laughter, but not attend the party, so it is that people living with a mental illness or disability can hear the singing, see the smiles, almost reach out and touch the revelry it is so close – but they can’t join in. If you have ever suffered from a mental illness or you love someone who has, you know that this truly is exile. There’s a barrier between the sufferer and the party that the rest of the world seems to be enjoying. Like all exiles it is lonely, exhausting, and crushing.

38 years of disability distorts your vision of the world. It disfigures your soul. It crushes your spirit. Prisoner 14,000 was sentenced to live life on the ground, at people’s feet, forever dependent on others’ generosity, daily being ignored or abused; in the eyes of some, barely even human. His perspective is knee-high. He is unnoticed, humiliated. His legs are useless, and his spirit is almost dead. Almost. So crushed is his spirit, that when Jesus asks him a direct question, “Do you want to made well?’ he can’t bring himself to give a straight answer. He can’t yell out ‘Yes’. He hums and hers and starts talking about the hopelessness of his situation. But he still shows up. Every day. Maybe today’s the day his exile ends. If you or someone you love is suffering from mental illness, I just want to thank you and commend you showing up. For deciding that today is not the day you are going to stop.

Some of you may have heard me talk about my experience of growing up in a home that was dominated by disability. And I don’t know how Prisoner 14,000 managed to show up – day after day for 38 years. I kneel in awe beside him. He’s still there, hoping that the next time the waters stir he can drag himself to the edge of the pool and fall in before anyone else can bathe in its cool medicine. Sure, we may quibble with him about the nature of faith, and point out that his is rather superstitious – he believes that an angel disturbs the surface of the water and at that moment the first person in the pool receives their healing. But, undeveloped, though it is, it is still faith – in a God who creates medicinal waters and heals his children.

May, of course, is Mental Health Awareness Month, and I love it how this Gospel lesson turns up in the month of May. Because Prisoner 14,000 gets us. He is eerily modern. He is made for our pandemic, and the Jesus who healed him after 38 years of waiting, also gets us.

We have spent over two years exclaiming how we’ve never been through anything like this. And it’s true. We were all familiar with stress and exhaustion before the pandemic, but covid has added so much more. For many, the isolation of the early months was devastating. Anxiety, loneliness, the absence of community were brutal. For others, the losses were more tangible – a friend or relative lost to the virus, a business or a career cut short. For yet more, the sheer never-ending course of the pandemic has taken a different sort of toll – not the shock and terror of those first few months, but a long, deep, almost invisible decline into a life that lacks energy, purpose, and joy. Many of us feel demotivated and deskilled. Folk who used to enjoy active social lives now feel they have nothing to offer in a social setting; the life and soul of the party now feels anxious about socializing – not because they are cautious about the virus, but because they’ve lost the skill and the desire. Countless people who used to volunteer, to serve their communities – in churches and elsewhere, have felt their enthusiasm strangled and their life-force eroded.

According to the Health and Human Services website, HHS.gov, even before the pandemic, mental health challenges were the leading cause of disability and poor life outcomes in young people, with up to 1 in 5 children ages 3 to 17 in the U.S. having a mental, emotional, developmental, or behavioral disorder. From 2009 to 2019, the share of high school students who reported persistent feelings of sadness or hopelessness increased by 40%, to more than 1 in 3 students.

Then came covid. The medical journal the Lancet last October published results of a study that found that mental health around the globe plummeted in 2020, with an estimated 53 million additional cases of major depressive disorders and 76 million additional cases of anxiety disorders. In the first year of the pandemic, there were an estimated 52.9 million people over 18 in the United States with a mental illness, that is 21.0% of all adults.

Back to Prisoner 14,000 at the Pool. If he has not become depressed by the hopelessness of his condition, then I don’t understand how. He has more resilience than I possess. And his faith was rewarded. Like every day, today he was at the pool; like every day, he hoped for healing; and like every day, he had no one to help him when the water stirred. But today he didn’t need anyone to help him into the pool. Because God’s compassion mugged him. Why today? What took God so long? I don’t know. Here’s all I know. God loved him every day of those 38 years. He just showed it in different ways – giving him faith, resilience, hope. But today God showed his love in another way – no more so than he did in the 38 years of illness, just differently. Sometimes God heals our illnesses, and sometimes he doesn’t. The one constant is his love which doesn’t change with our circumstances. And so we show up – each day – for God and for each other. And if there is someone in your life suffering from mental illness – we show up for them. Whether their exile is 2,000 yards from healing or a few feet. We support and encourage. And we help them see the Jesus who stands beside the pool.