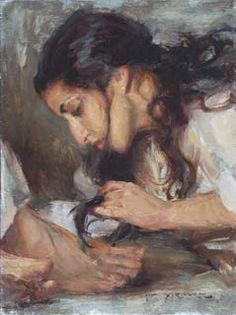 How much would you pay to smell nice? Not that you don’t already, you understand. But just suppose you needed to supplement the natural aroma with a little something. What would you pay? I’ve been looking at the prices of fragrances. They range from $6 – that’s how much you’ll pay for a really small bottle of Giorgio Yellow. Apparently, it’s a ‘formal feminine fragrance that blends the scents of bergamot, orange, ylang-ylang and musk’. But, if your nose deserves something finer than that there’s Angel for $60 – ‘Its fragrant nature explores essences of honey, chocolate, and caramel and is blended with notes of vanilla, patchouli, and sandalwood’. I can almost taste it. And because this is an equal opportunities sermon let me say that men can smell good also for as little as $6, which is what you’ll pay for a small bottle of Drakkar by Guy Laroche (‘a typically masculine scent with a classic fougere accord. Now updated with a contemporary fruity note, this fragrance is sharp and spicy with lavender and amber undertones.’ I don’t know what a classic fougere accord is, but I reckon you should drive it and not splash it on your face.)

But what if you need something altogether classier. Well, according to Forbes magazine the most expensive bottle of perfume you can buy is called Imperial Majesty. It is a limited edition of a Clive Christian fragrance and is on sale at Harrod’s and Bergdorf Goodman. And it is, I think you’ll agree, very reasonably priced at $250,000 for a 16.9-ounce bottle. Actually, what you’re really paying for is the packaging. It comes in a Baccarat crystal bottle, with a five-carat diamond set in an 18-carat gold collar. Only ten bottles were made. But I met this guy in the pub who can get you one for 25 bucks. Now, the gentleman’s cologne version of Imperial Majesty is available for $435,000. But can it make you surf the way Old Spice can?

I hope that none of us would spend a year’s salary on a bottle of perfume. If you would, you and I need a little pastoral chat. And you need a pledge card. But that is the setting for today’s shocking Gospel lesson. Jesus is at the house of the siblings Mary, Martha and Lazarus. The twelve disciples are there too. We’ve been to this house before. We know it well. We were that fly on the wall that other day when Jesus visited. We were humbled to watch that same Mary as she sat at his feet, transfixed by his every word. We chuckled to ourselves at that same Martha who ran around doing housework, the wonderful host but too busy to sit with Christ. We were at that house on another occasion too, on that terrible day when that same Lazarus succumbed to his illness and was laid in his grave. But, joyously we were also present that glorious moment when Jesus called him from his tomb.

So, here we are again. Martha is serving (no surprises there) and Lazarus is entertaining their guests, maybe with the story of how we was just getting used to being dead when this weird thing happened. But the third member of the family, Mary, goes way beyond the normal conventions of hospitality. She takes a pound of nard, an expensive perfume, and pours it on Jesus’ feet, and then wipes it with her hair. 300 denarii. One year’s wages. This was Imperial Majesty stuff.

Not surprisingly, Mary’s actions scandalize those present. Judas sees this extravagance as a huge waste of money and he protests, “Why wasn’t this perfume sold and the money given to the poor?” Mmm. Good question. Really good question. I think I might have asked the same thing. What a waste. A year’s wages … to pour on someone’s feet? Think about the good that could have been done with that money – the suffering that could have been relieved, the under-resourced people who could have been helped. I bet when you came to church this morning you didn’t think you would end up agreeing with Judas! But, he has an excellent point. And Jesus’ response seems pretty shocking and annoyingly cryptic. He says, “Leave her alone. It was intended that she should save this perfume for my burial.”

There’s something weird going on here. The disciples are enjoying a pleasant evening, having dinner with their friends in Bethany, and out of the blue Jesus brings up the topic of death – his death. What’s happening – what is it that Jesus knew, and Mary, in her beautiful intuitive spirit knew, but everyone else, including us, failed to spot? Are you ready to hear it? The shadow of death hangs over this house.

This event takes place within the shadow of Jerusalem. It’s just two miles from the city. Stand on the roof and you can see it clearly. Peer very hard and you can make out the Temple shimmering through the heat haze. I dare say, with the wind in the right direction, you can hear the sound of nails being hammered into wood. And get this – it’s six days before Passover. Two miles from Jerusalem, six days before Passover. Did you just feel something run down your spine? Because we know what happens six days later, don’t we? We have seen the end of this movie and we know what awaits Jesus at the end of that two mile journey – that half-hour parade – on a donkey, past waving palm branches, over strewn coats, and on into the seat of power and religiosity, the place where corrupt religious leaders would do away with a man who threatens to derail their gravy train, and where brutal secular rulers would tolerate no hint of opposition to Caesar.

It’s the day before Palm Sunday. It’s as if Jesus is saying, “Friends, we’re going to Jerusalem. We have had a miraculous three years. We have laughed together, cried together. We’ve felt the sting of hostile words, seen the ugliness of hate, tasted the bitter herbs of rejection. We’ve lifted each other, carried each other, borne the pains of each other. There were times we thought we could not go on, so tired were we, so wounded, so battle-scarred. But we have seen faith reborn, hope ignited, hungry people eat, mournful people dance, the marginalized included, the forgotten remembered, the lonely loved, the dying healed, and the dead raised. We have had three years of hell, but three years of heaven – breaking out wherever we were received, blooming wherever people of goodness dwelt. It’s getting late. There’s somewhere we have to be. There’s a place I have to go. Wake up and smell the nard. Tomorrow we’re entering the city. Crowds will go wild, they’ll wave palms and put their coats on the ground, but don’t be fooled. The poor? Sadly, they’ll still be here next week, and the week after, and for ever. But we need to mark this last time together before I die. Next week, then we will think about the poor, then we will change the world because the world will have changed.”

Do you remember Easter morning? Mary Magdalene goes to Jesus’ tomb to anoint his corpse with spices. Remember that? That was why she went to the tomb early that Sunday morning. And on the way she meets the Risen Christ? You see, tradition demanded that dead bodies were to be anointed before burial. But, she had not been able to do it on the Friday afternoon because by the time Jesus had died and his body was taken down from the cross, the sun was setting, Sabbath was about to start, and the law prevented people from touching dead bodies on the Sabbath. So, the body of Jesus is quickly buried as the sun goes down, without receiving that anointing with perfume. So, Mary Magdalene hurries to the tomb at first light, the day after the Sabbath, to do what she didn’t have time to do on the Friday afternoon. And when she gets there she can’t even do it then, because there is no body. Jesus has risen.

So, the corpse of Jesus never did get that anointing – ever. Instead, it happens now at the home of Mary, Martha, and Lazarus, a week early. Mary prepares Jesus for his burial, a week before he dies. The air is thick with nard, but the impending death of Christ also permeates the house.

But the nard was just the tip of the ‘iceberg of shock’. Mary is our sister and our role model. Let’s count the sacred cows she slaughters:
1 She wastes a year’s wages on anointing Jesus feet.
2 She does it herself. Washing the feet of guests was a custom, but it was one performed by the lowest household servant. Here’s Mary, the lady of the house, stooping with the kind of humility that surely embarrasses everyone present.
3 She touches Jesus, casting another social convention to the ground. A woman never touched a man except her husband and children – and then only in private.
4 And finally, Mary wipes Jesus’ feet with her hair. Now, in order to do that, of course, she has to have her head uncovered, and in that time and place a respectable woman would never appear to people outside her family with her head uncovered.

The true cost to Mary is not just a year’s wages. It includes her reputation and her dignity. We are in the presence of greatness this morning – not only Jesus, but this woman who risks misunderstanding, disapproval, and judgment. Judas voices it, the others merely think it.

In these final two weeks of Lent Mary breaks open a perfume jar, and breaks open my hard heart. She kneels before Jesus to pour her ointment, and she kneels before me and begs me to worship with the same uninhibited, sacrificial service. She touches those divine feet and calls me to touch people in my life who need compassionate connection. She literally lets her hair down and challenges me to abandon myself in the worship and service of God.

This is a magnitude of devotion that I struggle to understand. I can’t get my arms around it – or my head. Imperial Majesty, it seems, is not just a fancy perfume. It sums up Mary’s vision of Jesus.

It’s getting late. Our journey to Jerusalem is nearing its end. There’s a donkey outside. Let the sounds of the city linger in your ears, let the smell of the nard awaken your senses. May we abandon our reservations, lay down our misgivings, rise and go with Christ.