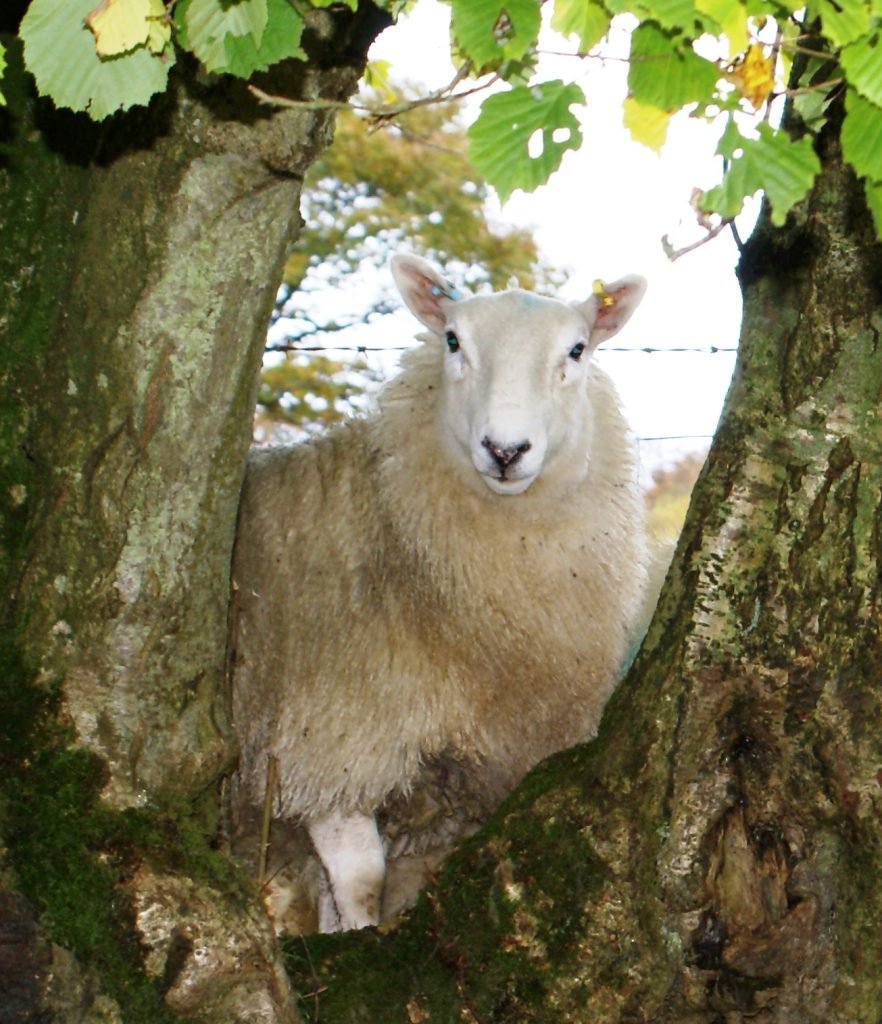 I was a bit too young for it to be called a full-blown spiritual crisis, but at the age of seven it was as traumatic as it could be.  It happened in school assembly, and it happened more than once.  In England, public schools are required to hold a daily act of worship, and so at the morning school assembly we would have a prayer, a gentle little message about God or morality, delivered by a teacher who may or may not have believed in God and who may or may not have had any kind of morality, you should have seen my teachers, and we’d sing a hymn.  And it was the hymn that caused my spiritual crisis.  One hymn in particular, and we seemed to sing it every couple of weeks.

And in that one troublesome hymn, there was one deeply distressing line that was the cause of my existential crisis.  And there is no existential crisis like the existential crisis of a seven-year-old.  It was a setting of Psalm 23, and the line that gave me my dark night of the soul was the first.  ‘The Lord’s my Shepherd I’ll not want’.  Now, I’m seven, right.  I don’t know a lot about English grammar, and I know even less about the seventeenth century language of the King James Bible which of course was the source of this hymn.  So, when I heard ‘The Lord’s my Shepherd I’ll not want’, I failed to notice the semicolon after ‘shepherd’.  The tune didn’t help either.  There is absolutely no pause between ‘shepherd’ and ‘I’ll’.  The words just ran together: The Lord’s my shepherd-I’ll not want.

So, in my seven-year-old brain I thought the meaning of the line was ‘The Lord is my shepherd that or whom I will not want.’  I mean, how else could you hear it?  Seriously, I can’t tell you how this messed me up.  When other kids were lying awake at night thinking about pop music or football, I’d be trying to fathom the nature of God – if God is good and kind and loving like the rest of the hymn says he is, why would I not want God?  The Lord is my shepherd I’ll not want – who wouldn’t want God if he lay you down in green pastures, made your cup run over, and ensure goodness and mercy shall follow you all the days of your life?  The Lord’s my shepherd I’ll not want?  Seriously, it was years before I read a translation of Psalm 23 that made it clear that because God is my shepherd, I will want for nothing, that I’ll lack nothing, that I’ll be complete, satisfied, full.  Now we’re talking.  That shepherd?  Yes, I’ll take that shepherd.  That shepherd I really do want.

And that shepherd, I really do need.  Because I’ve tried plenty of other things and although they may give me pleasure, they don’t give me contentment.  Although they give me fun, they don’t give me peace.  Although they make me laugh, they don’t make me safe.  Those things don’t answer the deep crisis in my soul.  They don’t tell me that I’m limitlessly loved and unconditionally desired.  They cannot be the source of my identity or the cause of my peace.  That’s not to pour cold water on those things – all of them are good and right and beautiful – I’m thinking of a meaningful career, warm friendships, true relationships, good health, stimulating hobbies and pastimes, money, and the things it can buy.  These are God’s gifts.  But we can’t expect them to fill us, satisfy us, complete us, shepherd us the way our creator can.

The pandemic has taught us many, many things.  Whole volumes of truth.  One of the most important is our sheeplikeness – our vulnerability.  All it took was something so small we can’t even see it, and so inevitable that it was bound to happen one day, to show us what little power we human beings actually have.  Something you can’t even see without a microscope but it devastated the human race.  We are sheep needing a shepherd.

I used to love the Hans Christian Andersen story The Emperor’s New Clothes.  When I was small, I had a wonderful edition of it.  Like all good children’s books, it was made memorable by the pictures.  And like all good children’s books it demanded to be read every day for months.  I used to love the humbling of the emperor, so full of himself that a little piece of flattery by two conmen could persuade him to believe in a set of clothes that didn’t exist.  And how I would giggle at the last picture of the book – the pompous emperor striding grandly through the streets wearing just his crown and his underwear.

Andersen published that story in 1837.  But it is weirdly modern, and if you wanted to compare today’s Western world with a character in a fairy tale, you could probably not pick a better one than this narcissistic emperor.  It took a lot to show us the foolishness of our pride.  It took the pandemic to reveal the dark horror that we’re not in control.  But if we could receive this revelation as a gift, if we would embrace it as a liberating grace, then we would be profoundly changed.  Our self-image, our pride, our false sense of security would all be exposed – they are the emperor’s new clothes.  And so, we try to pretend like it was nothing, a temporary blip, a momentary dip in our ever-upward trajectory.

The pandemic, though, is different.  It refused to go away after a few weeks.  13 months after restrictions were imposed, we still are not in charge and we may never be.  If you have not felt out of control in the last year, then you probably don’t get it.   We’re armed to the teeth, but all the nuclear warheads in the world can’t protect us against biology.  All the economic expertise of a sophisticated nation is not powerful enough to prevent millions of people being thrown into poverty by something we can’t even see.

But along with this vivid and lethal vision of our helplessness against outside forces, we have been rocked by dark inner truths – we’ve seen repeatedly that we have no power over our human natures.  The capacity of the human heart to perform acts of evil still shocks us.  It shouldn’t.  After the blood bath of the twentieth century, we should know by now that we have a magical ability to mess things up.  In the last year, we have been shocked to discover what happens when a society has allowed itself to fracture into alienation – without common values or even a common understanding of what is true.   All the collected wisdom of centuries of democracy is powerless in the face of human resentment, fear, and hate.  And we’ve learned that human depravity is not just confined to fists flying, boots kicking and weapons firing, but also in the seemingly mundane, emotionless, calm application of a knee to a neck for 9.5 minutes.  If you have made it through the last twelve months with your faith in human nature intact, you’ve not been paying attention.

We need a shepherd.  We’re born with fatal flaws.  We organize our lives to limit the risk of accidents, but we have no power over the laws of nature or the actions of other people.  We can predict the weather, but we can’t control it.  We understand how earthquakes happen, but we cannot prevent them.  We can prolong life, but we can’t avoid death.  We can create wealth but are unable to manage it so that everyone on earth has enough.  We can split the atom, but we are powerless to resist the urge to apply that knowledge in a way that can destroy the globe.  There’s so much we can do, and yet we remain powerless to change ourselves.  We can conquer space but not our hearts.  We can tame all kinds of animals, but not our tongues.  We perform heroic deeds of sacrifice and love, but also act with unspeakable cruelty.

I don’t want to leave you this morning with a sense of heaviness or guilt.  Because our frailty is not the last word.  The last word is grace.  The final message is hope.  The ultimate syllable bellowed throughout creation is love.  The Lord is our shepherd, and we shall lack nothing, even if we have to be stripped of so much before we can see clearly what’s important.  So, let’s take a stroll through green pastures, beside still waters.  Let’s have our souls revived and guided along right pathways.  There is hope for us, there is a future because of our shepherd.  Let us take courage that we can walk through the valley of the shadow of death and fear no evil.  Let’s sit at table, have our heads anointed with oil and watch as our cups are filled to overflowing.  Let us do this because the Lord is our shepherd.  We shall not be in want.  He is with us.  His rod and his staff comfort us.  Surely goodness and mercy, like two little dogs, shall follow us all the days of our lives, and, as if all that wasn’t enough, we will dwell in the house of the Lord forever.

I saw it this week in the Dallas Convention Center, which is the temporary home for thousands of teenage boys who have walked literally through many valleys, in the shadow of death, poverty, and violence.  2,500 miles of walking though valleys, and over hills and through all types of torrid terrain, to get to these United States.  I saw boys from Nicaragua, Panama, El Salvador, Honduras, and Guatemala lying on their cots reading Bibles.  I saw some in a group listening to a Bible teacher while they followed in their own copies.  Now there is good news.  There is the Good Shepherd.  There is the one who has guided protected, and led to safety, a new start, a future.