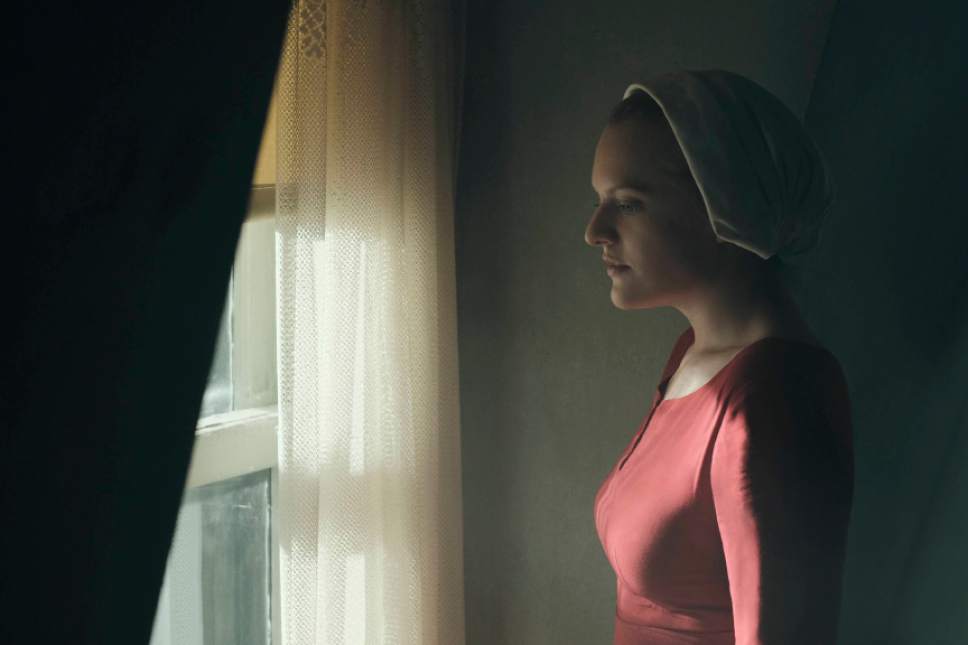 From Eden to Egypt 3: The Handmaid’s Tale

From Eden to Egypt: 3

Hands up if you have ever heard a sermon on Hagar.  I thought as much.  No one.  Hands up if you don’t know a single thing about Hagar.   Hands up if before N just read the Old Testament lesson, you had never even heard of Hagar.  Don’t be shy.  This is a no shame zone – I am the only person who can see you.  And hands up if, now you have made the effort to get out of bed and flop onto the sofa in front of the TV with a coffee, you are exited to learn something about a little-known Bible character?  If it’s any comfort, I’ve never heard a sermon on her, either – and she is a her, in case that wasn’t obvious from the reading.

Here’s a story for you.  It’s a love story.  But also a hate story.  A story of rejection, but a story of acceptance, of bitterness but of redemption…  Boy meets Girl.  Boy and Girl marry.  Boy and Girl cannot have children.  Boy is rich.  Boy has servants.  Girl has a maid.  Girl longs for a child.  Boy, too, yearns for a dynasty he believes is his destiny.  Girl tells Boy to sleep with her maid to produce an heir.  Boy does.  Maid delivers a son.  Boy is pleased.  Girl is jealous.  Maid is exploited.  Girl miraculously conceives.  Girl gives birth to a son.  Girl is delirious.  Boy is over the moon.  Maid is nervous.  Maid is a good mother.  Maid’s son and Girl’s son grow up together.  Girl regrets telling Boy to sleep with Maid.  Girl is resentful, and murderously spiteful.  Boy feels stuck in the middle.  Boy tries to do the right thing by Girl, by Maid, and by his two sons.  Boy is hopelessly conflicted.  Maid is scared.  Girl tells Boy that he should kick Maid and son out of their home.  Boy agrees.  Maid and son are driven into the desert.

Welcome, not to the Handmaid’s Tale, but the soap opera that is family life in Genesis.  Like all good soap operas it features wealthy, beautiful people, betrayal, scheming, death threats, and plenty of shocking bedroom activity.  The boy is Abraham, the girl is Sarah, and their son is Isaac.  We met them last week in part 2 of our Summer Sermon Series, From Eden to Egypt.  Today we meet the rejected maid, Hagar, and her son is Ishmael.

If you’ve ever been rejected (and who hasn’t?) it will come as a huge relief to know that we are in exalted company.  Jia Jiang loves rejection.  He is a rejection therapist.  Yup, a rejection therapist.  He recommends that people try to get rejected at least one hundred times a year.  It will help you develop emotional intelligence, he says, and painful though rejection is, I think he’s probably right.  Listen to this roll call of great writers who had manuscripts tossed in the trash by publishers.   F. Scott Fitzgerald, Dr Seuss, Stephen King, JK Rowling, William Golding, John Grisham, James Joyce, Ernest Hemingway, George Orwell, Emily Dickinson, Agatha Christie, Jack London, Sylvia Plath, and Edgar Allen Poe.  One publisher even said to Fitzgerald, “You’d have a decent book if you’d get rid of that Gatsby character.”

History focuses on the winners.  Abraham and Sarah are winners.  God chose them to be the father and mother of a vast and precious nation – God’s Covenant people.  But today we are forced to listen to another story – not one of covenant but exclusion, not one of grace but rejection.  It’s why you’ve never heard a sermon on Hagar before.  Hagar, the slave, the powerless, the foreigner, the piece of property.  Throughout her story she has no control over her life.  She never makes any decisions.  She is impregnated without her consent.  She is merely an incubator for Abraham’s baby.  When her owner, Sarah, is overwhelmed by resentment Hagar is evicted from the family without even being consulted.  She is lost in the greatness of Abraham and Sarah, and her son Ishmael grows up in the shadow of Isaac – the true inheritor of God’s Covenant.  How right was Mother Theresa when she said, “Being unwanted, unloved, uncared for, forgotten by everybody, I think that is a much greater hunger, a much greater poverty than the person who has nothing to eat … Loneliness is the most terrible poverty.”

In our journey from Eden to Egypt, there are few more heartbreaking legs than this.  Hagar and Ishmael are in the desert, they’ve used up all their water.  Death for both is certain.  Hagar cannot bear to watch her child die and so she lays Ishmael under a bush and walks away, to die her own death.

Wait, wait, wait.  Let’s get this clear – the Abraham and Sarah who are the mother and father of the three great monotheistic faiths – Judaism, Islam, and Christianity; the Abraham and Sarah the New Testament describes as the founders of faith, expel a young woman and her child into the wilderness to die.  As anyone who has researched their genealogy knows, we all have a horse-thief or two among our ancestries.  But we, the household of faith, have worse than mere horse thieves.  We have murderers – of mothers and infants.

And so Hagar goes maybe a hundred yards away from Ishmael and falls to the sand and weeps.   And a soft desert breeze makes the sand rustle and through its sound Hagar hears a voice – of calm compassion. “’What troubles you, Hagar? Do not be afraid; for God has heard the voice of the boy. Come, lift up the boy and hold him fast with your hand, for I will make a great nation of him.’  Then God opened her eyes and she saw a well of water.  She went, and filled the skin with water, and gave the boy a drink.”

The grace of God is more powerful than the resentment of Sarah and the cowardice of Abraham.

I love the way Frederick Buechner sums up this story.  “The story of Hagar is the story of how in the midst of the whole unseemly affair the Lord, half tipsy with compassion, went around making marvelous promises and loving everybody and creating great nations like the last of the big-time spenders handing out hundred-dollar bills.”  I’ve never pictured God as the Monopoly Guy before.  But, here are people doing seriously wicked things – sending a mother and child into the desert to face certain death, and just when you’d think God should get angry and do some smiting, at least a bolt of lightning on Abraham’s tent, or an outbreak of rabies among his camels, he does the unexpected.  He saves, preserves, and blesses, and he includes in his blessing even those whose intentions were evil.

Maid meets God.  Maid’s son meets God.  God becomes friend of outcast and reject.  The God of Abraham, Isaac, and Jacob is also the God of the outcast, the reject, the alien.  The outcast becomes the father of a great nation.  The reject becomes a source of blessing for the world.

There is a legend that goes like this. Judas, after he had betrayed Jesus, found himself at the bottom of a deep abyss. He lay there for a couple of centuries and then slowly began to stir and sit up. Looking up, he saw a faint light at the surface, miles above. He began to climb. Sometimes he would slip and fall back and spend a century or so regaining lost ground. Sometimes he rested. But he kept climbing. As he climbed the light seemed to grow stronger, to glow more brightly. It seemed to energize him and to call to him. He kept climbing, his limbs gaining strength the closer he came to the light. After a couple of millennia, he reached the top, his hands and body scraped and fatigued from the climb.  When he hauled himself up, his muscles shaking with the effort, he found himself in an Upper Room where a young rabbi was having supper with his friends. The young rabbi turned and greeted Judas, his face glowing with pleasure, “Judas, welcome home! We have been waiting for you. We could not continue the supper without you!”

I quote that story not because I agree with it.  I’m not sure I do.  In fact, I don’t really know what to make of it.  I read it a few months ago and cut and paste it into a Word doc knowing that one day it would come in handy in a sermon, and today happens to be that day.  But it is a shocking story, isn’t it?  It nauseates me slightly because it challenges the traditional view of Judas and could be seen as undermining the severity of his betrayal of Christ.  But more than that, it shocks me because it makes me realize that God will not let sin win.  He will take even the very worst of evils performed by human beings and turn them into opportunities for goodness.  He will take the cruel eviction of a mother and child into the desert to face certain death, and use it to found a nation that blesses the world.  He will take my selfish actions and somehow, despite my goatish motives, use those broken shards to build something splendid.  Hear the Word of the Lord – the God of outcasts and rejects, the God of haters and murderers.  Are you tired of the spite?  Are you sick of the rage?  Are you fed up with the whole rotten world of anger and prejudice and utter depraved disinterest, where human life is so cheap, where in a list of priorities it comes somewhere below property and comfort?  Take heart.  God will take those things that make us despair and use them as the raw materials for his work.  Be of good courage.  Sin won’t win.  The Kingdom will come.