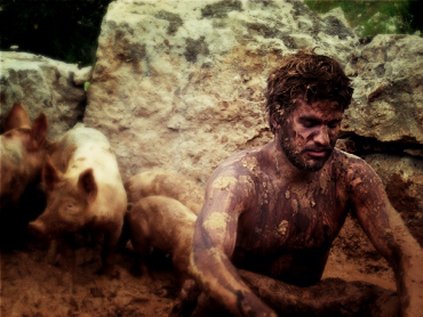 The Parable of the Unfair Dad

I get some of my best sermon material from supermarket checkout lines, and sure enough, on Tuesday I was standing at the checkout in Stop and Shop when I overheard the most extraordinary conversation.  There were two mums talking and one of them said, “My daughter’s tooth fell out and the Tooth Fairy left her $10.”  And I thought, “$10?  Have Westfield kids organized and done some collective bargaining or something, or has the tooth fairy gone soft?”  And I couldn’t help myself, I said to one of the mums, “The tooth fairy left $10?  Really?”  And the checkout operator joined in, “When I was a kid…”  That’s the problem with people like me.  We can resent people’s generosity.

It wasn’t the smell that made him want to throw up.  But that was bad enough.  The nauseating whiff of pigs.  And it wasn’t the sight of him that made him want to heave – that dirt ingrained in his face, embedded beneath his fingernails, matted in his hair.  And neither was it those ragamuffin clothes, fit only for the bonfire, that made him gag.  It wasn’t even the shocking knowledge that beneath the rags and the aroma of goodness-knows-what, stooped the skeletal frame of his little brother.  No, it was none of these assaults on the senses that caused his belly to contort.  It was the reaction of his father.  That’s what disgusted him.

His father.  A good man.  Too good, the older brother thought.  Softer than the tooth fairy.  That was his problem.  Always being taken in – by beggars faking poverty, healthy people pretending to be sick, staff playing hooky.  Sure, he possessed a good heart – an infuriatingly good heart, but he was a sucker, a victim to the sob-stories of the undeserving.

He loved his dad, he really did.  And that is what made him so angry when that ungrateful little brother asked for his share of the inheritance and left for the big city, where he partied it away.  How could he – the self-centered brat.  But the older brother knew it couldn’t last.  His loser sibling would be back, as soon dad’s money ran out.  He’d come whimpering home, pretending to be sorry for the disrespect he had shown, weeping crocodile tears, spinning some story about how he had worked hard but been let down by his friends, manipulating his father’s good soul, tugging on those huge heart-strings.  And now, as predicted, the waster was home.

And there’s dad, just as the obedient son had forecast, arms open wide, running, RUNNING IF YOU PLEASE, to greet the Loser.  That’s when the big brother started feeling queasy.  The sheer foolishness of his father.  And now, he’s not just welcoming him home, he’s ordering a robe, a new pair of shoes, a ring, and a feast?  The older son, the good son, the respectable son, was enraged, repulsed.  O, the injustice of it all.  What about him?  He was mature.  He took responsibility for himself.  He honored his father.  He’d never disobeyed him, disrespected him, disappointed him.  But what reward did he get?  Certainly not the fatted calf.  Not even a goat to share with his friends.  And now he’s supposed to go the party and fake joy that the bum has come home.  Party?  Out of my way.  He stays outside and sulks at the unfairness of it all.

In Luke chapter 15 Jesus tells three stories of lost things.  A lost coin, a lost sheep, and a lost son.  Now, Christians for 2000 years have seen the thread of lostness running through these parables and have concluded that the lost son is the kid who ran away, wasted his father’s money, and ended up working for pea pods in a pigsty.  But what if we have been reading it wrong?  What if the lost son is not the runaway, but the stay-at-home; not the lad who reeked of swine, but the one who smelled of apple pie?

Because the older brother in Jesus’ story of the Lost or Prodigal Son is one of the most miserable characters in all his parables.  Here’s a young man who has everything yet thinks he has nothing;  who enjoys the constant presence and goodness of a loving parent, but resists sharing it with anyone he considers undeserving; who is so captive to justice he has no room for mercy; who enjoys the freedom of being the heir of a grand household, yet is trapped inside a demonic prison cell named ‘resentment’.  The fatted calf and the older brother.  One of them lost everything in this story, and faced a short, bleak future.  The other had four legs and mooed.

Henri Nouwen, one of the great spiritual writers of our time describes the “lostness” of both sons in the parable.  “Did you ever notice how lost you are when you are resentful?  It’s a very deep lostness.  The younger son gets lost in a much more spectacular way — giving in to his lust and his greed, using women, playing poker, and losing his money.  His wrongdoing is very clear-cut.  He knows it and everybody else does, too.  But he can come back, and he can be forgiven.  The problem with resentment is that it is not so clear-cut: It’s not spectacular.  It is not overt, and it can be covered by the appearance of a holy life.  Resentment is so pernicious because it sits very deep in you, in your heart, in your bones, and in your flesh, and often you don’t even know it is there.  You think you’re so good.  But in fact, you are lost in a very profound way.”

But the older brother does have a point.  That’s the thing about resentment.  It is understandable, it is based on facts and a solid foundation of right and wrong.  It stands proudly on the moral high-ground – a fortress it deserves to occupy.  Things in the topsy-turvy household of this parable are patently unfair.  The younger sibling has messed up, he has broken their father’s heart, he has been ungrateful and self-absorbed.  Dad is sickeningly unjust.  Let me ask you: are you OK with that?  I’m just wondering, because sometimes I’m not.  I want God to see my good deeds and reward me.  I want him to notice me doing the right thing, and bless me accordingly.  And I fret about the sins of others, and I think that God should not accept them with the same open arms that embrace me.

How do you feel about attending a party thrown by an unfair God?  Because that is the God and Father of Jesus.  Is this the Parable of the Lost Son, or the Unfair Dad?  God does not treat people the way they deserve.  He loves the haters; he adores the spiteful, welcomes the violent, opens his arms to the immoral, the greedy, the seedy.  He stands on the top of his house and gazes longingly, desperately, eternally at the horizon, pining for the evil-doer.  And then when he sees a human figure appear in the far distance, he picks up the hem of his robe and he runs.  And he nauseates the self-righteous.

There have been a lot of younger brothers in the history of the church.  People like John Newton – an English slave trader who worked the Devil’s Triangle, seizing human beings in West Africa and hauling them across the Atlantic, where he sold them, along with his soul, to cotton growers and rum distillers.  But that soul was bought back, and in 1755 Newton was ordained an Anglican priest.  His most dearly loved gift to the world is his story of the Christ who paid the price to buy back his soul.  “Amazing grace, how sweet the sound that saved a wretch like me.  I once was lost but now I’m found, was blind but now I see.”  I used to have a pair of shoes.  I called them my miracle shoes because I bought them in a shoe shop in the small English village of Olney in Buckinghamshire.  That shop was directly across the street from the parish church where Newton had been vicar, and where he wrote that hymn.

And there are also plenty of older sons in church history.  Take St. Teresa of Avila.  She was a good girl.  She never left her Father’s home.  She went into a convent at an early age and took on a life of austere discipline, spending several hours a day in prayer.  Teresa did not need God to forgive her past.  She didn’t have a past.  Teresa was a good girl.  Then in her mid-40’s she noticed with fresh eyes a painting of Jesus being whipped before his crucifixion.  She was overcome with agony – a bombshell that devastated her religious facade – the horror that Christ had endured this torture and death for her.  This was a transforming moment.  Teresa was a good girl.  She had never run out on God, never lived it up in the city or slummed it in the pigsty, but neither had she ever truly opened her heart to the love of God until that moment.

Jesus’ parable ends with the father pleading with the older son to come to the party.  And Jesus, master of suspense, doesn’t finish the story.  Does the man let go of his resentment and join the party, or cling to his it and stay outside?  I think I know why Jesus didn’t end the story.  He was waiting.  2000 years.  For this moment – for you and me to write it.  So, how does the story end?  We good faithful church-goers.  Our father is pleading.  Do we stay in our rooms, punching our pillows, waving our fists at a sickening God, resenting the sounds of laughter and the aroma of roast veal wafting up the stairs?  In a world of grace, where God refuses to play fair, this parable forces us to make a choice.

Want to know a secret?  It’s only when we realize that we too depend on the mercy of God, that our resentment will fade.  As long as we are protesting that we are more holy, more moral, more doctrinally pure than others we reject the invitation to the party.  It’s when we celebrate the unfairness of God and confess that we need it just as much as the younger rebel that we can go to the party, free of resentment, free of misery, free of nausea, and enjoy the feast.  Thanks be to God for his indescribable unfairness – this God of wasteful sons and stuck-up siblings.  Without him, we would be truly sick.  Don’t judge the tooth fairy.  Come to the party.