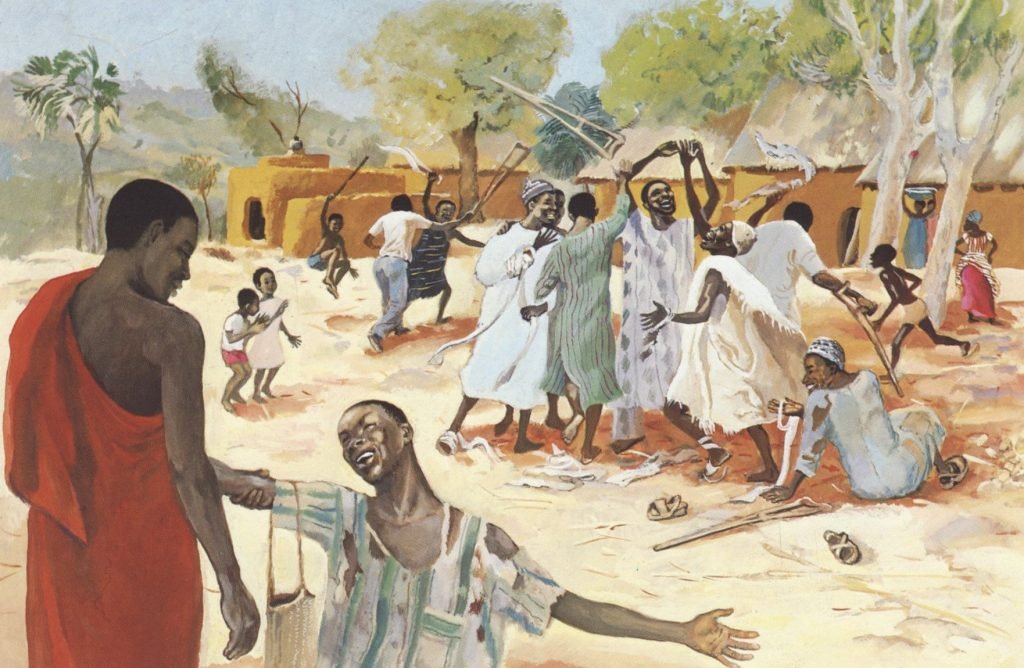 When it opened in theatres in 1979 it came in for severe criticism.  Shock and outrage was the usual response from the God-fearing Christians who picketed cinemas. So provocative was this film that 39 local authorities in the UK banned it, as did the entire Irish Republic and Norway.  The main allegation against the filmmakers was blasphemy.  My personal view is that it skates on thin ice a couple of times, but there are parts of it that preachers could use to illustrate God’s truth in powerful ways.  Yes, I am trying to justify starting this sermon with a quote from Monty Python’s Life of Brian.  So here goes.  Brian is walking through town, and he passes a man begging.  And the man calls out, “Alms for an ex-leper.  Alms for an ex-leper.”

And Brian stops and says: “What do you mean, an ex-leper?”

And the man replies: “Well, I was cured.”

“Who cured you?” Brian asks.

“That Jesus fellow.” He says: “Now I have a hard time making a living; all I’ve ever known to do is beg.”

And Brian asks: “Well why don’t you go back and ask him to make you a leper again?”

And he answers: “Well, I might not like that.  Maybe he could just make me a leper during working hours.”

And Brian mutters: “Some people are never satisfied.”

To which the man replies: “That’s just what Jesus said!”

In this morning’s gospel reading we almost see that same event from another angle.  Jesus is passing along the border between Galilee and Samaria, and ten people suffering from leprosy come out to shout at him.  They have to shout because no one with that disease is permitted to have contact with non-sufferers.  They must remain several yards apart.  Lepers are cast out of their towns.  They are removed to designated villages, where they suffer and eventually die with just the company of their fellow-patients.  They are quarantined from their families, their livelihoods, and the eyes of normal society.

How desperate must these ten sufferers be when they call out, “Jesus, Master, have mercy on us!”  And how thankful are they when Jesus heals them?  How eternally, passionately, wholeheartedly grateful must they be?  Well, as it turns out, not much.  Just one of them shows gratitude for this life-restoring gift.  That patient is interesting.  But I find the other nine even more so.  What happened to them?

If Jesus came to Union County, what would happen?  If Jesus performed miracles for people, what would result?  If God were to reach down and transform lives, restore hope, release, and bless, and give, how would you respond?  You’d surely be the one grateful person returning to say, ‘Thank you’.  Of course you would – because you’re here this morning.  Today you had enough gratitude in your heart for what God has done that you left what you were doing and came here to give God thanks and praise.  God has lavished good things on you, you have noticed, and you want to express your gratitude.

But if that is where we are now, maybe we can think about where we have been in our journey of faith.  I remember times when I was not in the place of gratitude.  These were the times in my life when faith was difficult.  Sometimes there were important things happening and I felt the need to push God to the margins so I could focus on that project, that person, that problem.  Other times I couldn’t see God’s goodness, not because he was NOT good, and not that he stopped pouring his gifts into my life, but I was distracted by other things – pain, grief, loss, anger, anxiety, guilt, even happiness and success.  That’s when I’ve taken my eyes off what I have and fixed them on what I don’t have – and I’ve grumbled.  And so I’ve been thinking about the nine ingrates and their motives.   Now, I want to be charitable to them, because I see myself there.  I have hope for them, that even though they didn’t come back and thank Jesus that day, maybe they did later.  They were not evil people, just distracted.

Patient Number One doesn’t want to jump to conclusions.  He waits to see if the healing is real.  Maybe give it a few days and see if his leprosy returns.  Patient Number One is cautious, he keeps his feet on the ground, and reserves judgment until all the evidence is in.  Some people call him a cynic, he prefers to think of himself as thoughtful and balanced.  Maybe in a few weeks he’ll come to believe that his healing is genuine and permanent, and then he’ll find Jesus and thank him.  Do you know any ones?

Patient number Two knows a thing or two about medicine.  She knows that leprosy is incurable and fatal.  She knows it doesn’t just go away.  So, she concludes what any reasonable person would conclude.  That she had never had actual leprosy in the first place.  She’s been misdiagnosed.  And so, there is no reason to thank Jesus.  There is no miracle here, all there is is medical error.  Some might call her a skeptic, but she is happier with the word ‘realistic’.  Do you know any twos?

Patient Number Three is a very busy woman.  She has a life to get on with.  It has been years since she’d spent time with her husband or embraced her kids.  She is now free.  She needs to go home and hug her family; she needs to run through the street and shout out that she is healed.  She needs to get with her friends and celebrate.  She wants to thank Jesus – after all, he has literally given her back her life.  And she will when she sees him next.  He’s bound to come back this way soon, and when he does she’ll make a special effort to go out thank him for what he’s done.  People call her impetuous, but she prefers to see herself as living passionately in the moment.  Do you know any threes?

Before he became ill, Patient Number Four was a successful man.  He worked hard, took risks, made sacrifices.  He created a good life for himself.  He deserves God’s blessing, he reasons.  He obeys the rules, takes responsibility for himself, refuses handouts and leg-ups.  And now God is rewarding him.  He is healed because he deserves to be.  (And by implication, those who are not healed do not deserve to be.)  Some people say he’s steeped in the sin of pride.  He calls himself a self-made man.  Is four your number?

Patient Number Five is full of thanks – to the priests.  It is they who have healed him, he concludes.  He did as he was told by Jesus.  He went to the priests to show them his healed body and receive their clearance to return to normal life, and he was healed.  So, he thanks them, falls on his knees and pledges them his love.  It is clear that this patient has good motives – he feels the need to give thanks for his healing; but some people who know him say he has trouble recognizing God when he shows up in his life.  Is five your number?

Patient Number Six is a strong believer in her own power to control her destiny.  She  believes that with a positive attitude and rock-solid self-confidence there is nothing she cannot achieve.  As long as she keeps believing in herself she can do anything.  And now because of her self-belief she had healed herself of leprosy.  Some accuse her of narcissism, but she thinks of herself as confident and resourceful.  Is six your number?

Patient Number Seven runs back to her old life.  She returns home to greet her neighbors and family and then she plans to come back to thank Jesus.  Except that when she gets home things are not the way she expects.  Her family have adjusted to her absence, her neighbors are not that overjoyed to see her, she faces problems she didn’t anticipate, new and unforeseen challenges.  Number 7 is disillusioned.  So much so that she never does go back and find Jesus.  Instead she shakes her fist at God, she pouts and ruminates on how terrible her life is, and how much better things were when she had leprosy.  Back then she was happy.  She had friends in the quarantine village.  Why should she thank God for this?  God has failed her.  Oh, don’t be a seven.

Patient Number Eight would go back to thank Jesus, but things are tricky.  Her family has never liked organized religion, which they think is all about money and power.  Number 8 is grateful to God for her healing, really, but if she were to go and find Jesus and thank him it might cause trouble in the family.  They might think Number 8 has gone weird, that she’s been radicalized in that quarantine colony, that the leprosy has affected her brain and now she is losing her mind.  Thanking Jesus might cause problems.  Best keep her head down.  Please don’t be an eight.

And then there is Patient Number Nine.  He knows he is healed, and knows it is Jesus who has done it.  He wants to return and look him in the eye, and kneel at his feet and worship.  He really does, but inside him lurks a crippling suspicion that he is too bad a sinner for Jesus.  “Jesus didn’t know what I’m like when he healed me.  It he had he surely wouldn’t have performed me a miracle.”  He fears that God will judge him, cast him away, rebuke him for his moral failures.  If only Number 9 could know deep down that this Christ who healed him did so out of love.  If only he could see that the Jesus who took away his illness also wants to take away his shame.  Please don’t be a nine.  Please don’t walk away from God because you think you’re not worthy.  If Christ thinks you are worth leaving heaven for – and dying for, then who are you to disagree?

Of course, we could seal the deal of the heal, and return to Christ and give thanks.  We could soar above the distracted hearts and the earth-bound minds and reach the heights of heaven.  We could open our eyes and truly see what God has done, and fall down in worship.  We could be a ten, and not just say ‘thank you’ to God but respond to his gifts by passing them on and blessing the world.  Be a ten.