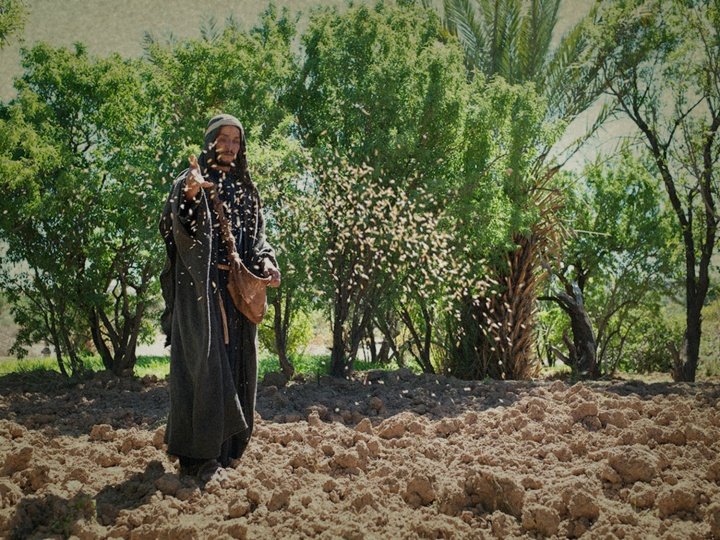 It’s about an inch long, a brownish color, and bears the dignified name of Methuselah.  And it is really, really old.  It is so old, I can’t even tell you how old it is.  Actually, I can.  According to carbon dating it is around 2,000 years old.  Methuselah was discovered in 2014 in the remains of King Herod’s winter palace overlooking the Dead Sea.  Methuselah has slumbered, tucked tightly into the crevice of a rock, biding its time, refusing to die, holding onto life in its cool, dry niche, waiting for the day when it would become world famous, and break whatever world record exits for things living in the crevice of a rock.  Methuselah, if you haven’t guessed by now, is a seed.  A date seed.  But this date was more than a one-night stand, and Israeli researchers have now grown Methuselah into a sapling.  And there it is, this strapping youngster who has actually been around, in some form since the time of Christ.

It must be an awesome experience to hold in your hand a living thing that was present at the time and in the place where Jesus lived.  Imagine the stories that seed could tell.  Stories of empires, invasions, kings, heroes, and a man who told even greater stories of lost coins and wayward sons, of loving shepherds and precious treasure.  If Methuselah could talk it might recall that day when the story-teller elevated seedkind for all time, making it the star of a story.  Yes, one day Methuselah may produce a crop of juicy dates to delight the sweet tooth of a diner, but Methuselah’s species never made it into one of Jesus’ parables.  Not like the mustard seed.

I can’t tell you how small a black mustard seed is.  Actually, I can.  750 of them weigh one gram.  You would need thousands if you were to get to the same weight as Methuselah.  Now Jesus knew his mustard.  There are actually two kinds of mustard that Jesus and his hearers knew about.  One kind was wild.  Charnock it was called.  And it was a nuisance.  When Charnock settled into the soil it was almost impossible to get rid of; it would mug other plants and rob them of sun and nutrients.  Mustard was the bully that pushes its way to the front of the lunch line and helps itself to all the desserts.  Left unchecked the mustard plant grows to maybe ten feet in height.

This tiny almost microscopic life-force is, says Jesus, the Kingdom of God – the rule of God, the place where God’s passions and imaginings and dreams come to reality.  It starts small.  So small you wonder if it is even there at times, it is so insignificant compared to the other things that are growing in the field that is your life or your community, or your nation or your world.  There have been times when I have seen so little evidence of God in my life that I have doubted if I was truly a follower of Jesus.  In fact, in my teens, I used to wake up in the night and worry.  Was I truly a Christian?  What would happen if I died, would God accept me?  How can I be a disciple of Jesus if I’m still sinning?  And then I gradually came to learn that my security in God’s heart is not determined by my performance but by his love.  I lightened up; I learned that God takes me just as I am, and that I don’t need to impress him.  There’s an amazing secret you discover when you truly start to believe in the grace of God – you begin to change.  God’s Kingdom grows in you, your character and your conduct are slowly shaped not because you gritted your teeth and tried to be perfect, but because you accepted God’s unconditional love.

The Kingdom of God is within you.  Says Jesus.  Can you feel it?  The Holy Spirit has planted inside you God’s Kingdom.  Can you see it?  O, it might be still so tiny that you sometimes wonder if it is really there.  It might be competing for attention and fighting so many other life-forms in your heart that sometimes fear it may have been strangled and crushed by more dominant shoots.  But say what you like about God, that omniscience thing means he is a great judge of character, and he’s chosen you.  He chose you before you chose him.  He sees you as you are now, but he also sees you as you will become.  He knows your potential, even if you don’t.  God sees you in the future doing things that you can’t even imagine right now.  That is the mustard seed.  You can’t get rid of it.  There’s no alternative.  You may as well just throw in the towel and accept that your life is going to become more and more like the life of Jesus.  May as well give up struggling for control of your world and accept the inevitable – God’s Kingdom will grow within you.  Like that unruly wild mustard plant, it will expand and overwhelm those other things that seem to you to be more powerful – that bad temper, that proud thinking, those habits or ways of talking that you don’t like but that seem to get the better of you – all those things will be crowded out by this wild and unruly kingdom that will grow and grow within you.  I suppose this isn’t 100% inevitable.  If you really want to resist God working in your life, you can.  If you must take a chainsaw to the mustard bush then God gives you the choice, I suppose.  But why would you, when God wants to make you into a new and even better you?

There’s another seed in this Gospel lesson – an unnamed, invisible seed.  It is planted and left to take its natural course.  It grows secretly, out of sight; you wouldn’t even know it was there.  And Jesus says this is how it is with the kingdom of God.  It grows quietly, but steadily, until, like the mustard seed, it takes over everything.

There was a time when I did not like the secret seed.  I didn’t want the secret seed.  I preferred a loud and showy seed.  I believed that if God’s rule was going to be ushered in, it depended on me and my work.  No time to wait for God.  We must do it ourselves and do it now.  What’s more, God’s rule had to be brought in, not just by the church, but it must be imposed by governments, corporations, any body of people that had any sort of influence.  I did not want to accept that God’s kingdom grows quietly, out of sight, and on the margins.  This secret seed challenges me.  I didn’t like Jesus’ statement to Pilate that his kingdom was not of this world.  I’m from a country where Christianity was legislated for.  There’s an established church.  Until very recently, Christianity enjoyed unique advantages that other religions, philosophies, or community organizations did not have, and this was enshrined in the laws of the nation.  When I was ordained, I took an oath to the queen.  An example that sounds unbelievable in the US is that Anglican bishops in England sit, unelected, in the upper chamber of the legislature.  Imagine church leaders being appointed, unelected, to the US Senate.  I was living in the tragic shadow of the old idea that the job of government was to embrace the faith, to promote it, and to impose it on national life.  That is not the secret seed.

Sowing the secret seed is the job of the church, not the job of government.  And history shows in tragic agony that when governments try to do the church’s work for them, everyone suffers – the state and the church.  And yet, still, despite many centuries of painful experience to reflect on and learn from, many Christians are uncomfortable with the secret seed.  They seek worldly power for Christ’s church.  Churches may merge with political parties, trading their integrity for access to power.  The lesson of history is clear – God’s kingdom grows at its fastest when it is powerless.  The secret seed of God’s kingdom takes root and flourishes when the church performs its work on the margins, almost invisible, refusing to trade the gospel for a seat at the tables of the powerful.

The seed is underground, it is subversive.  The kingdom grows secretly, invisibly, but surely, until one day it fills the earth.  We can expect God’s Kingdom to grow in our neighborhoods, our state, nation, continent, and globe.  The New Testament writers expect and long for the day when God’s Kingdom will come in its fullness and fill all of creation.  The writer of Revelation sees that day as the dawn of a new age.  “Then I saw a new heaven and a new earth, for the first heaven and the first earth had passed away.  And I heard a loud voice from the throne saying, “Look! God’s dwelling place is now among the people, and he will dwell with them. They will be his people, and God himself will be with them and be their God. He will wipe every tear from their eyes. There will be no more death or mourning or crying or pain, for the old order of things has passed away.”  How about that for a vision of the Kingdom?  We long for it and pray for it – every time we pray the Lord’s Prayer.

But we also work for it.  Even though it is God’s Kingdom and not ours, and he decides where and when it is going to grow, we are the laborers in the field.  So we don’t just sit back and wait for God to act in some future moment in history, we are the farmers in the field that is his world.  We say, “Well, if one day there will be no more death or mourning or crying or pain, why can’t we strive to make these things a partial reality now?  So we work for justice, for reconciliation, for peace, for love, for healing.

This Kingdom is sometimes unwelcome.  Like the wild, unruly mustard plant, it flourishes even when people resist it.  It undermines our trust in material things and in human systems and ideas.  It is inconvenient and unpopular because it tells leaders there are more just ways of running society than on the principle of self-interest.  It challenges communities to accept that peace and equality are higher priorities than mutual suspicion and fear.  It dares to point to the shallow consumerism that surrounds us like a straitjacket and to declare that the emperor has no clothes.  This Kingdom is irresistible, unstoppable, and it’s in you, the follower of Christ.  So, dare we surrender to the plant within us that it might grow that little bit more?  And dare we leave this place and enter God’s mission field determined to join in where we see the Kingdom coming.  So that the birds of the air might find a home.