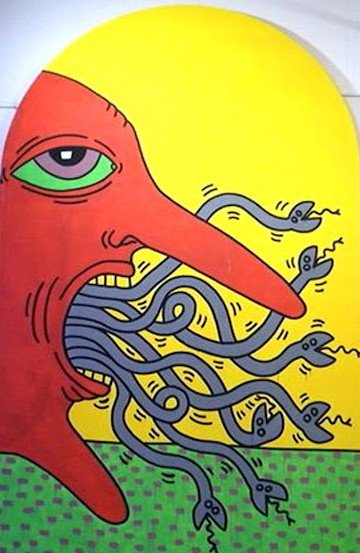 Spending four weeks visiting six European countries is an exhilarating experience, and Gelind and I are deeply grateful for the privilege of being able to travel this summer, when so many people have not been able to.  When you travel in Europe you come face to face with the beautiful, and often humorous, truth that travel creates all manner of opportunities for misunderstandings and cultural faux pas.  In Corsica we were blessed with a rental car called an Aiways.  It’s a Chinese electric crossover.  Now, I do speak a very little bit of French – enough to read a menu or to tell someone the time.  But even my pathetic knowledge of French was better than the English possessed by the clerk at the car rental desk at the airport.  So, she was trying to explain that she was giving us this electric car, but couldn’t tell me how to charge it, or even how to turn the engine off and on – which is a lot harder than it sounds, and resulted in us studying the handbook in a supermarket parking lot (turns out you don’t turn off the engine.)

Well, our Aiways was a headturner.  Everywhere we parked in Corsica people would congregate.  They would walk around it rubbing their chins and mumbling to each other.  One man came up to me to ask about it.  Sadly, his English was even less than the clerk’s at the car rental.  “Electrique?” he asked me.  “Oui, electrique,” I replied.  “Chinois?” he asked, clearly showing his knowledge of Chinese electric cars. “Oui, Chinois”, I reassured him.  And then he asked me, still in French, how many kilometers it did on one charge.  Getting a bit technical.  But I knew the answer.  380.  So I said in French “three hundred and “ before realizing that I had forgotten how to say ‘80’.  Nonetheless, he appeared very impressed with my answer of ‘three hundred and’.  Then he interviewed me about our vacation and where we were from, where we were going, he wished me a bon voyage and walked away, presumably to go to aiways.com to see how many euros it would cost him to buy one of their cars.  But for three or four minutes, we had a thing.  Even though he couldn’t speak a word of English, and I can barely rub together two words of French, there was this connection.  We smiled at each other, enjoying the solidarity that our mutual ignorance gave us.  His ‘bon voyage’ was truly heartfelt.  And I came to a fresh understanding of how unnecessary words can be.

Or as Lincoln said, “Better say nothing and be thought a fool than to speak and remove all doubt.”

Or as St James in today’s epistle says, “If we put bits into the mouths of horses, we can  guide their whole bodies. Or look at ships: though they are so large that it takes strong winds to drive them, they are guided by a very small rudder wherever the will of the pilot directs. So also, the tongue is a small member, yet it boasts of great exploits.  How great a forest is set ablaze by a small fire!  And the tongue is a fire. It is a world of iniquity; it stains the whole body, and sets on fire the cycle of nature.  Every species of beast and bird, of reptile and sea creature, can be tamed by the human species, but no one can tame the tongue—a restless evil, full of deadly poison.”  Yes, words are often unnecessary, but they are always powerful.  So, when you use them, says James, think about the power you’re wielding.  Words change lives.  Words shape destiny.  A single word uttered in an unguarded moment can end a career, as any broadcaster who has been caught in ‘hot mic’ moment can attest to.  A sentence yelled in five seconds of uncontrolled anger can end a relationship. An idea poorly phrased or badly translated can even lead to war.

Ollie Robinson knows.  He has probably slipped under your particular radar, but he created some news this summer that inflicted distress, soul-searching, and public debate in many countries around the world.  Robinson is a cricketer.  A good cricketer.  In fact, at the start of the summer he was selected to play for England’s national team.  He made his debut, and performed well enough to suggest that he would have a successful career at the top of his sport.  And then a couple of offensive Tweets were reported in that great British institution, the tabloid press.  The Tweets were, indeed, offensive and caused a lot of pain to many who read them.  They were reported as having been written by Robinson – a fact he did not dispute.  It led to a national debate in the UK.  Should Robinson be punished, even though he Tweeted the offensive remarks many years ago when he was a teenager and before he was a professional cricketer?  If so, what should the punishment be – should he be dropped from the national team for a time, was a fine appropriate?  The Government even became involved in the debate.  The Prime Minister made a public comment – which happened to be at complete odds with the remarks made by his Minister for Sport.

In the end, Robinson made a full and seemingly sincere public apology, he was suspended from the game for a short period, and made a successful return to the England team last month.  Of course, it’s not just elite sportsplayers who end up deeply regretting Tweets and Facebook posts.  I mention the case of Ollie Robinson, but I could have picked from a vast number of celebrities, entertainers, politicians, businesspeople, and others in public life who have been rightly embarrassed by offensive things they have said or written.  You may find the face of a particular celebrity floating through your mind right now.  And then there is the legion of regular folks who are not famous or rich who have destroyed friendships by thoughtless Facebook posts.

Which makes me suspect that if James were writing his letter today, instead of describing the power of the tongue to cause great harm or great good, he’d tell us about the power of the thumb.  “Look at ships: though they are so large that it takes strong winds to drive them, yet they are guided by a very small rudder wherever the will of the pilot directs. So also, the thumb is a small member, yet it boasts of great exploits.  How great a forest is set ablaze by a small fire!  And the thumb is a fire.  No one can tame the thumb —a restless evil, full of deadly poison.

I came across a mnemonic to help me keep a filter on my mouth.  It is in the form of THINK: T-H-I-N-K. Five question to ask myself before I speak.

The first question, the T, – is what I’m about to say TRUE?  Or is it just a rumor, or mere speculation; or is there a basic truth to it that is undermined by exaggeration or being taken out of context?

Second, the H, is it HELPFUL?  Is it going to benefit someone, does it shed light, or does it make a problem worse or even create new problems?

Third, is it INSPIRING?  Is the person I’m talking to going to have their eyes, their souls, their imaginations lifted as a result of what I’m about to say.  Will it inspire them to see good things in others, or have their mind filled with positive thoughts and their heart encouraged about life?  Or will it cause them to lose faith in people or the God who created them?

Fourth, is it NECESSARY?  What I’m about to say may be true, but do other people really need to hear it?  Is the world really crying out to hear what I think about this person or that event?

And last, is it KIND?

To look at it another way, how about speaking to other people in a way that honors their divine image.  We’re not just mammals, we’re not merely apes.  We are God’s ultimate piece of handiwork, created by him to be like him.  There is a little divine spark in each of us.  Even the people we don’t like.  And if we are made with God’s hallmark stamped on us then each and every person deserves respect and kindness, regardless of what they have done.  The people who irritate me deserve my gracious words not because they are perfect or because they have treated me well; they deserve my kind words because they are made in God’s image.

Now that is more than enough challenge for one sermon.  Let me finish with something more uplifting.  Because there is an amazing opportunity to read this passage as an inspiration not a threat, and a source of excitement rather than a downer.  If it’s true that our words have the power to hurt and destroy, they also have the power to do good.  Great power.  You and I have a noble task, a grand calling – the gift of building people up, to strengthen, to encourage, to bless, to make others feel loved and cherished and respected.  Building God’s kingdom with our tongues.

Words create and transform.  In creation God spoke and things came into existence.    And like God, our words can create, not to the same magnitude, of course, but we can still create joy, and life, and love, and beauty through our words.  Sometimes when Jesus performed miracles in the Gospels he spoke, and things happened.  To a storm, he said, “Be still”, to a man with leprosy he said, “Be healed”, to the ears of a deaf man he said, “Be opened”, to a little girl who had just died he said, “Get up”, and to his dead friend Lazarus lying in a grave, he commanded, “Come out”.  And as it was with Jesus, so it is with us.  Our words can heal and transform.  Probably not with the miracles that Jesus performed, but our words still nonetheless have power to do good in small but life-giving ways.

The task goes deeper than just watching our words.  James implies it, and Jesus confirms it – the real task is let God change our hearts.  “Out of the overflow of the heart, the mouth speaks”, says Jesus.  A spring of fresh water won’t pump out toxic, undrinkable slime.   A fig tree doesn’t produce olives, nor does a vine produce figs.  The real work is not ours, but God’s – deep within us, changing the source into greater purity.  My French friend, whose name I don’t even know, shared a smile and a nod with me; and words – which despite being a language I barely know revealed a heart that was good.  May God perform that same work on us.