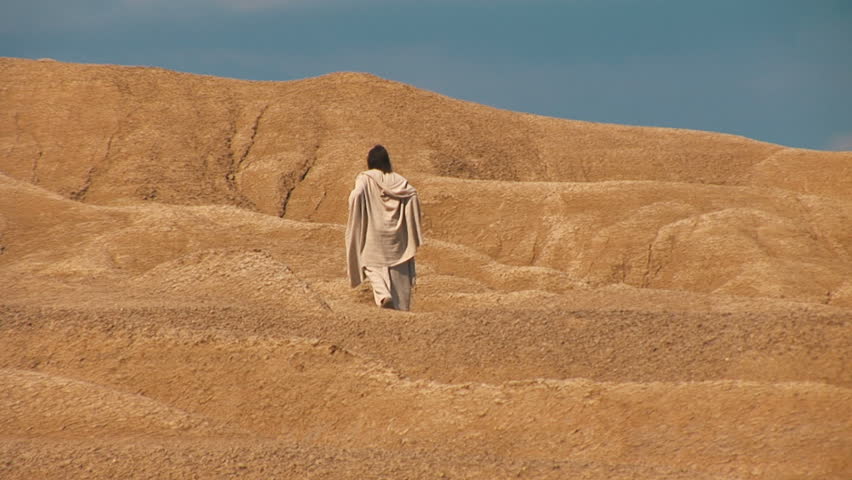 Voices in the Desert

“If you’re a Christian, aren’t you supposed to be loving and forgiving?”  Those words were spat at me by someone who was my friend, but who at that moment was acting more like a cobra squirting deadly venom at me.  These words stung.  No one enjoys being bitten – least of all by a friend.  But they also hurt for another reason.  They were true.  He was right.  We both knew it.  If I was a Christian I was supposed to be loving and forgiving.  So, not only did I have bitterness, I now had guilt because I had let Jesus down.  I’d been a terrible example to this friend who was not a Christian, and now, because of me, probably never would be.  So, in my remorse, like Judas, I ran outside into the night – and the parking lot.  Unlike Judas I vowed to make amends.  What could I do that would show him that I was truly sorry for the pain I’d caused?  Then it came to me in a flash of inspired brilliance.  I could make an unforgettable gesture that would remind him every single day of my sorrow.  I was standing just a few feet from his new car.  A beautiful red convertible.  His pride and joy.  For a few moments I admired its sheen, I smiled adoringly at its curves, I leered lustfully at its leather upholstery.  Although the windows were closed, in my imagination I inhaled that new-car smell wafting from inside.  And I then I got to work on leaving him my message of remorse.  I took out my car key and I scratched ‘I am sorry’ on the hood….  No, I didn’t.  It would’ve been fun, though, wouldn’t it?  ‘You wanna see how unChristian I can really be?’

You know that accusation, don’t you?  Often it comes not from the mouth of a friend but from a voice in your head.  Your very own District Attorney.  His office is in your brain, her knowledge of the law in comprehensive, and his familiarity with your life is intimate.   Your inner District Attorney travels everywhere you go, all day, pointing out your failures, reminding you of your moral frailty, accusing you of sins.  “If you’re a Christian you should not have just said that; you should not be thinking what you’re thinking.  If you are a Christian, you shouldn’t be going through difficulties in your relationships.  You should be happy all the time, and when you do experience a dry spell, you should remain cheerful and full of faith.  Call yourself a Christian?  Call yourself God’s beloved?  If you were God’s beloved you wouldn’t be struggling through this time of despair.  God would have healed you or changed your circumstances.  God’s beloved wouldn’t be the bad parent you are or the poor student, or the loser that you clearly are.  If you were God’s child you wouldn’t sin so much.”  Oh, let’s be clear, sometimes the DA in your head has a point.  Sometimes she is correct in her allegations.  Usually, though, he overstates his case, exaggerates your offenses, and, often she’s just flat-out wrong.  His accusations are malicious and not founded on truth.  But whichever type of allegation she levels against you, her motive is always the same – to undermine your confidence in God and to make you forget that you are God’s beloved.

Hear the Word of the Lord.  Lawyer up.  It’s the First Sunday in Lent, and we are in court.  So, too is Jesus.  Yes, our fellow accused is Christ himself.  The place of this courthouse is the desert, the charges could not be more serious, and the DA who prosecutes him is the father of lies, the enemy of God, the accuser of God’s people.    You’d think that in the desert you can’t hear voices.  There’s no one there.  But the opposite is true.  I went into the desert once, not in Texas or Southern California.  In our deserts you’re never too far from a highway or a hamlet.  No, I journeyed into the Sahara.  It was the quietest place on earth, but the noise was deafening.  When I got off the bus I was engulfed by the size of the desert, overwhelmed by feelings smallness, insignificance, and vulnerability.  There were no people apart from my fellow-travelers, and no animals.  A few hours earlier we had passed a single forlorn donkey underneath a solitary tree, but where we were now no creature could live and no plant could survive.  We were alone and overcome.  And then the voices started.  Not the voices of my fellow-travelers, who all stood in silence staring at the nothingness.  No, my DA showed up.  He often does in the silence, and there’s nowhere more silent than the desert.  The self-doubts, the fears, the lies, the accusations, the crazy, self-destructive thoughts.  The heat plays tricks on your eyes, but there’s nothing like being in the desert to deceive your ears.

Ewan McGregor knows.  In the 2015 film, “Last Days in the Desert” the Scottish actor played both Jesus and Satan engaged in a prolonged conversation in the wilderness.  He says of his time shooting the film in a Californian desert, “You think of a lot of things you don’t normally have time to think about. You think of things you thought were buried and away and dealt with, and they bubble back up and you realize they weren’t dealt with. Things from your childhood, your relationships.”

The wildest places are often inside our heads.  It’s there that the world’s bloodiest and fiercest battles are waged.  Before tyrants crush their people, they do so in their minds; before holocausts are unleashed, they are hatched in imaginations; before every little sin takes root in a life it has entered a brain and received a welcome.  People don’t crash and burn, they slide one compromise at a time, and the compromises begin with a thought in your brain.

In the desert no one can hear you scream.

In the desert there’s no one to tell you you’re loved.

In the desert the voice of the accuser deafens.

On this first Sunday in Lent we always read about Jesus in the desert, where he fasted from food for forty days, and where he endured a time of severe temptation.  The temptation to turn stones into bread, to throw himself from the top of the Temple in order to gain popularity, and the temptation to worship the devil in exchange for all power and all glory.  In other words, the urge to cut corners, the temptation to take matters into his own hands, and the lure to seek God in the wrong places.  Jesus is hungry, doubting, vulnerable.  If he were physically present today in Union County, Jesus would be right at home, because we live with these three urges, don’t we?  To cut corners instead of persevering, breaking some small rules of right living because the ends justify the means; the urge to take matters into our own hands, because waiting for God to act is so hard and waiting for someone else to take responsibility for themselves is unreliable; and the compulsion to seek God in all the wrong places, believing that we’ll find the beauty, perfection, and wholeness of God in a new possession, a new relationship, a new job, a new hobby, a new pay raise, a new look.

Barbara Brown Taylor talks about the value of giving up things for Lent.  She sees the stuff in life that we become attached to as painkillers.  We medicate our way through life with whatever it is – entertainment, substances, activities.  The call to follow Christ is the call to face the world as it truly is – without the anesthetic, without the props we usually we rely on to help us make it through the day.  And the desert is the place.  She says, “I am convinced that 99% of us are addicted to something, whether it is eating, shopping, blaming, or taking care of other people.  The simplest definition of an addiction is anything we use to fill the empty place inside of us that belongs to God alone.”

Welcome to Lent, and welcome to the desert.  You will find here everything you need, but not everything you want.  It will be our residence for 6 weeks.  Unpack your suitcase and make yourself at home – you’re going to be here long enough to create healthy habits, learn enriching practices, experience the love of God in a new way.  Don’t resent these six weeks.  In your hunger for resurrection, don’t resist their training.  For these 6 weeks can change you, if you enter them with intention, embrace the discipline, and live here.

Because we’re here by God’s design.  He has called us to this season of growth over gratification and depth over breadth.  Just as Matthew says that the Spirit drove Jesus into the wilderness, so the Spirit pushes us into this desert.  Yes, we will be tested and tried and tempted.  But for good reasons – to grow, to become stronger, to gain wisdom, to be more complete in our self-awareness and our God-awareness.  Can you handle this desert?  Yes, you can.  What kind of God leads his beloved into places where they will inevitably fail, where they will be harmed, where they will become worse people?

When the Union Pacific Railroad was being constructed, an elaborate trestle bridge was built straddling a large canyon in the West.  When the construction was finished the builders assembled a train with double the usual number of railcars and loaded them with more cargo than would ever be carried and then drove it to the middle of the bridge.  And there they parked it for the rest of the day. One frustrated worker lamented, “We spent all this time and money building this bridge, and now you’re trying to break it?” “No,” the manager replied, “I’m trying to prove that it won’t break.”  God leads us into deserts not to see if we’ll snap but to prove that we won’t.

Look at the last sentence of the Gospel lesson: Then the devil left him, and angels came and attended to him.  The final words in Jesus’ desert experience are hope and comfort.  And, by the grace of God, so it will be for us.