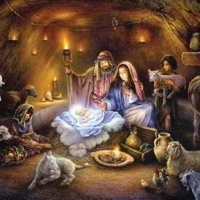 What are the Odds?

Thank you for coming here to share a night of miracles – of virgin births, strange stars, angelic concerts, shepherd VIPs, and God turning up as a baby. Have you ever wondered what the odds are of a virgin birth? Well, thanks to the London insurance brokers Goodfellow Rebecca Ingrams Pearson we need wonder no more. Because they have calculated the odds, rather stingily in my opinion, at just 10,000 to one, and they will insure you against the risk of it happening. Even more amazing than that is that 300 people have bought that insurance, paying the premium of 100 pounds. And if any of them do have a virgin birth, verified by an independent panel of gynecologists, the company will pay her 1,000,000 pounds. The company also insures women against becoming pregnant by an alien – and that policy has been bought by 723 people. The managing director of the firm sums it up perfectly when he says, “You must never underestimate the stupidity of the British public.” I’m here tonight to tell you that is sound advice.

A miraculous night. A night that changed the world. Glad tidings of great joy. What are the odds? But, as the people at that insurance firm will tell you if any of their clients ever have a virgin birth, Good News for one person can be bad news for another.

This Good News baby was a bad news baby, a polarizing baby, a baby whose very birth threatened to derail gravy trains. What are the odds? Because this baby arrived with a job description, and a resume. Centuries earlier, Isaiah in our reading from the Hebrew scriptures tonight prophesied the baby would be the Wonderful Counselor, the Mighty God, the Everlasting Father, the Prince of Peace. His authority, Isaiah continued, would grow continually, and there would be endless peace for the throne of David. So, this baby was bad news for those who opposed peace, those who stood to lose if God’s kingdom were to break out. Their comfort would be challenged, their power undermined. What are the odds? This child came to overturn the order of small hearts, the people who hated that first Christmas.

The Grinch hated Christmas! The whole Christmas season!
Now, please don’t ask why. No one quite knows the reason.
It could be his head wasn’t screwed on quite right.
It could be, perhaps, that his shoes were too tight.
But I think that the best reason of all
May have been that his heart was two sizes too small.

For Grinches and Scrooges –members of the order of small hearts, Christmas is terrible news. Because the biggest heart there could be – the heart so large it dreamed up planets and gave them birth, so huge it loved into life handfuls of dust that became you and me, so indescribably massive that it went to a cross to put us right with God, that unspeakably great heart somehow squeezed in the tiny chest of a frail newborn. At Christmas God snuck out of heaven and challenged the order of small hearts. Not in a way that drew attention to himself, you understand. That’s not the way God communicates with his world. But in a way no one would have expected. So quiet, so subtle, so totally unremarkable that if you had a small heart you would surely not have noticed. What are the odds?

The original Santa Claus knows all about being exploited for money. St Nicholas, Sinta Class, as you all know, was a real person, a bishop in the fourth century. His home town was called Myra in Turkey. Today it is called Demre. Now, St Nicholas is the patron saint of all manner of things, from sailors and children to barrel-makers and Russia. Each year thousands of Russian Christians make the pilgrimage to Demre to commemorate Nicholas. And in the year 2000, out of reverence for the great man, a Russian sculptor donated a bronze statue of St Nicholas that was proudly placed in the center of the town.

But today if you visit Demre you won’t see that sculpture. You’ll find an imposter. Because just five years after its installation, Demre City Council voted unanimously to remove the Nicholas and, in his place, set up a statue of Santa Claus. A ten-foot tall, red-suited, black-booted, white-bearded, rosy-cheeked, ho-ho-ho-ing symbol of what Christmas is all about. There, serenely placed in the middle of this ancient town square, watched over by the craggy Tarsus Mountains, nestling between arid olive groves and burgeoning pomegranate orchards, sweltering under the Turkish sun, stands Santa on his eight-foot column, bringing joy and love to all who pass by. Obviously, there are no reindeer or elves with him, because, well, that would be tasteless, wouldn’t it? And summing up this stroke of commercial genius, the mayor of Demre, Suleyman Topcu, said “this is the one everyone knows, it is a better fit with the business interests of this little Christmas-land.” The Grinch hated Christmas because his heart was too small. Scrooge hated Christmas because he couldn’t make money from it. I reckon Old Ebenezer needs to visit Demre and learn from Mayor Topcu how to exploit the money-making potential of the season. What are the odds?

If the Grinch and Scrooge are two members of a Trinity of small Christmas hearts, the third is no work of fiction, no figure of fun in rhyming couplets, no Victorian antihero spooked into a dramatic conversion. As far as we know this small heart never had a conversion. It was born small, possibly died small, and for the years in between it manifested its smallness. This heart was so tiny that the man in whose chest it beat heard of the huge-hearted baby, understood the challenge he was to his comfort and power, and so decided to indiscriminately murder babies in the hope of terminating the threat. There can never have been a Christmas heart so demonically small as the one that beat inside King Herod.

Grinchy, Scroogey, Herodian hearts. Like the inn, they are so small they have no room for God, no space for love. But it doesn’t have to be this way. In every generation there are big hearts who have beat with a different pulse. They were there in the shepherds, in Mary and Joseph, and they were there 104 years ago at the most extraordinary soccer match ever played. The venue was not the manicured grass of a European stadium. And there were no spectators to speak of. The teams didn’t play for a trophy, and the names of the players are lost in the mists of time. The pitch it was played on was a few dozen yards of mud in Ypres, Belgium. The teams were made up of soldiers from British and German trenches. And in a year in which we have commemorated the centenary of the War that the naïve believed would end war, I must tell you about the big hearts. This astonishing Christmas began when German troops emerged from their positions without their guns and decorated the area around their trenches. They lit candles and placed them on the barren trees. They sang Christmas carols. The British troops were understandably stunned but moved by this spectacle and put down their rifles. Several of them shouted out ‘merry Christmas’ to the men they had earlier shot at, and then climbed out of their trench and met the Germans in no man’s land. They brought with them cigars, chocolate and jam. They exchanged these luxuries with their enemies, who gave them gifts in return. They chatted using whatever pieces of common language they possessed. One or two poured a glass of Whiskey.

Each side hastily conducted funerals, and soldiers of both nations stood shoulder to shoulder and paid their respects to each other’s fallen. They prayed together and recited the 23rd Psalm, each man in his native tongue. And then a young German soldier produced a football. And the impromptu match began. The truce lasted all the next day. Combatants exchanged names and addresses, life-long friendships were formed. What are the odds?

And then, small hearts asserted their power. Senior British officers reminded their subordinates that they were there to do a job, and that was to kill. Sir John French and Sir Horace Smith-Dorrien vowed that no such truce would be allowed again. And for the remainder of the war, artillery bombardments were ordered on Christmas Eve to ensure that there was no further unseemly outbreak of peace. Troops were rotated through various sectors of the front to prevent them from becoming overly familiar with the enemy. But for one day, the big hearts, whose governments had put a rifle in their hands and who had been told they were doing it for God and King, beat loudly, impulsively, miraculously in that man-made hell. What are the odds? That the biggest heart of all, the one that beat in that cattle trough, that beats now for you and me, should invade a place so God-forsaken that 104 years later we are still shaken by its depravity. God did what God does – walks into the worst place of suffering that humans can create, the most evil abyss that demons can devise. So, let me ask you – What are the odds that the big heart of God can be born this Christmas, this very night in the suffering you are experiencing, the hell that you re enduring? What are the odds? 100%.

So, let me conclude this Christmas night chat
with a word to the man who wears the mayor’s hat
in that small Turkish town, where St Nicky was born:
“while you’re counting your money on this Christmas morn
Look past the credit cards, debits and cash,
To the big-hearted reason for this Christmas bash.
For today Jesus Christ, once a babe in a stall
Is exalted in heaven, the Savior of all.
He is Lord and he’s God, so worship today
He’ll inflate your cramped heart, drive its smallness away.
And then let him live there as father and friend,
He’ll warm you and keep you right up to the end.”