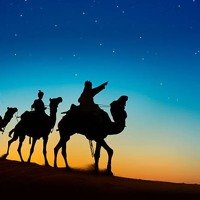 Like someone pushing a piano down the stairs when you’re sleeping; like a tank ploughing through the wall of your living room when you’re reading by the fire; like a marching band crashing your wedding in the middle of you making your vows, Epiphany has just invaded and ended our Christmas spirit. The cattle have ceased their lowing and our peaceful vigil by the crib of the newborn king, is abruptly and shockingly terminated. The shepherds have returned to the hillside, the angels ascended to heaven, and Mary and Joseph face lives that will never be the same.

It’s the Feast of the Epiphany, January 6th, the day after the twelve days of Christmas. It’s a day for unusual visits – strange visitors, with even stranger gifts. It’s a day for seekers, near and far – whether they be wise men from the East, prudent women from the West, or astute children from the North and South. It’s the Feast of Seekers. How wonderful to have a day when we honor and celebrate the millions of people who feel there must be more to life than this, who have that deep inkling that there is something out there and that he/she/it is calling them, drawing them, beckoning them home; who know in their souls that life has a meaning and they must find it, that they were born for a purpose, and they must discover it.

Those seekers in the Gospel lesson – the Magi – were astronomers, and foreigners. They were not even members of God’s family but were likely Zoroastrians – followers of an ancient religion that, like Judaism, Christianity, and Islam teaches that there is one God. They peered into the sky to get clues for their seeking. And now they spy a new, shining, stellar clue that something wonderful and earth-changing was being born in the mind of God. Seekers after stars, seekers after truth, and now seekers after a king. They interpret the new star as a sign of a new leader’s birth, and they’re off, they mount their camels and follow the star. They mean this. They’re quick, decisive, they take risks, they spend great resources of time and money, they are seekers.

So where do you go when you are seeking a royal baby? Well, to the place where royalty lives. You go to the most important city, and you go to the palace. And so, the Magi gallop to Jerusalem. Of course, they do. It is the city of God, the focus of prophecy, the place from where King David had ruled. But when they arrive, there’s no baby. As Matthew puts it, “wise men from the East came to Jerusalem, asking, “Where is the child who has been born king of the Jews? For we observed his star at its rising and have come to pay him homage.” In fact, they’ve missed him by nine miles. That’s the distance from Jerusalem to the real birthplace of the young prince, Bethlehem. To encounter the King, you have to go the whole nine … miles.

That’s the thing about seekers. They often start by looking in the wrong place. True seekers peer into their telescopes, see a multitude of stars – the stars of career, pleasure, hobbies, wealth, relationships – none of them bad, in fact all of them gifts from God, but they are distracting stars, stars that promise the heavens, but leave us with a hunger like a black hole and seeking something else. True seekers embrace these things, they live with them gratefully, but they are courageous and clear-sighted and so they admit to themselves that despite enjoying these things, they still haven’t found what they’re looking for and their seeking continues.

Nine miles later, and the seekers find their newborn king. And they present him with lavish gifts, costly gifts, unique gifts. When the market closed on Friday gold was trading at $1,285 an ounce. It’s rare. If you took all the gold that has ever been mined, melted it down and formed a cube, each side would measure just 18 yards – one-tenth the size of the Washington Monument. But gold has always been worth more than its weight in gold because of how it speaks – with the aristocratic diction of royalty, the booming voice of power, and when it is formed into a ring, it speaks with the tender accent of love. Those other gifts also speak with clear voices. Frankincense is an essential oil used widely today in aromatherapy, but at the time of the magi, it was burned as an aid to worship. And myrrh? Well myrrh is perhaps the strangest gift for a baby, for its voice is death – it is a resin used in the preparation of bodies for burial. This baby, it seems, is more than a king. This child is born for a mission that will culminate in his sacrifice and death. And let’s not forget that at this moment the magi are being used by a manipulative and murderous King Herod who says, “When you find him tell me where he is so I can come and worship.” God have mercy on you Herod, because I don’t think I can. Yes, the piano is crashing down the stairs, crushing whimsical sentiments of babies and cuteness.

Seekers. You’ve got to love them. They are sincere and motivated. They sometimes visit odd places before they find what they’re seeking, but they press on, and when they do discover the king they seek they give him all they have.

I think I know what I was seeking that June morning last year when Gelind and I boarded the train in London that would propel us through the Channel Tunnel and into the beautiful city of Bruges. Like all tourists I was seeking a grand day out – seeing inspiring sites, eating new food, experiencing for a few hours the way of life of a people I’d had little contact with. But, like many seekers, what I received was not what I expected. Oh, we did see wonderful buildings, taste delicious food, and meet interesting people, but I found what seekers the world over know – when you seek with an open heart you receive even more. Truth be told, it began at 5 o’clock in the morning on the drive across London from our hotel to St Pancras Station. We met a seeker. A wise man from the East. Ali his name was, from Bangladesh, our taxi driver; a devout man, a good man. He talked to us about faith and goodness, joy and peace. Later that day he returned to our hotel and left a copy of the Koran for us at reception. Actually, this seeker embarrassed me because in his eagerness to talk about his seeking, he exposed the lack of mine.

But a legion of seekers awaited us in Bruges, in the square that graces the center of the old city. Among many breath-taking historic buildings stands a 900-year-old church – the Basilica of the Holy Blood. It takes its name from what is believed to be inside – a vial containing a piece of cloth stained with the blood of Christ. I really don’t know what I was expecting when we walked into the Basilica. Neither do I remember asking myself the question that most modern people would ask – “How can this really be the 2,000-year-old blood of Jesus?” For those few moments as we entered the church I was in a genuine state of confusion – what was I about to view, what criteria can I use to judge whatever scene I am about to behold, what tools do I possess to try to make sense of whatever lay enshrined in this extraordinary place?

Gelind and I took our paces at the back of the queue, and I was moved deep down where only God and I can see. Even now I can’t fully put my finger on why, but I think it was this – the seekers. The sincere women and men whose faith may not have been fully formed, that may have been mingled with folk religion, who may not have understood their faith well enough to say anything about it. But they were there, seeking. They’d come from all over Europe, and they waited in line, and so did we. They were quiet, prayerful. And when each eventually reached the head of the queue and the priest beckoned them to come forward and stand before the glass vial, their bodies and faces exhibited something I’d seen before – experienced before – the presence of God. And then Gelind and I reached the front of the line. And the priest silently glanced an invitation at me to approach the blood.

And as I stood there with hands held over the vial, and heart held open to God, I discovered many things. One was, if you ask: ‘Is this really the blood of Jesus?”, you’re asking the wrong question. The real question is “Am I open to seeing and receiving Christ everywhere I go, even when doing so seems at odds with human wisdom?”

Another thing I discovered is that I too am a seeker. Yes, I have found what I’m looking for – a reason to get up in the morning, an answer to the alienation I often feel inside, a solution to the dark feelings that often drag me to troubled places, a salve to my frequently guilty conscience, a way of living that transcends all human philosophy in its goodness, rightness, and wholeness, a relationship with God and a power to do the right thing by him and by other people. Yes, by the grace of God and the death and resurrection of Christ I have found what I seek. But not fully. I still seek heaven. I still look for a quality of holy living in which I don’t let people down, hurt those I love, and silence the Holy Spirit within me. I still yearn for the sense of completeness that I fleetingly experience but which often eludes me. I still struggle to know what I believe and fail to find the words to articulate it. I still survey my beliefs and how I live and am appalled at the chasm in between. So, I learned that I don’t stand above the seekers, as if they are on a journey, following a star, looking for God, and I’m not; I stand with them, as a fellow traveler. I may have been journeying longer than some, but shorter than others, my route may have taken me to places and given me experiences that have helped me find God but less so than some other people.

Here’s what I know. Wise folk sought Jesus, and they still do. It is still the first week of the year, it’s not too late to set our goals and fix our sights. Will you be a seeker? Will you search this year for Christ? Not just in the places where you expect to find him – like this building, this rail, this meal, but will you seek him in the other places – away from the king’s palace, removed from the glory, apart from the gold, in the stranger, in the powerless one, in the places where suffering lives and evil thrives. Get on your camel, let’s go seek.