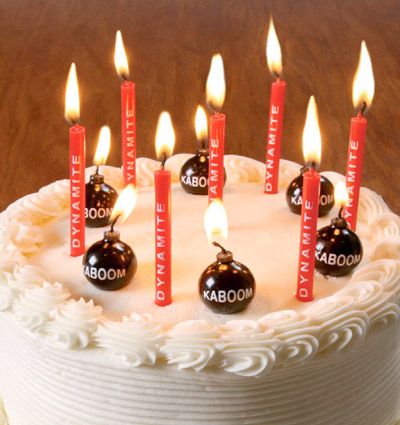 Let me ask, whose party are you attending?

Most of us can’t remember our second birthday, and Suri, now 10, probably can’t either, which is a pity because her parents Tom Cruise and Katie Holmes spent $100,000 on the party.  That is $17,000 on fresh flowers, $45,000 on catering from Wolfgang Puck, and $5,000 on the cake.  They hired professional actors to dress up as children’s characters, they rented some giraffes and elephants to entertain the guests, and they filled the party room with 1,000 butterflies.  For a two-year-old with the memory of, a two-year-old.

So, whose party are you attending?

The website Today’s Parent features the story of an exhausted mother named Sarah.  She is a veteran of throwing lavish and expensive parties for her children’s birthdays.  Last year, though, she found she had no time, and settled, as she saw it, for a single ice-cream cake, a lonesome kick-ball, and some simple paper decorations from the dollar store for her son’s 11th birthday party, at a total cost of $25.  She writes, “For two and a half hours, eight eleven-year-old boys careered through my house having the time of their lives. They waged war with the arsenal of Nerf guns my son already owns, played kickball in the street and raved about the deliciousness of the ice cream cake. Around the middle of the party, I suddenly found myself with nothing to do. I literally sat down and read a book.  As the party wrapped up, none of the kids wanted to leave. My son declared it one of his best birthday parties ever.”

Again, I ask, whose party are you attending?

Probably the worst birthday party ever was the one thrown by King Herod, in his own honor, of course, that we read about in today’s Gospel lesson.

Now, when it comes to basic human decency you don’t expect too much from the Herod family.  There are, in fact, four King Herods in the New Testament and only one of them was a good man, and sadly for John the Baptist, it isn’t the one who threw himself that party.  This one, whose skin John had very skillfully managed to get under, was one of the other three; and is the son of Herod the Great.  Herod the Great is the one who sent the wise men to follow the star and then slaughtered all the boys in Bethlehem under the age of two.  Well, his son was a chip off the old block.  The family business was state-sponsored terrorism, and this Herod inherited the shop.  Luke in his Gospel tells us that he murdered an unknown number of Galileans while they were worshiping, of all things.  But today, party day, it is John who tastes the depravity of this dynasty.

“Revenge is a dish best served cold”, they say, but Herod and his wife were probably taking things a bit too literally.  Too much wine, a provocative dance, and John’s head is on a silver platter.  A satisfying feast for the eyes of Herod’s wife who had resented John’s earlier criticism of her adultery.

But like many tyrannical leaders, Herod’s insecurity wasn’t too far below the surface.  Beneath his kingly façade beats a heart that knows he sinned when he killed John and fears the judgment of a just God.  So, when another popular preacher shows up and says the same sorts of things as John, then the sleeping dog of Herod’s guilty conscience may well be prodded.  And so along comes Jesus, God’s chief conscience prodder.  And Herod is scared.  So scared that he starts to believe in zombies.  “This is John back from the dead; (and in parenthesis – and I’m in deep trouble.)”

People were bemused by Jesus.  Who was he, where did he get his authority from?  There were theories, some of which sound rather strange to us.  There’s Jesus Number One – one of the Hebrew prophets – 600 years dead, but now striding through Judea.  Will they pick Jesus Number Two – the Father of Prophecy, Elijah, dead for 800 years but now back on his chariot of fire?  Or Jesus Number Three – dead just a few months, but hasn’t lost any of his magic – John the Baptist.  I guess most people just couldn’t imagine the Real Jesus.  He defied their expectations and burst open their categories.

So, let me ask it again – whose party are you attending?  I don’t think I’d fit in at the $100,000 Hollywood party for a  two-year-old.  I wouldn’t know what to wear, although it would be cool to meet the elephants.  The $25 party is more my cup of tea, especially the ice-cream cake.  But I’d even choose the Hollywood bash ahead of Herod’s narcissistic, homicidal celebration.  I don’t want to be there because I’m afraid that I would choke.  I fear that I’d get cold feet, hide my light, chicken out, go silent and look at the floor when Herodias asks for John’s head.   I am terrified I’d not stand up for truth, goodness, life, and justice.  I have seen myself do this often enough that I can’t confidently predict I’d be a hero.  I know what should be done.  I should step forward and with the greatest respect, but with courageous clarity ask Herod to spare John.  And if that resulted in my personal suffering, then I should be prepared to receive it.

I remember at school I repeatedly turned a blind eye when someone was being bullied.  I feared the sting of rejection, if I had intervened on behalf of the victim.  Forty years later I remember his name, and the name of the bully, I remember the shame I felt when I turned aside and pretended not to see.  I remember talking with a friend and deciding that we should really do something about it.  You see, at Herod’s party there’s nowhere to hide.  At Herod’s party your true colors are displayed for all to see.  Herod’s party is where the wheat is separated from chaff, where the sheep are set apart from the goats, where the brave are sifted from the cowardly, where the people who are prepared to suffer for the sake of Christ and his standards stick out like sore thumbs.  And that’s why I’d rather hang out with the elephants at Tom and Katie’s mansion than go to Herod’s party.

Whose party are you attending?

I’m in awe of John the Baptist.  In awe, but also uncomfortable.  But then, I think that is point of John – to make people feel uncomfortable.  Directly challenging the powerful on their ethics and morals is not something I want to do.  Actually, in our time and place, challenging the powerful is not very costly.  Social media makes it dead easy for all of us to scream our disapproval of the powerful every day of the week, without consequences, without accountability, without persecution, and without taking any responsibility for creating change.  We are a society of Waldorf and Statlers.  Theater critics sitting smugly in our private box, cynically ripping the performers, but seeing no link between their ethical failures and our own.  In a democracy, we get leaders in our own image.

For John, it was different.  For John, speaking out meant prison and death.  At Herod’s party, standing for what’s right has painful consequences.  Across the world and through the millennia countless Christian martyrs have stood tall at Herod’s party, spoken for the victims, protested for God’s standards, held up a mirror to the powerful, and met same fate as John.  We 21st century American Christians sometimes think we are persecuted, but actually all we’re experiencing are the death throes of Christendom, the age when the church enjoyed special influence and status.  Now that is ending.  But what we experience is not persecution.  Not head on a platter kind of persecution.  There’s another party I don’t want to attend.  A pity party for the church.

One of the greatest stories of a twentieth century martyr begins in 1941, and an ordinary Roman Catholic priest from Poland, who did extra-ordinary things.   Maximillian Kolbe was his name, and he was sent to Auschwitz for the crime of protecting Jews from the Nazis.  A few months after his imprisonment an inmate from Kolbe’s bunker escaped.  Now, the camp had a rule that if a man escaped, ten prisoners would be killed in retaliation; and true to their demonic word, the guards took 10 men at random from Kolbe’s bunker and led them to the starvation cell, where after a few days, they would die from dehydration.   As the men were being led away one of them, a young man named Francis Gajowniczek, cried out, “My poor wife! My poor children! What will they do?”

To the amazement of the onlookers Kolbe stepped forward, took off his cap, and said to the commandant, “Let me take this man’s place. I am old. He has a wife and children.”  The officer agreed.   Gajowniczek was returned to the ranks, and the priest took his place.  During their final days in the starvation cell Kolbe lifted the spirits of the others with prayers, reciting Scripture verses, and by leading hymn sings.  After two weeks, four men were still alive, but the cell was now needed for other prisoners, so the camp executioner came in and injected each man with a lethal dose of carbolic acid.

So it was that Maximilian Kolbe was executed on August 14, 1941, at the age of forty-seven. But his story doesn’t end there.  On October 10, 1982, tens of thousands of people stood in St Peter’s Square, in Rome in honor of the late Fr Kolbe.  And standing among them, with his wife, children and grandchildren was Francis Gajowniczek, the man for whom Kolbe had given his life.   Gajowniczek was eventually to die at age of 95 but for as long as he had breath in his lungs, he considered it his duty to tell anyone who would listen about the heroic act of love of Maximilian Kolbe.

Today an invitation drops through our letter boxes.  The stamp is from a country you don’t recognize, the return address seems exotic to you.  You scramble to open the envelope, wondering what it contains, and who is it from.  Your intrigue is peaked when you see it is an invitation to a party.  It is being thrown by Herod.  How do you RSVP?  Do you drop it in the recycling?  Or do you courageously, sacrificially, selflessly decide to go.

You’re going to need that courage, because when Herod throws a party, the pressure is on.  You’ll see things that will provoke you.  You will hear the small voice of Christ prodding you to speak – to defend the victims, to demand justice, to point to the standards of God.  Where you going go?  Herod’s party.  We must.  We can’t miss this opportunity to be salt and light in God’s world.  It’s why we were born.  So, let’s pray for courage, wisdom, sensitivity and let us party up.