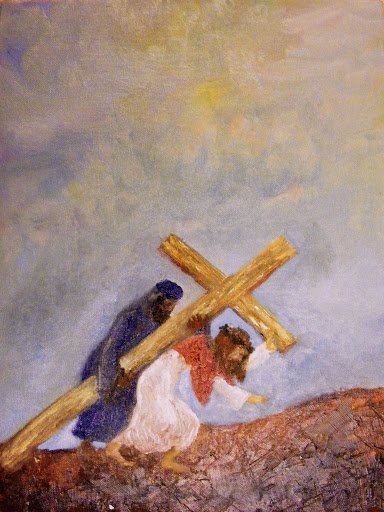 Some people with way too much time on their hands have done a survey into what people have given up for Lent this year.  They conducted their research via Twitter.  In the week beginning February 14th they received over 24,000 tweets, naming what people are giving up.

But, according to Twitter, the number 1 item people are given up for Lent this year, with 911 tweets is – Twitter.  That’s 911 people who have also given up telling the truth or who have taken up for Lent a refreshing sense of irony.

Of all those 24,000, it’s the 99 I’m interested in.  The 99 who said they were giving up life.  I wonder.  I expect some of them, maybe 98 of them, were being flippant, having a laugh, messing with the researchers.  But maybe one – one out of 99, one out of 24,000 really gets it.  I mean gets it in a profound and somber way.  Maybe this one has read their Bible, maybe she or he has stumbled upon this passage that we just read from Mark.  Maybe this one out of 24,000 has contemplated Jesus’ words, and maybe he or she has decided to take them seriously and to live their life accordingly.  “If any want to become my followers, let them deny themselves and take up their cross and follow me. For those who want to save their life will lose it, and those who lose their life for my sake, will save it. For what will it profit them to gain the whole world and forfeit their life?”  What are you giving up for Lent?  How about your life?

Because, Jesus promises, if you do you’ll get it back.  Not just the same old life, but a renewed, refocused, restored, upgraded model with added features, like peace – with God and with other people, a clear conscience, rest for your searching heart, an assurance that your life has meaning, that you have a glorious purpose in the vast mind of God.

One of the early Fathers of the Christian Church by the name of Tertullian was visited by a silversmith who had spent his life making idols for people to worship.  The silversmith became a Christian and came to the painful realization that his new-found faith in Christ was in conflict with his career.  “Tertullian,” he cried, “If I stop making idols, I’ll starve.  I have to live!”  And Tertullian answered, “Do you?”

Rarely has anyone uttered three more challenging sentences than those announced by Jesus.  If we were to sit down and write three statements that would cause trouble and discomfort for 21st Century Western people we would probably not be able to outdo the three we just heard.  If you want to keep your life you’ve got to give it up, if you want true happiness you’ve got to make the condition of your soul your number one priority, and if you truly want to be a follower of Christ then you have to die.  Not your physical death, of course, but we must die to our old ways of thinking, and talking, and living.  That self-centered, hollow, shallow life that the world around us tells us is our birthright and our duty.  Dying to selfishness and rising to a new life with new priorities.  C. S. Lewis wrote, “Christ says: give me all. I don’t want only so much of your time or money or work, I want you. No half-measures are good enough. Hand over the whole self, all the desires which you think innocent as well as theories you think wicked – the whole outfit. And I will give you a new self instead,”

If we’re following him then we will be choosing to do things we’d rather not do – like loving and forgiving and serving.  And we will be saying things we find hard to say – the gracious thing, the compassionate thing, the peace-making thing.  So what should be our response to the challenging words of Jesus?  Well, how about this: “Am I experiencing any pain as a result of choosing the way of Christ?  And if not, why not?” Because you don’t have to look too hard for ways to carry the cross. Just choose love, truth, purity, integrity, and justice, and suffering will find you.  No one ever got into bed at night and thought “today I walked the way of Christ and everybody loved me for it.  Today at work I took a stand for what was right and everyone thanked me.  Today I denied my selfish instincts and the world watched in admiration.”  No, the chances are that when we do walk the way of Christ, make a stand for truth, justice, and compassion, the world will either not notice or it will despise us for it.

But this seems all so extreme, doesn’t it?  You know, this might be fine for really keen Christians, but we’re Episcopalians.  You know, we do things differently.  We don’t get too excited by our faith.  We mustn’t get carried away, but remain balanced.  Find a middle way between enthusiasm and apathy.  The Episcopal Church has many weaknesses but enthusiasm is not one of them.

A 12th-grade student was applying to college.  She didn’t consider herself to be the most assertive of people, and so her heart sank when she read a questionnaire that one of the colleges had sent her.  “Are you a leader?” asked the questionnaire.  So, she wrote what she thought was the honest answer – no, completed the rest of the application, and mailed it.  A month later she received a letter from the college.  She feared the worst, but opened the envelope to read this: “This year’s application forms reveal that the college will have 1,452 leaders in our freshman class.  We are accepting you because we feel it is vital that they have at least one follower.”

‘Deny yourself’.  Deny yourself?  Let me add the surgeon general’s health warning to that phrase.  Because failure to understand it properly has led many Christians to beat themselves up in a way that is not honoring to God.  A rather impressive example of this is a 5th century saint called Simon Stylites, who sat on a pillar in the desert for 30 years, eating only lettuce and drinking only water.  Well, it’s not for me to say that St Simon misheard God, but I do feel fairly confident in telling you that God is not calling YOU to sit on a pillar in the desert for 30 years, eating only lettuce.  We all know about St Francis of Assisi for his love of God’s creation and his desire for peace, but he also whipped himself regularly and wore hair shirts because he thought that enduring physical pain would make him more like Christ. Other Christians have taken very harsh attitudes towards all kinds of physical pleasure – no entertainment, no rich food, not enough sleep – all these have been seen as part of following Christ. So let me say this is not what Jesus had in mind when he called his followers to self-denial. God is not honored when we inflict physical pain on ourselves. God does actually want us to enjoy life. And he wants us to take care of ourselves – in body, mind and spirit.  He has given us a lavish abundance of good things for us to enjoy and we should appreciate them with thanksgiving. So self-denial is not self-hatred. No, Christ’s is a call to get our priorities straight, and if the good gifts God has given us start to get uppity and encroach on God’s throne then we should take swift and decisive action by tearing them from the throne and putting them somewhere else.  The suffering we must endure for Christ is the suffering that comes from saying ‘no’ to our selfish impulses and ‘yes’ to the way of love and service.

The artist Rodin was out walking when he came across a huge, carved crucifix at the side of the road.  He immediately fell in love with the beauty of the artwork and the skill of the sculptor.  So he asked around to find out who owned it, so he could buy it for himself.  And eventually he did purchase the cross and arranged to have it carted back to his house. But, Rodin had miscalculated, and the cross was too big for his home. So, what do you do?  Leave it in the front yard where you can glance at it out of the window and tip your hat to it when you leave the house?  Do you donate it to a museum, where others can admire its beauty, but where it is also out of your sight?  Do you take it back to the original owner and try to get a refund?  Well, if you’re not that into the cross you might.  If it is just a passing thing of beauty to your eyes, then sure, you could do those things.  But if you were sold on it, if you longed for it, if you were willing to make sacrifices for it so that it could be the center of your life, then you’ll do what Rodin did.  He demolished the roof, knocked out the walls, and set about rebuilding his home around the cross.

It’s tempting to want a small, tame, domestic cross.  A cross that can fit neatly into our lives without too much inconvenience.  Big enough to notice and to show off to the neighbors and guests; but not too big.  I don’t want it to get into the way of me doing my own thing.  This morning, this Lent, this trying season of pandemic, let’s explode the walls and rebuild our lives around the cross.  Because “If any want to become his followers, let them deny themselves and take up their cross and follow him.”